RBG died, and the tears flowed 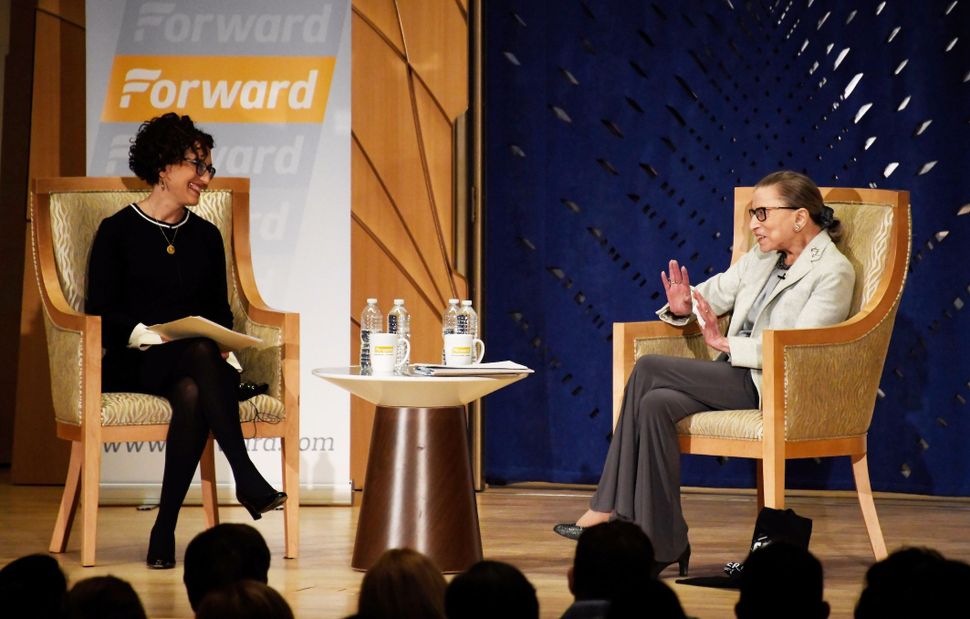 We were in the kitchen, cleaning up after our small, simple Rosh Hashanah dinner, just the immediate family, stripped down to the fundamentals: honey, challah, wine, chicken, joy in being together. I did not look at my phone all evening.

Then a daughter walked in. RBG had died.

And the tears flowed.

I was privileged to have interviewed Justice Ruth Bader Ginsburg on a synagogue stage in February 2018 in Washington, D.C., before thousands of people, an experience that instantly soared to the top echelon of my professional life. I read countless books and articles to prepare, watched documentaries and videos, poured through transcripts and legal opinions. I wanted to really know this woman, who had, in the years since her beloved husband’s death, allowed herself to become a feminist icon and a well-exposed cultural celebrity.

But that’s not what I was after, not what I wanted to reveal and present. I was Editor-in-Chief of The Forward, and interviewing her at a synagogue: I was interested most of all of in who she was as a Jew.

In the wake of her tragic death — and yes, though hardly unexpected, in this ugly, divisive moment it is a civic tragedy — many will catalogue Ginsburg’s extraordinary legal accomplishments and political significance. What I want to acknowledge is her important place in American Jewish history.

Ginsburg represented the apogee of Jewish achievement in this fraught land. As unique as she was, she also was an archetype, the epitome of what America had to offer a wandering, battered people. Born in 1933, as fascism began its brutal march across Europe and as the Depression still blanketed the world economy, Ginsburg also faced adversity at home. Her only sister died when she was very young. Her mother died just as she was set to graduate from high school.

Women with brains and drive were excluded from power, legally considered second-class citizens, rarely allowed to even glimpse their own potential.

But she would have none of it. Quietly but firmly, she pushed back against barriers by working harder than anyone else, supported by an amazing husband, and fortunate to come of age when being Jewish was no longer the hindrance it had been only a short time before.

The virulent antisemitism that had plagued the United States in the immediate postwar years gradually gave way in the 1950s, as advocates used the law to break down discrimination against Jews in housing, education and employment. Ginsburg worked the same levers, doggedly seeking to turn over the laws that discriminated on the basis of sex.

She was not a revolutionary. She worked within the system to change the system, to make it more fair and just, to extend protections to those who needed government the most.

This was the quintessential Jewish aspect of her character. Yes, she was raised a Jew, married a Jew, belonged to a synagogue, supported Jewish causes, here and in Israel. But more than that, Ginsburg epitomized the liberal intellectual ideal that has come to characterize so many modern American Jews — grounded in the belief that American institutions will bend toward justice if presented with unassailable rational arguments, and that they can best be led in that direction from within.

Only because the Supreme Court lurched in recent years to a hardline, unforgiving brand of conservatism did Ginsburg seem like a flaming liberal. It’s easy to forget now that her appointment was initially a disappointment to many feminists, who worried about her dogged, incremental approach to the law in its social context.

But that approach is what enabled her to reach the pinnacle, and it’s what has stood as a beacon to generations of American Jews who wanted to believe that their lot, and the lot of their less fortunate neighbors, could be improved by deliberate, moral persuasion.

That era might now be over. It seems fitting that she died as Rosh Hashanah came in and a year of pain and sickness and utter despair was closing. Already, the battle lines are forming over the chair that she has left empty — a chair that dwarfed her diminutive frame but could never contain her enormous mind and heart.

She’s left us no choice but to carry on her legacy, but the challenge is enormous. Ginsburg represented an ideal of American Jewish liberalism that recoiled at the unbridled, unprincipled exercise of raw political power. And that is what we are facing now.

Jane Eisner is director of academic affairs at the Columbia School of Journalism. She was editor-in-chief of The Forward from 2008 to 2019.