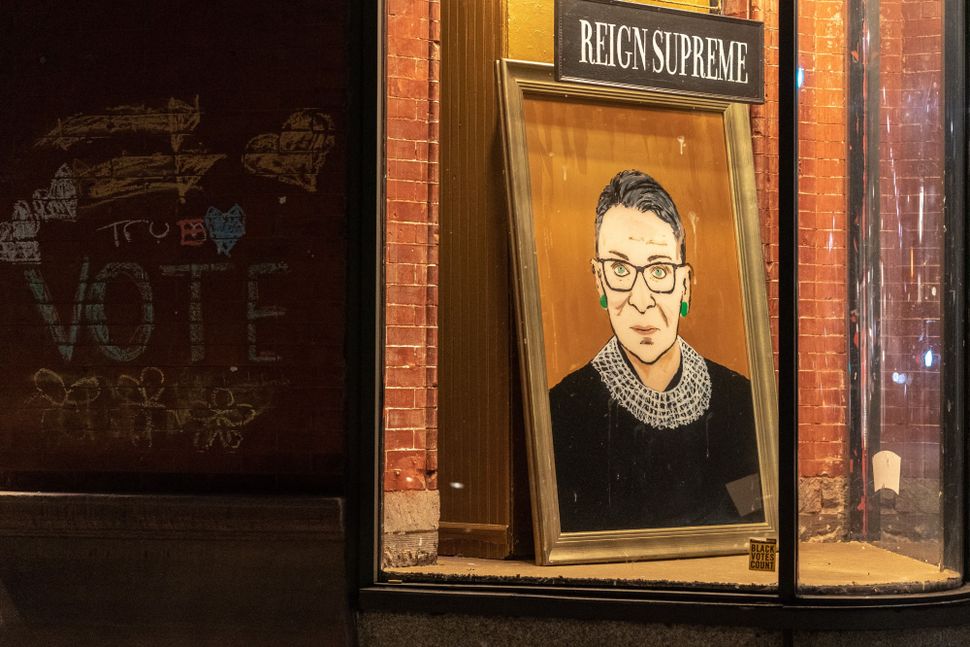 Jewish tradition says this is the most auspicious time of year to die.

The idea, as I understand it, is this: If God is deciding during the High Holy Days who shall live and who shall die over the next year — inscribing and then sealing us all in the imagined Book of Life and Book of Death — then those who die close to the next High Holy Days are the ones God granted the most time. In this thinking, Ruth Bader Ginsburg was doomed to die during the Jewish year 5780, but nonetheless was allowed to live — and so very fully — almost until the year 5781 began.

I learned this when my own grandmother died on the morning of Erev Yom Kippur in 1997, and invoked it to comfort my husband when his father died three days before Rosh Hashanah in 2016. Now the world is learning it, for the whole world mourns Ginsburg: I was asked in the hours after her death on Friday evening whether it was permissible for non-Jews to say Kaddish for her.

Ginsburg embodies this concept in a secular context, too. If the universe had determined she would die during President Trump’s tenure, she persisted until practically the end of this tumultuous four-year term. In and out of the hospital, facing grim diagnosis after grim diagnosis, she battled on, not just surviving but always returning to the intense work of the bench — and the gym; she was famous almost as much for her planks as for her principled dissents.

Just a few weeks ago she officiated at the (outdoor!) wedding of family friends. NPR reported Friday that she had told her granddaughter in her final days that “my most fervent wish is that I will not be replaced until a new president is installed.”

There are so many parts of Ginsburg’s life, career and character for us to learn from and be inspired by. The way she soldiered through the sexism and antisemitism that limited her early employment opportunities. How she balanced early motherhood with acing Harvard law school. The glorious, egalitarian, passionate partnership she shared with her husband Marty. The pioneering of the feminist legal field. The planks!

But for me, as much as any of her legal opinions, Ginsburg’s close friendship with the late Justice Antonin Scalia is core to her legacy. Much has been written about this odd couple — she a tiny Jewish woman whose squeaky voice was heavy with her native Brooklyn, he a heavy Italian man who sounded like his native Queens; her fierce liberalism and his staunch conservatism that landed them on opposite sides of most decisions; their mutual love of opera, the special opera created to chronicle their bond.

At this most divisive moment in our politics, as we enter the last six weeks of this critical campaign, Ginsburg’s death has instantly become the ultimate wedge issue. Mitch McConnell, the Senate Majority Leader, has vowed to bring a Trump nominee to a vote despite his and other Republicans’ refusal to do so when a seat was vacated in President Obama’s last year in office — and warned his colleagues not to lock themselves into any position. Both sides are undoubtedly calculating whose base an open Supreme Court seat motivates more.

It’s instructive, inspiring in this context to hear Ginsburg’s own words about her relationship with Scalia.

“I disagree with a lot of what he said but I was totally captivated by the way he said it,” she said in a 2018 interview with Jane Eisner, my predecessor as editor-in-chief of The Forward.

She spoke about how he would crack her up with whispered side comments when they sat on panels together on the D.C. Circuit Court of Appeals. About New Year’s parties where they ate venison. And about the comic opera, titled “Scalia-Ginsburg,” where his character gets “locked up in a dark room” for “excessive dissenting” and hers enters through a ceiling to save him.

“I say, ‘He’s not my enemy, he’s my dear friend; yes, we are different but we are one,” Ginsburg told Eisner. “Difference in the way we approach interpretation of legal texts. But one in our reverence for the Constitution and for the institution we serve.”

That’s the ultimate lesson of Ginsburg’s amazing life. The value of dissent, and the value of respectful friendship through disagreement. Those are the things we must hold as Trump and McConnell and the rest wrangle over the seat she leaves.

Jewish tradition calls one who dies at this auspicious time a tzadik, or righteous person. The Hebrew word shares its root with tzedek, the word woven in silk into the signature collar Ginsburg wore with her robe on the opening day of last year’s Supreme Court session — which turned out to be her last.

It comes from the Torah verse “tzedek, tzedek tirdof” — justice, justice, shall you pursue.

On these High Holy Days, in this most surreal of seasons, we must all pursue justice. Yes, we are different, Ginsburg said, but we are all one.