On the federal bench and carpool too? Amy Coney Barrett is making us working moms look bad 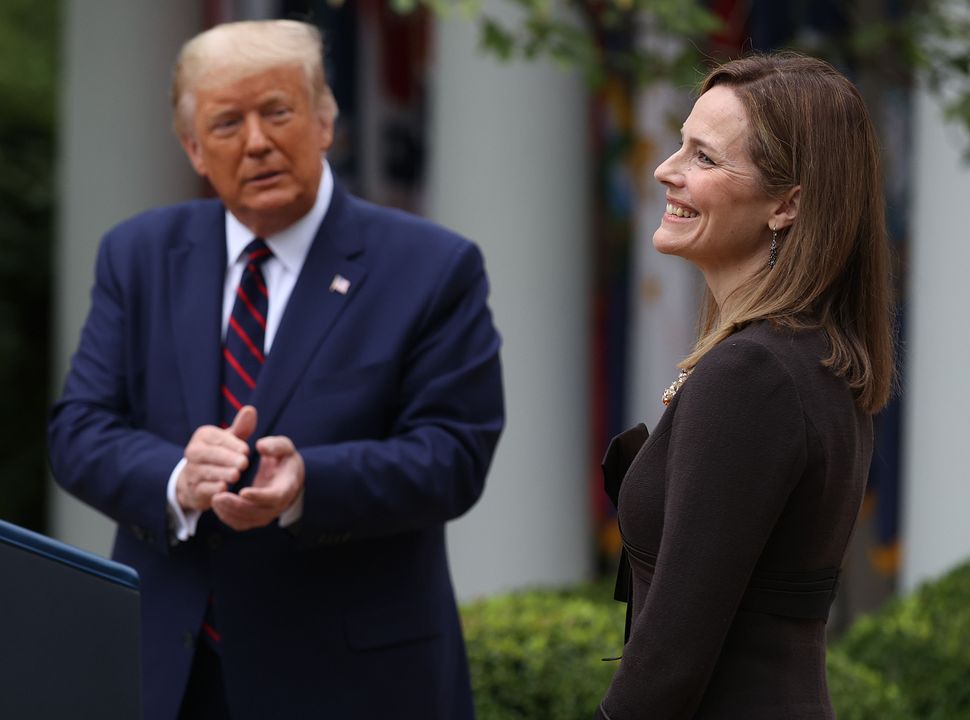 Amy Coney Barrett is bad for women. Her nomination to the Supreme Court might actually be a setback for working mothers.

I’m not talking about her anti-abortion ideology or her opposition to the Affordable Care Act. Let’s stipulate that reasonable people can disagree about such things. Even reasonable women: 38% of American women believe abortion should be illegal in most or all cases, according to a 2019 Pew poll.

There are of course many weightier issues around this nomination. Including how we as Jews should feel about the role her Catholicism plays in her jurisprudence. But I found myself distracted from the more serious questions on Saturday as she spoke on the White House lawn after President Trump nominated her for the Supreme Court.

“While I am a judge, I’m better known back home as a room parent, carpool driver and birthday-party planner,” Barrett said proudly.

Certainly there is much to admire in both Judge Coney Barrett’s resume and commitment to work-life balance. Two of her children are adopted from Haiti, another has Down’s Syndrome. She is tops at her career but knows what truly matters. She has it all — and for many, this makes her the ultimate role model.

But as an actual working mother, it makes me want to scream. Because I know most of us absolutely cannot have it all. Even those of us lucky enough to have partners who prioritize our careers and split parenting duties struggle daily with feeling we are falling hopelessly short at both work and home. Many working moms are solo parents juggling multiple jobs and need to be reassured it’s O.K. to put their kids on the bus.

And that was before the pandemic! Now, as the food writer Deb Perelman famously put it in a New York Times column that went viral in July, the frightening reality for many moms with young children is that “you can have a kid or a job” but not both.

Yet here’s Judge Coney Barrett, gleefully reporting that when schools went virtual, she and her husband, Jesse, “became co-principals of the Barrett e-Learning Academy — and yes, the list of enrolled students was a very long one!”

And here I am, feeling terrible about missing most of Family Movie Night (“Enola Homes”) to write this column.

In my town, the vast majority of the “room parents” — volunteers who help coordinate who brings what to Halloween parties — are people without full-time jobs, and many of the carpool drivers are babysitters. I am pretty proud of myself for showing up at school concerts and back-to-school nights. Last spring, I even prepared a presentation for middle-school Career Day — though it got canceled because of the coronavirus.

And birthday parties? One of the great gifts of having twins is that we generally only have one each year — I arranged for an ice-cream truck in the driveway a couple of weeks ago, thank you very much, along with a big lawn sign! Are you seriously telling me that this woman plans seven birthday parties every year and sits on the federal bench besides?

It’s too much. I thought ours was the generation that understood the tradeoffs. The one where high-powered career women — and men — sometimes take years off to parent full-time and our role as good feminists was to respect that choice, and to welcome them back to work when they were ready without any mommy-track penalty. The one where we forgave ourselves for not driving carpool.

Whenever I worry about falling short as a parent — which is to say, most days of most weeks — my husband and friends buck me up by saying what a great example I’m setting for my daughter, and especially for my son, by working hard at an important job that I love. One of my husband’s favorite stories is about the morning I tried to teach the kids, who were then about 6, how to sweep.

We were living in Israel then; my husband had quit his job as an architect when I’d been named Jerusalem bureau chief of The New York Times. “It’s especially important for me to learn,” said our son, Lev, “because mommies have the big jobs and daddies clean up the house.”

Over the last week of memorializing Justice Ruth Bader Ginsburg, one of the things that has become clear is how she embodied the working-mother dilemma. In the documentary “Notorious R.B.G.,” her children spoke of her laboring into the wee hours and sleeping all weekend — I don’t think she was a “room parent.” One of her former law clerks said that when Ginsburg marked her staff’s birthdays in chambers, it was her devoted husband, Marty, who made the cakes.

A Supreme Court Justice who makes her own cakes might just be a bridge too far. But at least Judge Coney Barrett said on Saturday that her kids prefer her husband’s cooking.

Jodi Rudoren is the editor-in-chief of the Forward. You can email her at rudoren@forward.com.

On the federal bench and carpool too? Amy Coney Barrett is making us working moms look bad