They criticized us for comparing Trump’s hate to the Nazis. Then he told the Proud Boys to ‘stand by.’ 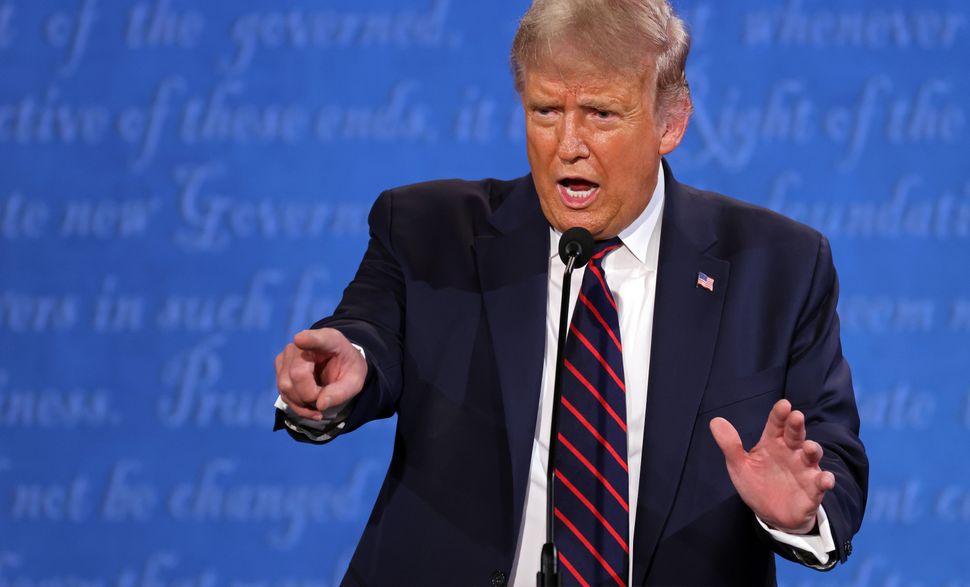 The Jewish Democratic Council of America, the organization which I lead, released a political ad on Tuesday highlighting the parallels between President Donald Trump’s use of hatred for political purposes and the rise of Nazism in the 1930s.

The ad, which juxtaposes images of Nazis inspired by Hitler with those inspired by President Trump, was viewed nearly 100,000 times in its first day. While it intentionally did not reference the Holocaust or Hitler, it drew attention to the rising insecurity of Jewish Americans as Trump consistently emboldens white nationalists and invokes anti-Semitic rhetoric, contributing to anti-Semitic incidents reaching an all-time high.

We were on solid ground in our comparison; as renowned Holocaust historian Professor Deborah Lipstadt put it, Trump’s attacks on “the press, the courts, academic institutions, elected officials and even – and most chillingly – the electoral process… deserves comparison” to early-1930s Germany. And Abe Foxman, a Holocaust survivor and former head of the Anti-Defamation League, defended the ad. “Germany did have institutions and they did have democracy and it did fall apart so, yeah, it’s not Germany, and it’s not Nazism, but our antennas are quivering,” Foxman told JTA.

“This deserves comparison” to early-1930s Germany, according to @deborahlipstadt. pic.twitter.com/Zi1DhChZ6c

But not everyone saw it that way. In a baffling and unfortunate development, some of the major Jewish American organizations came out against our ad. The American Jewish Committee claimed it was an “offensive” distraction “from the urgent need to fight Jew hatred” that trivializes the memory of the Holocaust’s victims.

The problem of antisemitism in the U.S. is grave.

Offensive comparisons between 2020 America and 1930’s Germany distract from the urgent need to fight Jew-hatred. They also trivialize the memories of both victims and survivors.@USJewishDems, take down this ad immediately. https://t.co/XpUrJ3AWDK

And the head of the Anti-Defamation League, Jonathan Greenblatt, insisted that references to Hitler have “no place in the presidential race.”

The video from @USJewishDems is the latest in growing references to Hitler, Goebbels or other Nazi leaders. This has no place in the presidential race and is deeply offensive to the memories of 6M+ Jews systematically exterminated during the Shoah. https://t.co/pvO89COrI6

So it was ironic to say the least when, just hours after the ad’s release, the President validated our message at the first presidential debate by refusing to condemn white supremacy — yet again. The president was explicitly asked by the debate moderator if he would condemn white supremacists and militia groups, and was encouraged to do so by Joe Biden, who pleaded, “Say it. Do it. Say it.” To this, Trump responded with an effective call to arms for a right-wing extremist group: “Proud Boys – stand back and stand by.” The Proud Boys naturally interpreted Trump’s message as marching orders for hate, creating a new logo that proudly declares “stand back” and “stand by.”

The president’s unconscionable refusal to condemn white supremacy only underscored the importance of JDCA’s ad. But we weren’t prescient; our analysis was based on things Trump has said in the past.

After all, his ugly comments during the debate are hardly the first time Trump has flirted with white nationalists. In 2016, he refused to repudiate the support of former KKK leader David Duke. In 2017, he equated neo-Nazis marching in Charlottesville with those peacefully protesting them as “very fine people, on both sides.” In 2018, he frequently invoked anti-Semitism and xenophobia in the lead-up to the midterm elections, some of which was echoed by the perpetrator of the worst anti-Semitic attack in American history at the Tree of Life Synagogue. This horrific violence was repeated exactly six months later at the Chabad of Poway. Just two weeks ago, Trump’s own FBI Director confirmed that white supremacy is “the most lethal” form of domestic extremism despite recent reports about the Trump administration’s efforts to downplay the threat.

It’s sad that despite all this, the ADL and the AJC felt the need to criticize our ad, which was so heartily vindicated just hours later. We recognize that parallels between today and the 1930s are grim and chilling, but they are real. We cannot wish them away, and Trump continues to remind us of the extreme danger of his words, as the AJC and ADL both confirmed in their condemnations of his debate performance last night.

It’s astonishing that, when asked a simple question, will you condemn white supremacists, @POTUS responded – “The Proud Boys should stand back and stand by.” Trying to determine if this was an answer or an admission. @POTUS owes America an apology or an explanation. Now. https://t.co/9tgufXom9K

As Maya Angelou famously said, when someone shows you who they are, believe them the first time. JDCA has repeatedly warned that Donald Trump is the biggest threat to American Jews in numerous ads dating back to November 2019, all of which feature the very neo-Nazis Trump incited from the debate stage. And Jewish voters agree. According to a recent poll by the non-partisan Jewish Electorate Institute, a majority of Jewish voters feel less safe than they did four years ago, and believe Jews will become even less safe if Trump is re-elected.

We are proud to speak truth to power, even when it’s difficult. And the truth is that the hatred emboldened by President Trump is an insidious danger to our community and our democracy, and that is why we are doing everything we can to elect Joe Biden and restore the soul of our nation in 34 days.

To our fellow Jewish organizations, we would like to say that the time for equivocation is over. This is no time to back away from the truth.

Halie Soifer is the executive director of the Jewish Democratic Council of America. Previously, she served as a national security advisor to Senator Kamala Harris, and as senior policy advisor in the Obama administration.

They criticized us for comparing Trump’s hate to the Nazis. Then he told the Proud Boys to ‘stand by.’