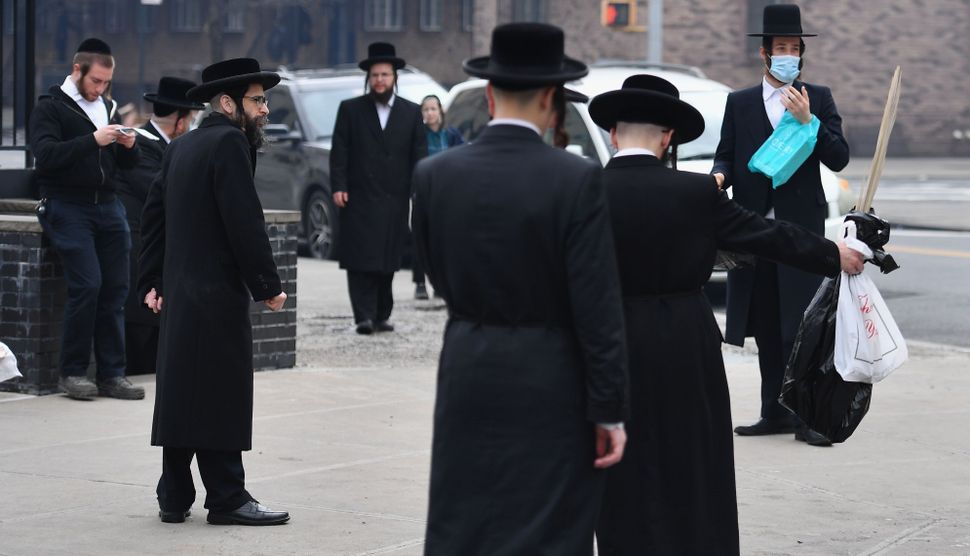 Orthodox communities in New York and New Jersey are in the midst of a COVID uptick. That much is undeniable. But what is also undeniable is that New York Mayor Bill de Blasio and Gov. Andrew Cuomo are botching the response, singling out Jews for the convenience and pleasure of antisemites.

These are politicians with long-standing relationships and a deep familiarity with the communities suffering from the uptick — relationships that if they wanted, could serve them in good stead. Cuomo and de Blasio have in the past communicated effectively with the Orthodox and Haredi communities.

That they are choosing not to do so now is painful. Worse, it means that their measures — viewed as unfair and punitive by a community that used to trust them — are doomed to fail, which will result in even more people getting sick.

Nobody doubts that there needs to be some intervention and a shift in how Orthodox and Haredi communities are “dealing with” COVID-19. What worked throughout the summer, when infection rates were low in these communities, is clearly not working now that rates are climbing again.

But there is a way to go about accomplishing that shift. This moment calls for engagement with community leaders. It calls for seeking to chart a way forward together in a responsible and achievable way. This is a moment to call upon those old relationships, using personal social capital to get everyone on the same page and beat back the coronavirus together.

Instead, Cuomo and de Blasio have chosen to single out Orthodox and Haredi Jews for punitive measures. On Sunday, during the holiday of Sukkot when Orthodox Jews were offline, de Blasio announced a plan to unilaterally shutter all schools and nonessential businesses in the nine ZIP codes which are primarily home to Orthodox Jewish communities. That he chose to do so when Orthodox Jews are disconnected entirely from technology and media, was only the bitter icing on the horrible cake he presented to the community he used to represent.

Meanwhile, Cuomo chose to highlight Orthodox Jews in his daily press conference, going so far as to post photos of Hassidim gathered by the thousands — including one photo from 2006, as Jewish Insider reporter Jacob Kornbluh pointed out.

Apparently the picture @NYGovCuomo put up in his presentation today of a “recent” large gathering in Satmar Kiryas Joel is from 2006 — the funeral of Rabbi Moshe Teitelbaum in Kiryas Joel! pic.twitter.com/CxGtHhyZUj

Pro-tip: When you’re trying to work with a community to make it safer for its residents, it’s best not to imply that the community’s members are all part of a single, interchangeable mass. That the photo wasn’t even taken in Brooklyn but in Kiryas Joel just added more insult to injury. (Hey, I guess we all look the same.)

But from the community’s point of view, this insult is not just devastating; it’s baffling.

“It just doesn’t make any sense,” one community leader told me today. “We are talking about someone who knows this community well. He first ran for City Council in this community — and won with our support. He knows that the most important things for this community are our educational institutions — and he knows that can be used to impact social behavior. But he also knows that shutting them down like this accomplishes nothing.”

Nothing, it seems, except to burn every bridge he has ever had with the community.

This community leader would only speak to me on the condition of anonymity, citing the sensitive nature of the issues at hand and the need to continue to try and engage with the Mayor’s office. Other community leaders I spoke with would not even talk about it off the record, for the same reason. They are still hoping to turn the relationship around. But hope is wearing thin.

“It doesn’t help that the community looks at this and sees things which look entirely punitive, using collective punishment to single out the Hasidic and Orthodox community,” the community leader told me. “What does it tell people in the community when there are 20 ZIP codes where positivity is rising, and he only focuses on the ones we live in? What does it tell people when he decides to shutter businesses, but has no plan for helping the people who own and work in them, whose incomes are going to be impacted by his closures?”

It doesn’t make anyone safer; all it does is turn shutdowns into punishments.

What is the point of imposing ineffective, punitive measures on a community that is in desperate need of actual solutions, actual help? And why would leaders who the community trusts squander their political capital in this way, sewing a sense of being singled out and endangered and thrown to the antisemites?

Perhaps they are seeking to look like they are “tough” on COVID, showing that they are willing to “crack down” on any community. And who better to use to make the point than a community which is easily identifiable and with whom you have a long-standing relationship everyone knows about?

I hope this is not the case. But as I said, hope is wearing thin.

Just recently, during the prayers we recited on Rosh Hashanah, there was an incredibly meaningful verse from Jeremiah as a part of the Musaf Amidah. In the section of Zichronos — “remembrances,” we implore God to overlook the iniquities all too common throughout our conduct over the last year:

“Go proclaim to Jerusalem: Thus said God: I accounted to your favor the devotion of your youth, your love as a bride — how you followed Me in the wilderness of the desert, in a land which was not sown.” (Jeremiah 2:2) The commentaries explain that this passage highlights our long-standing relationship with God, as if we are saying to Him, “Yes, we may have acted irresponsibly now, and we are paying for it. But as you weigh what to do with us, consider our history together. When we followed You into the desert to receive the Torah at Sinai, it was at a time when nobody else would.”

I’ve been thinking about this passage a lot as our failures as a community are being held up as an example by leaders who we were once close with. It’s not too late for them to turn this around.