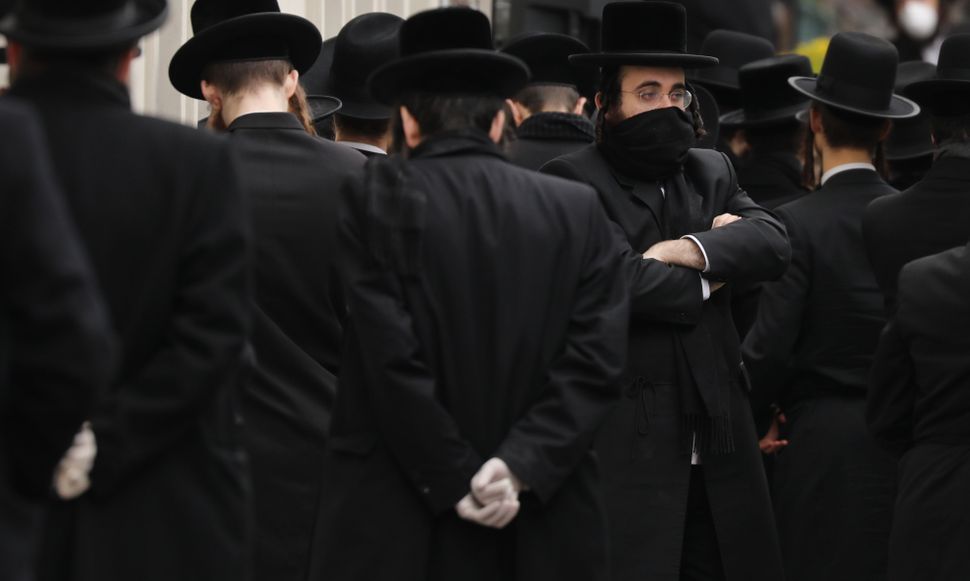 There’s been a rise in COVID cases among Hasidim, and the world is pointing a finger. See?

Hasidim have been ignoring COVID precautions, they’ve been doing their old (old) normal like nobody’s business, no masks or measuring tape or shields or baths of hand-sanitizer, and now naysayers are saying I-told-you-so with barely masked glee, pun intended: That’s what you get for denying science; the Darwin Award.

But in their gotcha glee, they miss an important point: We are at the end of September. What about the other months? Where was the rise in June?

I had a close Hasidic family wedding in the middle of the summer. Crowds of wedding guests of all ages came in pretty dresses and with sweet, full, open faces. The custom for women is to say “Mazel Tov,” shake hands, and kiss on the cheek. I sat next to my Holocaust survivor grandmother. Tens, maybe hundreds of women came up to her to offer their congratulations. She danced with little girls wearing great puffy dresses. I danced under-over and in the circle. I pressed into the sweaty palms of forgotten classmates who now have half a dozen kids or more. The music was loud enough to give you hearing loss, so we all bent into each other’s faces to scream our catching-up.

It’s many weeks later and my grandmother is fine. Everyone is.

I’m not an epidemiologist, so I can’t explain why that wedding and others that I saw in Williamsburg or reported on social media don’t seem to have resulted in a spike in cases this summer, or why we’re having one now. But I also have not seen any consistent reporting by scientists attempting to analyze these trends — nor consistent attention from government officials attempting to seriously engage leaders of Haredi communities to find social-distancing measures that we can live with.

Instead, what I have seen — and what naysayers and the media missed — is Hasidic communities doing their own COVID-19 experiments.

In March, they tried to lock down. My Hasidic Twitter feed was hectic and depressing. Every name of a person lost to the plague increased the pitch of the calls for action. Few had an appetite to resist a shutdown. The Satmar Rebbe, Aaron Teitelbaum, was of the few who expressed ambivalence, pointing out how difficult — and futile — social distancing could prove to be in his community.

“We are unlike the gentiles,” he wrote. “By them there are families with two children or three children, with an apartment, with a room for the television, with a room for videos, entertainment.” They can social distance. We can’t. “They don’t understand at all what a Jewish family is, that a family thank God with many children,” he went on. “It’s tight in the home, there is hardly room, we set up beds wherever we can sleep. All the gentile entertainments are not here, and if we send home from the schools, there is no room in the home. They’ll go roam in the streets where we’ll again interact. So the result is that the rules are useless, it helps nothing!”

He was roundly criticized from within and without the community. The Hasidim wanted action, not insight. All anyone cared about was “And so and so too” and “How old” and “Who was he” and “Nebech!”

Many of my family members fell ill while locked down. My parents, who are in their sixties, were forced to stay inside. Many went inside, as difficult as it was. They distanced. They wore masks. They spent Passover alone. They listened to the science.

My family recovered. Many, thankfully, did. Fewer new people got ill. People breathed a sigh of relief.

And the truth Teitelbaum pointed out, that a lockdown is the anathema to this community, began to reassert itself. How is a Hasidic family supposed to get through a beautiful spring shut inside a three-bedroom Brooklyn apartment with six kids and no visits to the many kids in apartments on the other floors? What’s left to make lockdown survivable when there is no Netflix and Zoom? Banana bread?

So out people went. One friend told me, “If you lock the doors then people come through the windows.”

They went out — and did not get sick.

Viral videos of funerals and weddings were rapaciously shared on social media. “How is this allowed?” They demanded. They called Hasidim backwards, anti-science. But they should have asked, “What are their outcomes?” You know — the scientific question.

These so called science people failed to note what the Hasidim had: that they were their own control group. That going to weddings and funerals did not result in a spike. This success should have been analyzed, studied, compared, controlled for, tested. You know, to get the science.

But there was little interest in them while they were doing well. The experts didn’t take notice.

But Hasidim did. Maybe not consciously, but people realize when their experiences contradict expertise. If Hasidim came away feeling “meh” about masks and such, then the onus was on the medical community to explain why a summer went by without any problems.

Now in September, there is an uptick, so the experts are back. The government doesn’t hesitate to pronounce non-compliance as the fault. But we were non compliant all summer, Mr. Mayor, and no uptick. Where were you then?

No one bothered to check. Instead, Mayor DeBlasio is threatening a local lockdown because several Haredi communities have positive rates that are five percent, compared to the City’s two percent. But how many Haredim are sick with this positive rate? What was the positive rate all summer? None of the scientists can tell us.

It’s a numbers game with no meaning. And the community is playing. They issued a call to residents for a September 30 test drive: “we implore those who feel 100 percent healthy and well to come and take a test and save the situation.” What situation are they worried about? Not the virus. The leaders are frank: “You can save the schools and synagogues and Jewish incomes.”

It was response the government deserved. This kabuki theatre is not science.