The government is feeding a Hasidic persecution complex 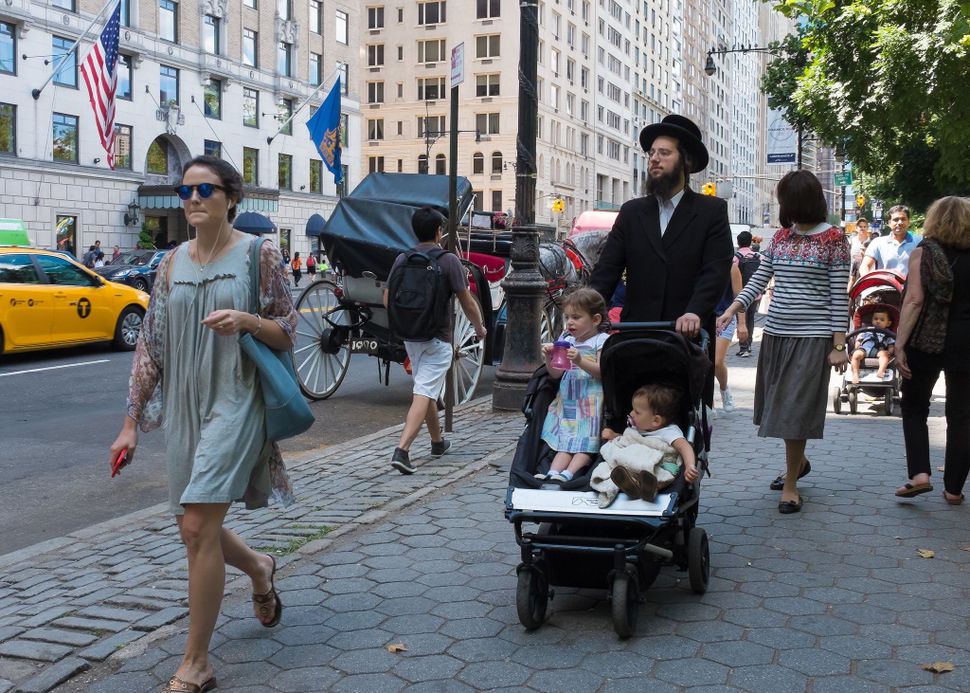 If you are a Hasidic child, you would learn of the doctrine of eternal anti-Semitism no matter how uneventful your life is. Image by Getty Images

Imagine you are a Hasidic teenage boy, a yeshiva student. You usually have school all year round, six days a week; your purpose in life is to study Torah, especially before your arranged marriage at the age of 18 or 19 while you are not yet distracted by family and work. From the time you are young, you are taught that all time not spent studying is bittul z’man, a waste of time. Men in your life study on the train, on the bus, in the waiting room, before work, after work, on Shabbos after a nap. It is unimaginable to you to spend weeks and months outside the study hall.

Suddenly, cities begin calling for the closure of study halls because a contagious virus is spreading. Your Yiddish newspapers and local Hatzalah exhort you to comply with health officials. All institutions close as the death toll starts to mount.

For the first time since you can remember, you are at home during the day, a surreal experience. Weeks and weeks go by, the number of cases goes down, and nerves begin to settle. But the governmental decree to stay home continues. Rebbes with whom you had phone study sessions organize to meet in small groups. On the down-low in basements, private dining rooms, synagogues which are locked but you get in from the side door. More parents send their sons back, and bigger institutions quietly open.

You attend yeshiva again, but everyone is now looking over their shoulders, worried about “getting caught.” Getting caught gets you into the news, it makes you look bad, and this is a great fear.

Then one day there is a rumble and a crew of intimidating police officers barges into the study hall. You scramble to put on a mask, more to dissipate judgment from gentiles than infection from the virus, and you can see that your peers are pale and shaken.

You all follow orders and disperse. Outside, some goyish reporters are flashing pictures of you. It’s terrifying.

To the secular world reading about it in the news, this is a story about a community that considers itself above the law. But to the Hasidic community experiencing it, it’s a story in which they are being forcefully prevented from practicing their religion. And though the circumstance of a global pandemic is a rare one, Hasidim are experiencing it in the context of a familiar story: the eternal persecution of the Jewish people.

Many who have observed the persecution complex prevalent among Hasidim think it’s about the Holocaust. Sticking it to Hitler, overcoming trauma, and trying to repopulate the souls lost are frequently given as motivations. But the Hasidic persecution complex is much larger than the Holocaust. It’s rooted in the belief that Jews have a long history of being persecuted, physically and spiritually. Hannah Arendt described it in “The Origins of Totalitarianism” as “the doctrine of eternal anti-Semitism” wherein Jews or non-Jews believe that Jew-hatred is a normal and natural reaction to which history gives only more or less opportunity. In other words, it’s the eternal fate of the Jew to be persecuted.

I grew up in the Satmar Hasidic community, and the many stories of my childhood focused on the persecution of Jews: Egyptian slavery, the Spanish Inquisition, the expulsion of Jews from nations, pogroms and anti-Jewish decrees, the blood libels and the kidnapping of Jewish children by Christian neighbors to forcefully convert them, Czarist Russia’s many edicts, and of course, the Holocaust. The most popular children’s books were the series “Der Tzeylung fin Tzadikim,” Stories of the Sages, which recounted life in the shtetl and its travails. There were a hundred or so of these thin books with short, illustrated stories on the theme, always with the sage or the poor Jewish innkeeper achieving a happy ending through religious triumph.

On Passover nights, my Holocaust-survivor grandfather used to gather the little ones among the white pillows of his big Passover chair and describe how the Egyptians buried babies in bricks in lieu of cement, among other Egyptian atrocities. And the following day, during the long, sticky hours when we ate lemons dunked in heaps of sugar, he sat on the porch shmoozed with the adults about what we called “the milchoma,” — the war. Stories of hunger, fear, lost loved ones, miracles, times that he and a friend had come within a hair’s width from death.

I was a child and didn’t pay much attention to adult affairs, but I have snippets of memories that are imprinted in my mind as if I had seen these scenes: Here Zeidy is running, here he has frost-bite, here he is carrying a friend, here a Nazi is shooting, here the neighbor fell and is gone, here Zeidy is alive, thank God.

Hasidim love to tell stories, and the drama inherent in the Holocaust made for many great ones. The stories weren’t even necessarily depressing because, like all good Hasidic tales, they had a happy ending where Jewish religious life prevailed, despite — despite! — risk to life and limb. The Jews in the ghetto clung to their Torah scrolls, their menorahs, their kosher, their Yom Kippur. And like all good stories, they were tales of overcoming the most extreme adversity — in this case, the persecution of Jews because they were Jews.

It also created a great conflict when after the war, Hasidim migrated to America. The Yankee-land which was once known as the place where you lost the beard, kerchief and Yiddish, was by the 1940s and 1950s, hospitable to multiculturalism and sympathetic to Holocaust survivors. To Hasidim, it felt like a miracle. America was dubbed the malchus-shel-chesed — a kingdom of kindness.

But even as Hasidim celebrate America, their historical perspective nurses the fear that the good times could end on a whim. It’s this that drives their political savvy in politics, the close ties with officials like New York City’s Mayor Bill de Blasio. These relationships are the result of tireless efforts meant to protect the community. And indeed, there has been persecution in America still, like the uptick of assaults against Jews, most from Hasidim; like the tragic shooting and knife attack just months ago.

But then there is the other kind of persecution America excels at, the spiritual kind like the government trying to prohibit the circumcision ritual that can spread herpes, or activists trying to enforce education standards for boys. During one round of education fights, Williamsburg zealots hung posters on lampposts with images of smoking vats and intimidating locks on schools; the message is clear: It’s persecution deja vu.

And the coronavirus pandemic is bound to become another episode to cement this complex.

When lockdowns began in March, the Hasidic community for the most part took the orders seriously. The Yiddish newspapers declared that saving lives was most crucial. The oldest, Der Yid, urged the community to abide by the guidelines, to save lives, to not bring undue embarrassment to the community. While people didn’t comply on every level, the disruption to this extremely communal community was enormous.

But then weeks went by. Scores of men attended a funeral, and it brought on the ire of neighbors, the mayor and the media. More and more Hasidim got tired of the disruption, and they tried to mingle while keeping it on the down-low. Statistics released by New York City last week showed that the Orthodox communities do not have among the highest death rate per capita; things have been improving for a while. 2,000 people attended a funeral weeks ago, but the predicted surge just… never came.

And neither did a recalibration of the lockdown. The government continued to decree no school, no Shavuous, and the closure of many businesses.

Among my Hasidic friends and family, attitudes shifted. What began as “My uncle died, it’s terrifying” became “Shhh, if they find us, the goyim will turn their hate on us.”

Every Hasidic child learns the doctrine of eternal anti-Semitism no matter how uneventful their life is. They believe the narrative because it’s the mythology. But it would be just a story.

When police come and break down doors, traumatizing children for studying Torah, when these children end up involuntarily on the front page of major news outlets for the “sin” of studying Torah, the persecution narrative might seem like more than a narrative. Indeed, perhaps, this time, it would be true.

The government is feeding a Hasidic persecution complex