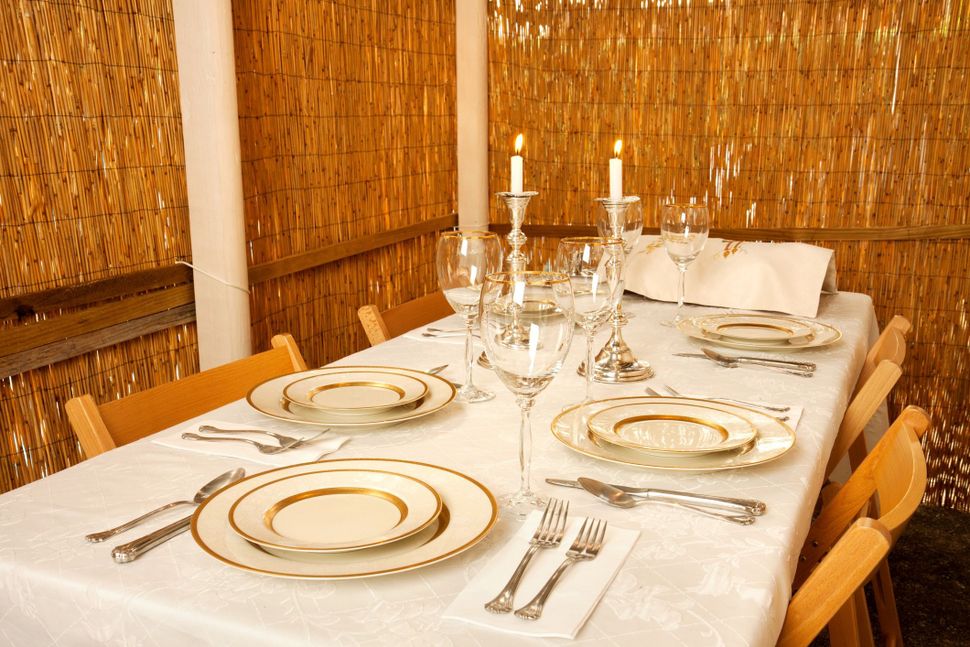 A set table in a sukkah Image by iStock

A sukkah is something of a paradox.

It’s a symbol of safety. In prayer, the word is literally translated as shelter — often, a shelter of God’s peace, spread over the supplicant.

Yet its occupants are also not supposed to feel too safe. The roof of a sukkah must be sparse enough to see the stars, and it must be a temporary structure. In this way, it’s a reminder of the fragility of life, and the human need to rely on the Almighty.

Indeed, a sukkah usually has such an airy feel that Orthodox Jews thinking about sitting in one during a pandemic might have reasonably thought that it would be safer than sitting in synagogue. But they would have been wrong.

Now, as the Orthodox begin building the sukkahs for the Sukkot holiday, which starts Friday night, health officials, doctors and rabbis are rushing to disabuse them of that notion — especially because of COVID-19 cases are spiking in those very communities. The result is a conflict between desire to fulfill a religious obligation, and fear of the virus. Many leaders are responding with creative tweaks — and calls for increased caution.

On Tuesday, Rabbi Daniel Korobkin, of Thornhill, Canada, publicly disinvited out-of-town guests from coming to his community in a Facebook post. “If you were planning on coming to Thornhill for Sukkos, please don’t,” he wrote. “The risk of infecting your family and friends is too great right now. Make arrangements for a Sukkah and Yom Tov where you are.”

According to Jewish law, or halacha, the commandment of sukkah is fulfilled by drinking wine and eating bread — and saying the appropriate blessings — beneath a sukkah’s roof.

Yet according to the New York State Department of Health, people eating in a sukkah must “social distance” — maintain a distance of six feet from each other. The DOH also recommends that sukkahs maximize air flow, and that synagogues offer staggered times for families to bring their own meals or partake of “self-served individually wrapped food and drink.”

Many American synagogues across denominations are doing something along these lines: opening their communal sukkahs for staggered visits, available with advance registration by individual households — like Reform congregation of Shir Hadash of Los Gatos, Calif. and the Jewish Center of Long Beach, also in California.

“We are treating the sukkah as an extension of an indoor space,” said Rabbi Benny Berlin of the Jewish Center.

The Rabbinical Council of America has disseminated a ruling from Rabbi Hershel Schachter that exempts observant Jews from the obligation of sukkah if they are concerned about contracting the virus and only have access to a big communal sukkah. “It is a case of safek sakanah,” the memo explained, meaning “potential for danger.” (This is in line with other legal rulings that have created COVID-era leniencies — such as permitting hand-washing for Yom Kippur.)

The Orthodox Union, which like the DOH recommends social distancing in sukkahs, also said in an interview that it will release more safety guidelines on Wednesday — “especially important during the uptick we are seeing in many of our communities,” said Rabbi Adir Posy, of the OU.

“Everything we’re doing, with the rising numbers, is erring on the side of caution and vigilance,” said Rabbi Efrem Goldberg, of Boca Raton Synagogue in Florida. “We’re trying to distinguish between the essential and non-essential, so we can celebrate many more Sukkos to come.”

Young people are another pressing concern. Communities are looking for creative ways to make the holiday fun for them. In Baltimore, at Orthodox Congregation Ner Tamid, “the sukkah hop” — a beloved activity when children go from sukkah to sukkah gathering treats — is being reimagined as a “socially distanced scavenger hunt,” where individual families will have timed slots to visit other family sukkahs and will receive enclosed candy bags to take home.

Instead of having the children visit to decorate the sukkah, they distributed craft bags with sand art projects and coloring projects.

“The smiles on the faces of the children and their parents were heartwarming,” she said.

And at OU-JLIC of the State University of New York at Binghamton, Rabbi Isaac and Tal Attia are assisting students in building their own mini-sukkahs — made out of string for maximum airflow — for students near their dormitories.

A student volunteered to design the prototype, using basic materials from Home Depot, while a nearby farm donated branches for the students’ sukkah roofs, called schach. The couple delivered the materials and helped guide the students through the building process.

But perhaps the greatest challenge of fulfilling the mitzvah of sukkah is most pronounced in urban communities — where a scarce few members have outdoor spaces for private sukkahs, and where synagogue members have historically relied on communal sukkahs in order to fulfill the mitzvah.

At Kehillah Jeshurun in Manhattan, the synagogue has a sukkah with two and a half walls — the minimum amount allowed by Jewish law — to allow for air flow. “There will be no catered meals,” said Rabbi Chaim Steinmetz, the senior rabbi. “But we will give people small challahs to eat a token meal in the sukkah.”

Yet in cities, some are worried about unmasking, even briefly, just to break bread — while others plan to stay home, and feel guilty for doing so.

“It’s a rabbi’s role to give comfort to those who cannot perform mitzvot due to the danger now,” said one Manhattan-based Orthodox rabbi who spoke on condition of anonymity, out of fear of compromising his position. “Many of us are waiting for a green light from poskim (scholars of Jewish law) to tell our community members to stay home if it’s unsafe.”

October 1, 2:00 p.m.: This article has been updated to reflect the news that a leading Jewish legal authority has issued a ruling on the commandment of sukkah.