A candidate abused women. Why did lefty journalists defend him? 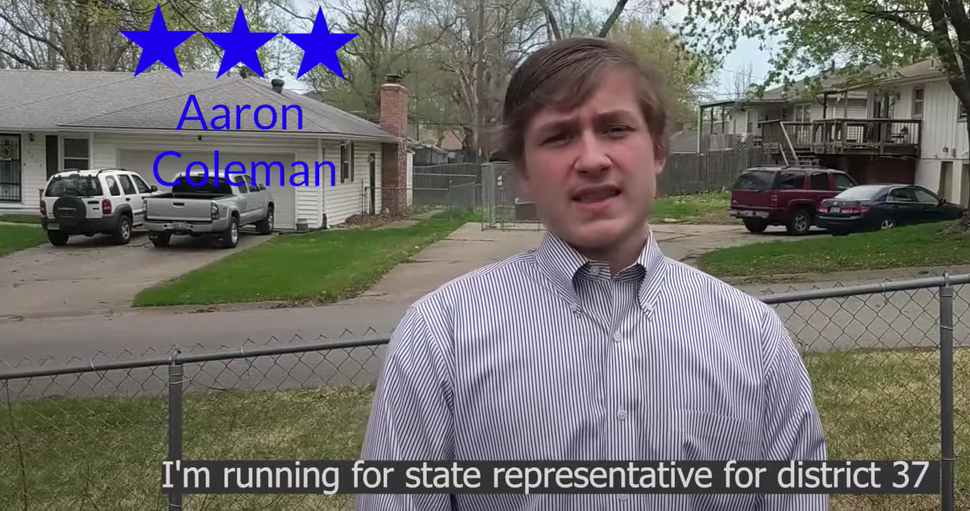 A recent political story out of Kansas pitted progressive, socialist values against the treatment of women in a way that revealed that for all too many, women are not a central part of their progressivism.

The story centers on Aaron Coleman, a 20-year-old Jewish student who became the Democratic nominee for a state House seat in Kansas. On August 4, Coleman defeated an incumbent Democrat in a blue Kansas district to advance to the general election, where he will run unopposed.

His victory was met with cheers on the left, where he was heralded by many as an anti-establishment progressive due to his support for issues like Medicare for All and the Green New Deal. His working class life as a dishwasher who defeated a long-term incumbent also appealed to many who see many Democrats as too corporate and distanced from working class issues.

And then, Coleman’s disturbing history of abuse towards women began to trickle out.

It turns out that from the time he was 12, Coleman has been abusive towards women in rather horrifying ways, in episode after episode that Coleman does not deny. In one early incident, he obtained nude photos of a girl he knew, and tried to use them to blackmail her to send more. When she refused, Coleman sent the nudes to everyone she knew. Coleman also admitted to calling a girl fat and telling her to kill herself — something she later attempted to do.

Coleman issued a blanket apology for mistakes made in high school. He then announced he was going to drop out of the race, only to become defensive and take it back a few days later. “I obviously did not expect to have my entire personal life, especially what I did in middle school, put under that kind of national microscope,” he said in a statement.

For many women, these allegations and Coleman’s continued candidacy were horrifying, indicative of a deep-seated misogyny that should disqualify someone for public office.

Unfortunately, many on the left didn’t join in to condemn Coleman at this stage. Instead, leftist journalists like Glenn Greenwald came to Coleman’s defense. Greenwald wrote a long profile of Coleman in the Intercept, where he praised Coleman as holding political beliefs unheard of in Kansas and dismissed his “serious misconduct from middle school when he was 12 and 13 years old” as the actions of a young troubled boy.

Aaron Coleman, the 19-year-old progressive who won his Kansas primary, speaks about his troubled past and promising present.

Watch the 30-minute video with the controversial, unconventional candidate.https://t.co/6gVzlTS4o1

Ryan Grim, another Intercept reporter, and the writer Thomas Chatterton Williams similarly tweeted in support of Coleman in August. “We simply cannot have a digitized society in which even what you do as a 12 year old is held against you in perpetuity,” wrote Williams.

“Wait, he did this stuff when he was 12? And we’re just done with him forever?” wrote Grim.

Wait, he did this stuff when he was 12? And we’re just done with him forever? https://t.co/BI40NBQvd3

These comments were amplified by others who mocked and put down feminist voices speaking out about Coleman’s past. The point they were making was that the personal is political, an important feminist slogan for a reason: Too often misogyny and domestic abuse are treated as interpersonal flaws instead of public safety concerns, or disqualifications for political office.

We simply cannot have a digitized society in which even what you do as a 12 year old is held against you in perpetuity. How are so many unable to see how horrific and intolerant the world they’re rushing to create really is? https://t.co/EO3xuy9uy0

It did not surprise those same feminists when Coleman’s initial defense — that he was a troubled middle schooler who had learned from his mistakes — began to fall apart with new allegations. In late August, Coleman’s ex-girlfriend told the Intercept he had slapped her and chocked her within the past year. She shared text messages in which he admitted to slapping her, and threatened to kill her if she ever became pregnant. This happened in December of 2019 — less than a year before the primary.

Another woman, pro-choice activist Megan McQuinn, said Coleman pressured her to come out against his political opponent and harassed her when she told him no.

Finally, earlier this week, it came out that in 2015, Coleman was arrested for threatening to shoot a female student at a local high school; he was charged with a felony but plead guilty to a misdemeanor charge of harassment.

The Kansas Democratic Party has distanced itself from Coleman after these stories came out, and is backing a write in campaign for the incumbent, Stan Frownfelter. But while Ryan Grim was the first journalist to publish the accusations from Coleman’s ex-girlfriend, neither he nor Greenwald have publicly apologized for defending him initially.

And Coleman himself continues to portray his misogyny as the misdeeds of a child, accusing the Republican and Democrat parties of engaging in class warfare. “I find it insane to use someone’s juvenile record to distract from the fact Republicans and Democrats are engaging in full on class warfare right here in Wyandotte County and keeping people trapped in poverty in order to maximize profits,” he told The Kansas City Star.

It’s a line he learned from the leftist journalists.

Needless to say, we can demand a candidate who supports both working class issues and women’s issues, and who hasn’t himself engaged in consistently abusing women.

Domestic violence and harassment of women should be enough on their own to disqualify a man from the “progressive” banner in politics. Aaron Coleman is just one example of how many white leftists who claim progressivism are quick to dismiss harm to women. The work of women activists is ignored and the threat of violent misogyny is downplayed.

Feminists know that the personal is political because we know that there is no liberation for women and marginalized groups if we are unsafe in our own homes. What good is it for a politician to support reproductive rights on paper if he doesn’t treat women as equal human beings?

Coleman is not fit for office, and the lefty journalists who defended him owe us an apology — and a commitment to do better.

Mia Brett is a PhD candidate in American Legal History and a cofounder of the All Women’s Progress Think Tank. She lives in Brooklyn with her dog Tchotchke. Follow her on Twitter @QueenMab87.

A candidate abused women. Why did lefty journalists defend him?