Facebook has banned Holocaust denial. But what about other genocides? 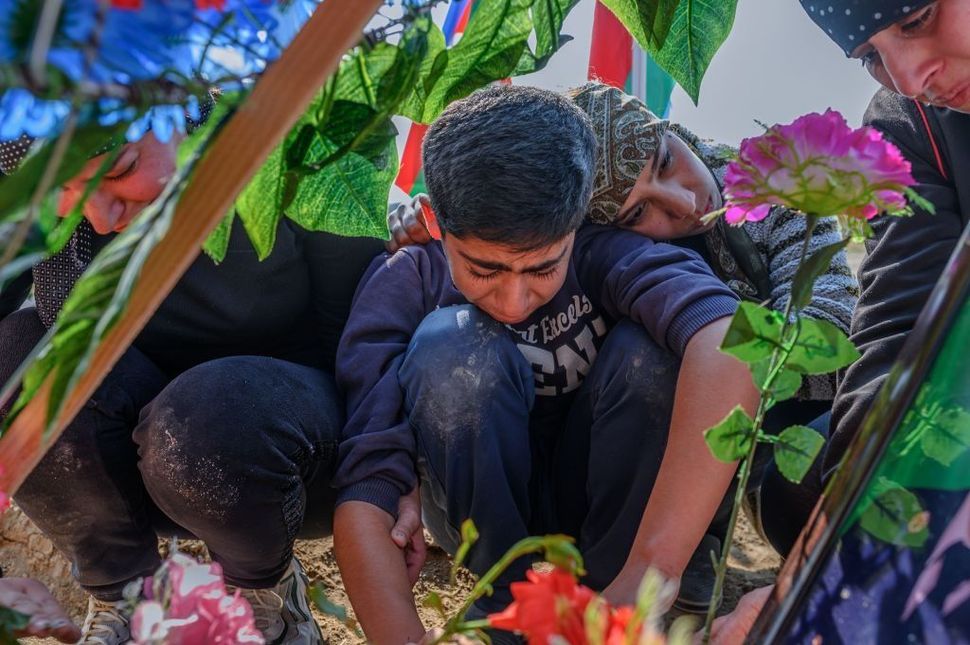 Family members of a 29-years-old soldier killed during clashes with Armenia, grieve as the crouch next to his grave, near Agdam city during the military conflict over the breakaway region of Nagorno-Karabakh on October 15, 2020. - The origins of a flareup in fighting over Nagorno-Karabakh that has now killed hundreds and threatens to involve regional powers Turkey and Russia are hotly contested and difficult to independently verify. Both sides accuse the other of striking first on September 27 over the ethnic Armenian region of Azerbaijan. (Photo by Bulent Kilic / AFP) Image by BULENT KILIC/AFP via Getty Images

Facebook announced a major policy change to its posting guidelines this week to ban content that “denies or distorts” the Holocaust. Mark Zuckerberg, Facebook’s founder, who in 2018 had said Holocaust denial was “nothing more than things that different people get wrong,” explained the move by saying his “own thinking has evolved as I’ve seen data showing an increase in antisemitic violence.” In particular, Zuckerberg cited disturbing recent survey data showing that more than 1 in 10 Americans under the age of 40 believe Jews caused the Holocaust, and that fully a quarter believe the Holocaust was a myth. Facebook’s policy change was instantly applauded by Jewish organizations such as the Anti-Defamation League, the American Jewish Congress, and the Simon Wiesenthal Center.

These organizations are half-right to praise Facebook for its decision to finally ban Holocaust denial on its platform. Facebook’s decision is a long-overdue reckoning with the unfathomable amount of misinformation that has sprouted on the platform in recent years, a major reason why fully half of millennial and Generation Z adults between the ages of 18 and 39 report regularly seeing Holocaust denial content on their social media feeds.

But the move means little so long as Facebook maintains its current policy of allowing the denial of other historical or current genocides, and the American Jewish community must continue its pressure on Facebook until that, too, is banned.

The role of Facebook in promoting genocide and political violence is well-documented, and is not simply a matter of proper historical memory, but of very real violence inflicted against vulnerable minority communities today. Facebook itself has admitted that members of the military of Myanmar used a systematic campaign of posting on its platform to spread genocidal hatred against its Rohingya Muslim minority.

As The New York Times reported, “The military exploited Facebook’s wide reach in Myanmar, where it is so broadly used that many of the country’s 18 million internet users confuse the Silicon Valley social media platform with the internet. Human rights groups blame the anti-Rohingya propaganda for inciting murders, rapes and the largest forced human migration in recent history.” According to Thet Swe Win, a human rights and pro-democracy activist in Myanmar, “The military has gotten a lot of benefit from Facebook.”

Or consider the case of the Armenian genocide of 1914 to 1923, during which the Ottoman Turks systematically murdered and deported up to 1.5 million Armenians, and which the Turkish government has continued to deny ever happened.

In fact, denial of the Armenian genocide remains the official position of most countries on earth: only 30 have passed resolutions that acknowledge the overwhelming consensus among historians that what happened to the Armenian people a century ago constitutes a clear example of the planned, systematic genocide of a minority community. And Israel is conspicuously absent among those 30 nations.

Denial of the Armenian genocide is not a mere matter of historical debate, but a very real and live conflict with real implications for the lives and safety of the Armenian people today. Recently, a long-dormant conflict between Azerbaijan and Armenia over the mountainous border territory of Nagorno-Karabakh, a territory claimed by both nations, has erupted into a hot war with live military fighting, beginning with Azerbaijan attacking Armenian civilian targets in the region.

And Turkey, a regional power, is exacerbating the situation by directly intervening to support Azerbaijan, providing military support ranging from sending Syrian fighters working for a Turkish security firm to supplying weapons and training to the Azerbaijani military. Armenians have reported feeling scared that Turkey could go so far as to “perpetrate a genocide of Armenians for the second time.”

The Turkish government’s denial of the Armenian genocide should be especially historically resonant for Jews, given the historical relationship between this genocide and the Holocaust, which came 20 years later. As historian Stefan Ihrig has documented, the pro-Ottoman policy of World War I-era Germany, and Germany’s attempt to protect its Ottoman allies, was one factor that helped lay the groundwork for the genocidal anti-Semitism of the Third Reich.

“The Armenians had made an appearance in many of the central texts of German antisemitism and racialist worldview for decades,” he wrote. “The perception of Jews and Armenians as similar, equal, or even identical had a long tradition by the time World War I had ended.”

And Raphael Lemkin, the Polish Jewish lawyer first responsible for coining the word “genocide,” argued that the world’s indifference to the Ottoman genocide of the Armenians directly emboldened Hitler to pursue the Final Solution.

Just a week before the German invasion of Poland in 1939, Hitler is said to have given a speech to his Wehrmacht commanders in which he defended his plan by asking the chilling rhetorical question: “Who speaks today of the annihilation of the Armenians?”

Unfortunately, far too many Jews have forgotten about our shared history with the Armenian people. Israel has chosen for geopolitical reasons to actively involve itself on the Azerbaijani and Turkish side of the conflict, selling billions of dollars in weapons to Azerbaijan.

A member of Armenia’s dwindling 2,000-year-old Jewish community named Rachel told Israeli newspaper Haaretz this week of the emotional pain that this caused her as an Armenian and a Jew. “It was the start of Yom Kippur when the war broke out,” she said. “I didn’t know if I could face going to synagogue, because I knew Israel was providing weapons to Azerbaijan and they were killing people. It was chaos inside of me.”

Rachel, who said she could not give her last name for fear of her safety, likens the memory of the Holocaust to the memory of the Armenian genocide, saying, “Maybe we think that 6 million people lost in the Shoah outweigh 1.5 million Armenians lost in 1915. But the end was the same, the impact was the same: the near-annihilation of a people.” Nor will she let non-Israeli Jews off the hook: “What has shocked me most is the silence of the Jewish Diaspora,” she said. “Jews around the world who should be speaking up, not only the Israelis.”

Rachel is entirely right. We must be silent no longer. Denial of the Armenian genocide was one contributing factor that emboldened Germany to think it could get away with genocide against the Jews. The histories of our communities are linked and we should see the fight against the denial of the genocides of our peoples as interlinked, as well.

And if we want Facebook and other media platforms like it to ban Holocaust denial, as we should, then we need to stand up and demand that they ban denials of other genocides, just as loudly.

Facebook has banned Holocaust denial. But what about other genocides?