Despite Armenia’s emotional appeals, American and Israeli interests are with Azerbaijan 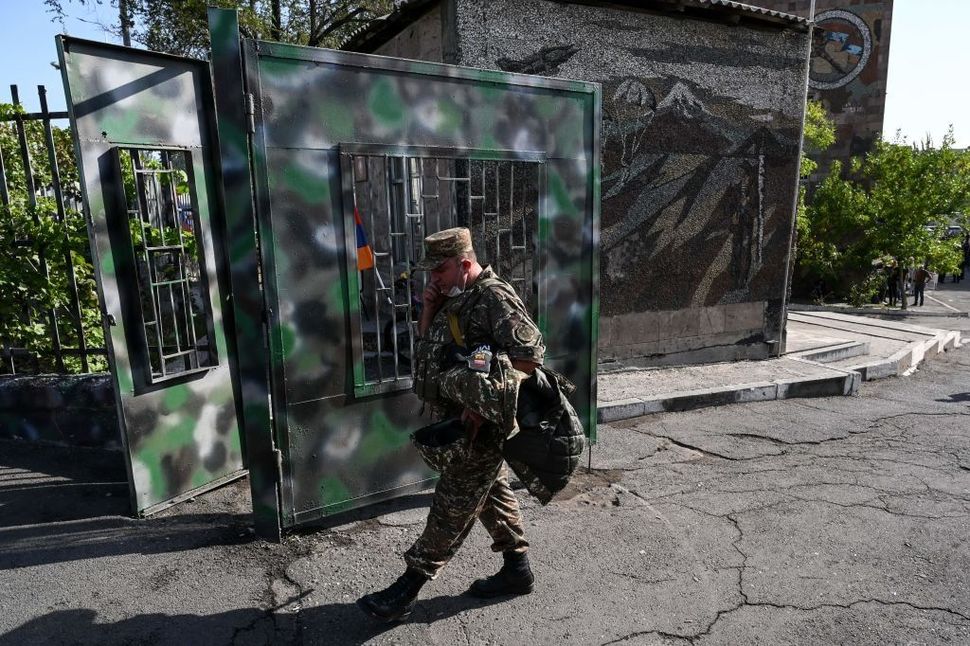 A man wearing a military uniform walks in front of a military commissariat in Yerevan on September 30, 2020. - Armenian Prime Minister Nikol Pashinyan on September 30 said peace talks with Azerbaijan under Russian mediation would be inappropriate, as fighting over the breakaway Nagorny Karabakh region entered a fourth day.(Photo by -/AFP via Getty Images) Image by Getty Images

For another take on how Jews should engage with the Armenia-Azerbaijan conflict, click here.

The ceasefire announced Friday in Moscow between Armenia and Azerbaijan is already coming under considerable stress. But even if it holds up, it is hard to see this long-frozen conflict over the Nagorno-Karabakh region going back into hibernation.

An assertive Turkey, which long provided mostly symbolic and rhetorical support for Azerbaijan, is now providing more direct forms of assistance including arms, mercenaries, and possibly even jet fighters. This is encouraging Azerbaijan to use military force to wrest back control of Nagorno-Karabakh, an Armenian enclave within its internationally recognized borders.

Neither Armenia nor Azerbaijan borders Israel or any country with an influential Jewish population. Yet the Jewish state and the history of Jewish persecution are inevitably instrumentalized by both sides: Armenians invoke their own 20th-centry experience with genocide to garner sympathy with Jews, and Azerbaijan reminds the world that it was the rare majority-Muslim country to recognize Israel after the fall of the Soviet Union.

Amb. Suleymanov: the same “propaganda” tactics that have been used against Israel are now being used against Azerbaijan

Baku has since drawn rather close to Jerusalem, which is now its top arms supplier. Armenia’s supporters, meanwhile, by appealing to American Jews, may be trying to peel off support for Azerbaijan in Washington.

It is a clash between emotional symbolism and foreign policy realism.

For all the powerful historical allusions Jews may see in the Armenia struggle, the United States and Israel can do very little to help without paying a steep diplomatic price. Pivoting toward Armenia would harm relations with the more strategically valuable Azerbaijan as well damage the principle of territorial integrity in a region where it is already at substantial risk from Russian adventurism.

The Republic of Artsakh, the governing authority in the area, is not recognized as legitimate by any state, including Armenia and Russia, having been established by the force of arms in the 1991-1994 Nagorno-Karabkh War. This does not mean the world should endorse Turkish-encouraged hawkishness on the part of Azerbaijan; on the contrary, a sturdy ceasefire and continued negotiations through the Minsk Process must be a top priority.

Still, there is no use pretending Armenia can achieve a reliable peace while effectively holding the territory of a neighboring state. That leaves the 150,000 mostly Armenian residents of Nagorno-Karabakh in a most unfortunate plight: the best they can hope for is a return to the “cold peace” that prevailed from 1994 until 2016, but even that is unlikely with increased Azerbaijani confidence and Turkish backing.

Israel takes no firm position on the Nagorno-Karabakh conflict, but Azerbaijan’s strong ties to the Jewish state’s defense and arms industries are conspicuous enough for outsiders to draw their own conclusions. Though hardly high profile, Azerbaijan occupies a place of appreciable importance for the foreign policies of the United Statesand Israel.

The country is strategically located, bordering Russia, Georgia and Iran. For Israel, having an ally right next door to its arch foe is not something to cavalierly put at risk. And its role in Azerbaijan’s impressive military build-up since the country lost control of Nagorno-Karabakh is conspicuous.

Israel also has ties with Armenia, but they are less extensive, and now under strain. Armenia recalled its ambassador to Israel Oct. 1 after evidence emerged of Israeli-made drones being deployed by Azerbaijan in the conflict.

American interests are similarly lopsided in favor of Azerbaijan. Although Congress passed a law in 1992, amid strong Armenian-American lobbying, that severely restricts U.S. assistance to Azerbaijan while it remains in conflict, it was American diplomatic leadership that secured the contract that, according to the Office of the US Trade Representative, “is responsible for about 75% of Azerbaijan’s current oil production.”

When the full picture of U.S.-Azerbaijan relations are considered, the sensible position for Washington to take on Nagorno-Karabakh looks very much like the status quo: Say all the right things about a ceasefire and a multilateral mediation process, but do not risk our good ties with Azerbaijan for the self-determination of some 150,000 people in Nagorno-Karabakh. The same is true for Israel. Whatever short term measures either country takes to encourage calm and counteract the bellicose influence of Turkey, they will eventually revert back to their previous relationships with Azerbaijan.

Defending American and Israeli ties to Azerbaijan does not, however, require whitewashing the miserable human rights record of its president, Ilham Aliyev. The fact that comparatively free and democratic Armenia, a country that has gone through hell and back, is Aliyev’s adversary makes the case for a strategic rethink even more resonant.

But for an American foreign policy that will increasingly take on the character of a great-power competition, Azerbaijan’s strategic location between Europe and Asia and history of support for U.S. objectives are indispensable. For Israel, the threat from Iran will predominate for years to come and Azerbaijan simply has much more to offer than Armenia.

The Armenians in Nagorno-Karabakh are a proud and besieged people fighting a just cause. It is a testament to the endurance of amoral calculations in international affairs that neither the leader of the free world nor the state that emerged from the ashes of genocide can do a whole lot to help them.

Perhaps it was Henry Kissinger, whose family narrowly escaped Germany just before Kristallnacht, who described the operations of our world best: “The most fundamental problem of politics is not the control of wickedness but the limitation of righteousness.”

Despite Armenia’s emotional appeals, American and Israeli interests are with Azerbaijan