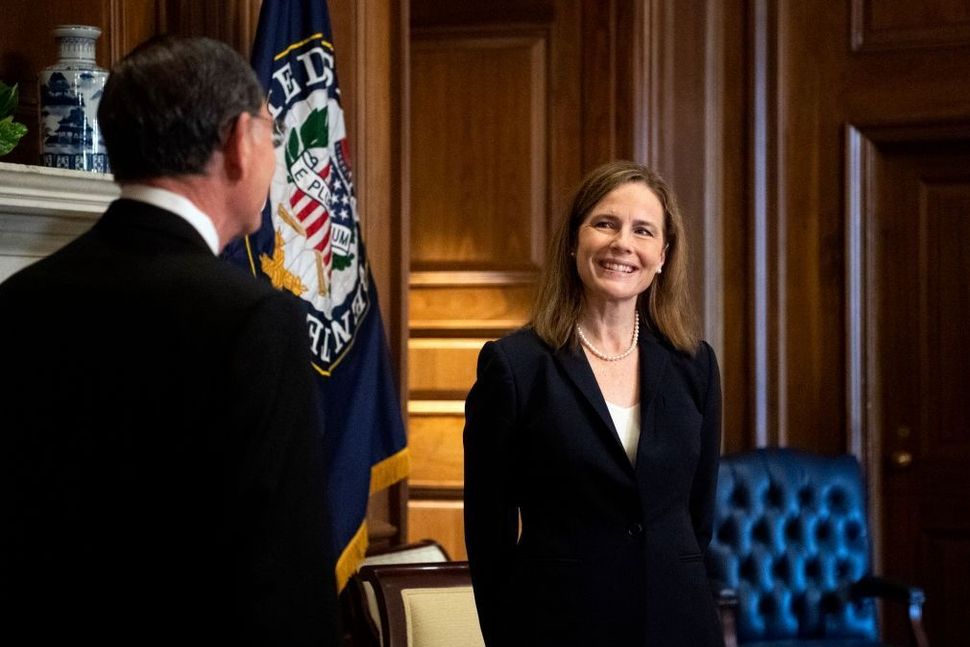 During the course of her confirmation hearing for the Supreme Court seat left open by Justice Ruth Bader Ginsburg’s death, Amy Coney Barrett was often asked about her judicial philosophy, which she summed up over and over as “Originalism.” It’s a view of the law which was favored by Judge Barrett’s mentor, Supreme Court Justice Antonin Scalia, which says that the correct interpretation of the law is the interpretation which would have been intended at the time the law was written. Originalists believe that their way of interpreting the law is the only way to protect the sacred nature of America’s founding document.

But Coney Barrett, and the Republicans who confirmed her Monday night, have a thing or two they could learn from the rabbis of the Talmud, who were equally if not more concerned with preserving the sacred nature of the Torah.

Unlike the Originalists, the Talmudic rabbis understood that the divine comes into the world through the tradition of sacred interpretation. For the Talmudists, there was no original text — not in the sense that Coney Barrett believes the Constitution to be. They understood that a text is sanctified through time only because we read it, because we bring it into our world, be it through study in the case of the Torah, or through court rulings, performances, and our interpretations in the case of the Constitution, or a Shakespeare play.

Works are not intrinsically sacred but become so through their histories, and the attention we give to them. This is the lesson of the Talmud.

And it is apt here. For Americans and for all those who continue to be inspired by the vision of the Founding Fathers, the legacy of the Constitution is both alive and sacred. Ironically, those who claim to want to preserve its sacred character through Originalism are in fact turning modern democracy’s foundational work into an antiquarian curiosity.

As any smart undergraduate knows, the idea of an original work found in its pristine purity is a fantasy. This is no irresponsible license for postmodernism or relativism, nor is it the belief that “anything goes.” Rather, this call for a Talmudic view of the Constitution rests on the rabbis’ view of themselves as charged with the preservation of the most sacred text to exist, the Torah; they realized that it was in the process of preserving it that they made it sacred.

When the ritual life of the Jewish people was destroyed with the Temple, Rabbi Yochanan ben Zakkai, smuggled out of a besieged Jerusalem in a coffin, led the process which canonized the Hebrew scriptures: Song of Songs and Ecclesiastes, for example, were in, while the Book of Maccabees was out. But what really happened was Yochanan ben Zakkai got out of his coffin and brought Judaism back to life; in choosing what would count as sacred, the rabbis created Judaism; in interpreting those works, they made Judaism live. They gave Judaism a future.

Moreover, when the rabbis affirmed the divine nature of the oral law, they were smashing the idea of Originalism, the very idea that a text has a single, literal meaning. It’s true that there are a few ultra-Orthodox literalists today who teach the children that the Talmud was given word-for-word on Mount Sinai. But in denying the historical process of the oral law, they turn a living tradition into a dead one. An originalist view of interpretation removes human freedom from the world, which both the Constitution and the Torah celebrate.

Believing in interpretation does not mean that the author is dead, as most of my professors at Columbia insisted, and many English professors today just assume. For the rabbis, it was precisely the quest for intention that drove the interpretation of Scriptures; the “author” of the Torah was for them a living God, and the generational mesorah — the Hebrew word for tradition that means the activity of passing on — is an interpretive one, with later generations striving to understand earlier ones.

In interpreting the Divine, the rabbis committed to understanding the author’s intention, asking the question, “What does the author mean?” But they relied on their own insights as the answer. That they come up with different answers, in different times and different places, does not undermine the sacred nature of the tradition; it affirms it.

The rabbis of the Talmud understood what polemicists on the right reject as the “subjective” aspect of interpretation. The noted legal scholar of the 16th century, Rabbi Solomon Luria, writes that everyone reads according to their capacities, and that readings reflect the unique character of individual souls. Only the inspired reader understands the inspired work.

There is no objective reading, but a purely subjective reading is not worth our attention. Sacred works — Shakespeare, the Constitution, and the Torah — come to life and reveal their meanings by thriving in our communities, through reading and interpretation. The sacred does not inhere in a work, but becomes present through the activity of reading.

This is not a concession to relativism but the acknowledgement of the human participation in the creation of the sacred.

Today, with the confirmation of Amy Coney Barrett, the world is turned upside-down. In the name of Originalism and preserving the sacred nature of the Constitution upheld by right-wing fundamentalists, the activities of reading and interpretation — the very acts which bring the Constitution to life and make America great and a modern light to the nations — are being cast aside.

We must remind ourselves that belief in sacred books is idolatrous, and that only the belief in living traditions — whether religious, literary, or political — can be redemptive.

William Kolbrener writes about English literature, Jewish philosophy and contemporary anti-Semitism. His 2016 book, “The Last Rabbi: Joseph Soloveitchik and Talmudic Tradition” was published by Indiana UP. His newest book, “Literature and the Sacred: God and Reading in the Time of COVID-19,” is forthcoming.