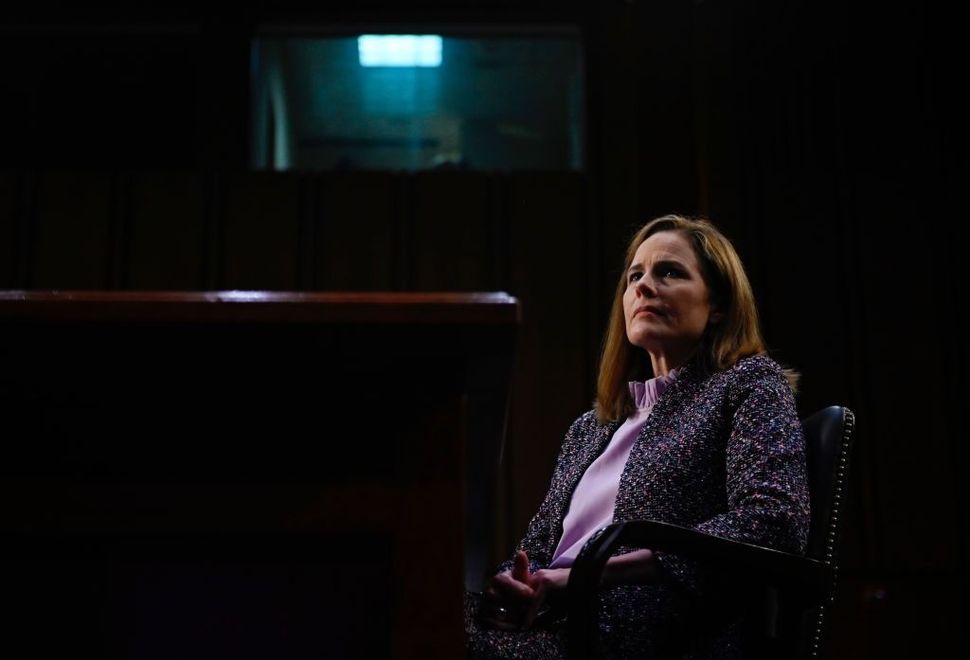 Supreme Court nominee Judge Amy Coney Barrett testifies before the Senate Judiciary Committee on the third day of her confirmation hearing on Capitol Hill on October 14, 2020 in Washington, DC. Image by Getty Images

When does life actually begin? Some conservatives — Supreme Court Justice candidate Amy Coney Barett among them — believe that it begins at fertilization. That poses a potential challenge not only to abortion advocates, but to the one in eight American couples suffering infertility — and many Jewish organizations and fertility advocates are concerned about Coney Barrett’s stance on IVF (in vitro fertilization).

In 2006, Barrett signed a letter urging the overturning of Roe vs Wade: “We the following citizens of Michiana oppose abortion on demand and support the right to life from fertilization to a natural death.” She has not addressed personhood in the Senate confirmation hearings this week. When Sen. Diane Feinstein asked Coney Barrett about her views, the jurist declined to comment. “My policy views, my moral convictions, my religious beliefs do not bear on how I decide cases nor should they,” she responded.

The phrase “from fertilization” concerns IVF advocates and fertility experts because it infers support of “personhood” legislation, laws that would “define human life as beginning at the moment an egg is fertilized,” according to RESOLVE, The National Infertility Association, which urged the Senate Judiciary Committee to question Ms. Barrett on her beliefs about embryo personhood and IVF. Personhood laws grants embryos full legal protection under the U.S. Constitution, including the right to life from the moment of fertilization; many Personhood organizations call embryos “pre-born” children. RESOLVE, which advocates for patients, “staunchly opposes personhood because it would, by its very logic, restrict IVF and other medical treatments that enable people to build families.”

To be more specific, Amy Coney Barrett refused to answer whether IVF was “manslaughter.”

One in three Americans have either used some kind of fertility treatment or know someone who has. https://t.co/hfcoDgDKKe

During in vitro fertilization, multiple embryos are created in a laboratory to increase the chance for infertile couples to have a baby. If an embryo indeed has rights, it cannot be tested for genetic abnormalities, discarded, or, essentially, created in the first place. (It also presents problems in custody cases.)

“I don’t think people get it: access to abortion is only one part of reproductive justice,” said Rabbi Idit Solomon, founder and CEO of Hasidah, an organization that provides financial assistance to Jewish families seeking infertility treatment. “I think people are missing the connection between IVF and abortion law; people like Amy Coney Barrett view it through a Catholic lens: If you define life as beginning with conception – which has no grounding in Judaism — IVF becomes almost impossible.”

Fertility experts nationwide are sounding the alarms around Barrett’s support of personhood legislation. ‘Fertility and Sterility,’ a journal that has never commented on the seating of a U.S. Supreme Court Justice, released an unusual editorial on Sunday, expressing the editors’ “distress” over Barrett’s views. In addition to restricting or overturning abortion, her seating “threatens those who seek to build a family through in-vitro fertilization.”

“Is Amy Coney Barrett the beginning of the end for IVF?” asked Ellen Trachman, an attorney specializing in reproductive technology law, in the pages of Above the Law, a legal online journal. “Most concerning to assisted reproductive technology attorneys like myself is the potential that a Justice Barrett, on the Supreme Court, might someday have occasion to rule that embryos are entitled to the same constitutional rights as people who have been, like, born.”

Personhood legislation is “one of the most dangerous political movements in America,” according to Dr. Brian Levine, founding partner and director of the Colorado Center for Reproductive Medicine’s New York location. “Giving rights to embryos will inevitably limit how people use them.”

The world’s religions have different positions about when life begins – and therefore whether fertility treatment is permitted. The Catholic Church forbids IVF; Muslims generally allow it (with restrictions on how the man’s sperm is obtained); and most Jewish deciders – across denominations, including the ultra-Orthodox – permit, and even encourage fertility treatment. In the Orthodox community, millions of dollars are routinely raised to assist in the financial costs of treatment for families who need it.

In Israel, the world’s fifth IVF baby was born, in 1982, and the country offers free treatment for women up to age 45 for their first two children with their current husband. “Whether due to the Biblical commandment to ‘be fruitful and multiply’ or the traumas of the Holocaust and perennial wars, reproduction has been a central goal in Israel, some would say a pre-occupation, since its foundation,” wrote University of Haifa’s Professor Daphna Birenbaum-Carmeli in a 2016 study.

“The Jewish community is extraordinarily supportive of IVF to build Jewish families, regardless of the denomination or affiliation,” said Dr. Batsheva Maslow, a reproductive endocrinologist and director of research at Extend Fertility in New York City, and medical director for Nishmat’s Yo’etzet Halacha program. This support has “real-world” legal implications, she said, posing questions like what should people do with their leftover embryos? Or what happens if the power goes out in an embryo lab on Shabbat? (For the record, a Jew is not allowed to violate the Sabbath in order to save the embryos.)

“Fertility treatment would be significantly affected by the change in personhood laws in this country,” Dr. Maslow said. The Talmud states “that an embryo is considered to be halachically equivalent to water (fluid) for the first forty days after conception,” according to Puah, a religious organization that often rules on Jewish law and fertility treatment.

While there are differing opinions in the Jewish community on abortion — at what point in a pregnancy it is allowed, if the mental state of the mother is a factor, etc — rabbis of all denominations agree that an embryo is not deemed alive.

“That’s not the Jewish approach,” said Rabbi Elan Segelman, rabbinic advisor for the Orthodox organization Puah. “Halacha recognizes life upon implantation,” he said about Jewish law regarding pregnancy beginning at the stage when the embryo attaches itself to the uterine lining.

Dr. Maslow said that implantation is the “earliest” stage recognized in halacha as “pregnant,” with others ruling that the Talmud’s 40 days is more applicable. (Interestingly, 40 days is often when one can hear a heartbeat.)

Judaism does not conflate its stance on IVF with abortion, although other religions might.

“The reality in the United States is that personhood and abortion rights are very much intertwined politically and culturally,” Dr. Maslow said.

Many Jews who have experienced infertility have gone on to form advocacy organizations, advocating for awareness and communal support.

“As a fertility warrior whose family would not exist today without the advent of modern science, and as an advocate on behalf of other fertility warriors, the value of bringing life into this world is far greater than denying the possibility of their existence,” said Gila Muskin Block, executive director of Yesh Tivka. “Fertility treatments are the manifestation of men and women willing to go to the ends of the world physically, financially and emotionally to bring more children into being.”

People need help starting families because of the “disease” of infertility or because of their biology, says Andrea Syrtash, founder of Pregnantish, a media site devoted to infertility. “I cannot understand how anyone would block people from building their families with the help of science. These people are bringing children into the world who are so so wanted. “

Amy Klein is the author of The Trying Game: Get Through Fertility Treatment and Get Pregnant Without Losing Your Mind.