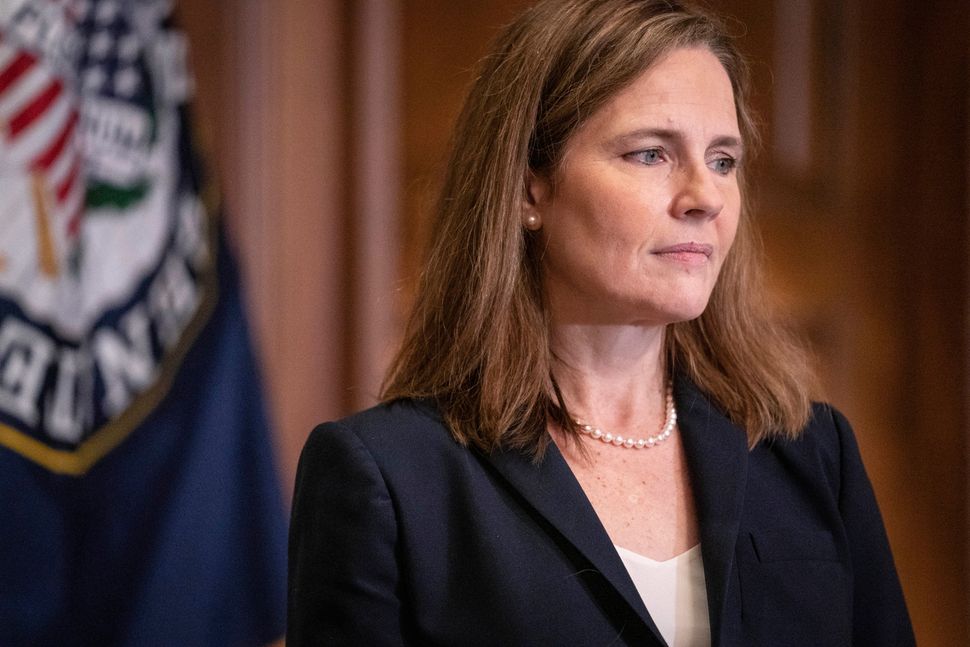 On Monday night the Senate will wrap up the confirmation of Judge Amy Coney Barrett, who will be voted in to replace Justice Ruth Bader Ginsburg on the Supreme Court. It’s a good time to pause and recognize something astonishing about the confirmation proceedings: For a time as politically riven as ours, Judge Barrett’s confirmation process just wasn’t that contentious. The contrast with Justice Kavanaugh yelling at the Committee, righteously indignant, was a stark reminder for how things could have gone.

The credit for the sanguine tone of the proceedings belongs to Barrett herself, from whom a no-nonsense, no-drama vibe emanated throughout. It set the tone for the entire process.

It also seemed vaguely familiar to me. Though I have never met Barrett, there was something there I could not quite put my finger on. But watching her confirmation hearings, I knew I’d met people like her. Then I got a text from a friend: “She reminds me of my aunt.”

And that was it.

If you live in a community like mine, Amy Coney Barrett will seem familiar to you, too. It’s not just that Haredi families with seven or more children are par for the course. It’s that she has that unique vibe that a woman with seven children has, the necessary bandwidth for raising seven (or more) unique human beings with individual needs and challenges, who has no choice but to just get it done.

That’s what I saw in Judge Barrett’s hearings, days spent answering questions without so much as a scribble on the notepad in front of her, as she treated Senators’ childish showmanship like a walk in the park. I imagined her dealing with a child, maybe on a day when a daughter or son needs to vent about something that’s not going their way. It’s no doubt something Coney Barrett has plenty of experience with.

What I saw in Coney Barrett that felt so familiar were the same qualities I admire in my own wife — qualities I know that I, as a man, do not possess.

That’s what we Haredi Jews believe: that God gives us the unique talents we need to handle our unique mission that He entrusts us with. And that’s what I saw in the difference between Coney Barrett’s and Kavanaugh’s hearings. I saw a man who didn’t have those natural tools. And I saw a woman who reminded me of the women in my community whom God has blessed with the ability to take on anything.

Many people from outside my community, or any community which still assigns value to traditional gender roles, especially when it comes to raising a family, write this off as some sort of second-class status. But it’s far from it. It’s the highest admiration.

We all understand that when someone is better at something than others, we try to free them up to focus on that. You don’t see many companies requiring their executives to answer the phones or fill orders. That would be a gross misappropriation of resources. For that very reason, Rabbi Moshe Feinstein wrote in a 1976 letter to another rabbi that women are exempted from some of the halakhic requirements and mitzvahs men have: Because God created a natural ability in mothers — one which runs through all of nature — to better raise their children. “None of this is to say that they are somehow ‘less’ than men are,” Rabbi Feinstein goes on. “It is merely a leniency God gave to them,” because they are naturally best at “the work which is most important to God.”

That’s right: most important. From our point of view, insisting that women be treated exactly the same as men in order to express our respect for them betrays a kind of contempt — for women, womanhood, and motherhood.

The connection between women and motherhood is one that our tradition has deep respect for. The very word for women, “Nashim” in Hebrew, is derived from the word “Noshe” — creditor — for they are entrusted with what is most important: motherhood. But it goes beyond that, really. “Whenever we were lost and cast down,” our tradition teaches, “in the merit of the women Israel was found worthy of redemption.” That is one massive debt.

My Rabbi, who recently lost his mother, explained this thought in the eulogy he delivered at her funeral. He emotionally described how his mother more than anyone else molded him into the leader he is today.

I see this sort of thing with my own children. While they certainly (usually) want to hear what I have to say, when they have a problem, their instinctive first stop is always, without fail, my wife. “A woman of valor” is the ultimate praise bestowed on a woman in our tradition, because women — especially mothers — are nothing if not the most valiant people ever created.

This is what I saw in the Coney Barrett hearings: a woman whose family holds her in the high esteem that our community holds for mothers. A woman who leads her family with strength and intelligence, who is her family’s first stop when something goes wrong.

Maybe I’m projecting. But in my experience, no man can lead his children like their mother can. Because women — especially mothers of large families like Amy Coney Barrett — are just created differently.