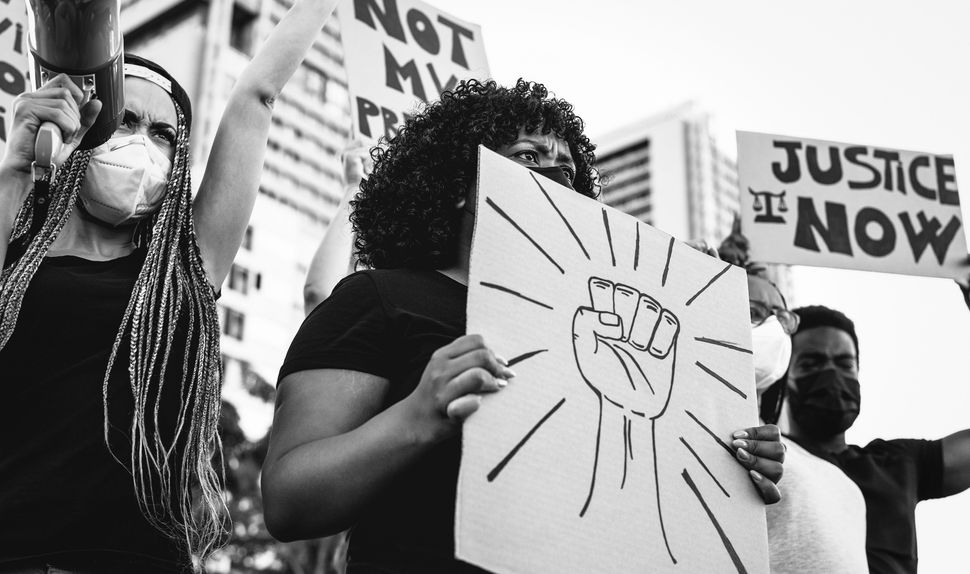 Critical Race Theory has become the latest misunderstood academic bogeyman in politics. From Donald Trump to Senator Josh Hawley to Jewish publications across the nation, everyone seems to think that the greatest threat facing our nation is a rather obscure academic discipline that examines systemic racial inequality in America.

It’s no surprise that conservative politicians want to paint anything addressing the impact of racism as somehow “evil” or divisive. Unfortunately, the deliberate demonizing and misconstruing of an important academic methodology is affecting the general public’s view of this work and driving a wedge between marginalized groups like Black and Jewish Americans. “We live in a world in which everyone is being told to side either with the ‘racists’ or the ‘anti-racists’” wrote the writer Bari Weiss in Tablet Magazine recently. “Jews who refuse to erase what makes us different will increasingly be defined as racists, often with the help of other Jews desperate to be accepted by the cool kids.”

First, let’s clear up a few misconceptions about what Critical Race Theory actually is. The political discussion usually conflates a bunch of different academic disciplines, including Whiteness Studies, Critical Theory, and Critical Race Theory. If you’re not an academic, the distinctions between these disciplines might seem silly. But if we’re going to politicize academic discussions, it’s important to understand what we’re politicizing.

The language of “white privilege” or “white skin privilege,” for example, comes out of Whiteness Studies, though the concepts do also underpin much of Critical Theory.

Critical Theory is an approach to understanding social problems and power structures. Critical Race Theory is a framework that is built on Critical Theory, but acts within disciplines like sociology and law to understand how systemic structures perpetuate discriminatory impacts against marginalized groups. Critical Race Theory uses case law and evidence of discrimination, such as economic status, incarceration rates, and medical outcomes to examine the effects of systemic structures.

And if you believe there is racism in the United States that is perpetuated by our legal structures, you probably agree with Critical Race Theory.

As Derrick Bell explained in his seminal 1995 lecture at University of Illinois School of Law, “Who’s Afraid of Critical Race Theory?” CRT is “disruptive because its commitment to anti-racism goes well beyond civil rights, integration, affirmative action, and other liberal measures.” Bell said this in 1995 — and 25 years later, we know that a deeper commitment to anti-racism is needed to address racial inequality in the United States.

The mainstream political conversation now acknowledges that policies that aren’t explicitly racist can result in discrimination. This is known as a discriminatory impact — the adverse effect on a group of people from a neutral law. Consider the mandatory minimum sentencing disparities between cocaine and crack, which have been used as a clear example of racial bias in the criminal justice system. Another striking example of a discriminatory impact is the racial disparities in maternal mortality numbers in the United States. Black women across incomes are dying at three to four times the rate of non-Hispanic white women without an explicitly discriminatory related law. These examples and so many more prove the existence of systemic racism and the discriminatory impact of laws.

So what does all this mean for American Jews?

For starters — and perhaps most importantly — the American Jewish community includes many Black Jewish people and Jewish people of color. Far too often in racial conversations, we assume “Jewish” means white skinned.

But even beyond the insight offered to the Jews of color in our community, the reality is that Critical Race Theory and anti-racism policies are good for the Jewish community writ large.

To a people like the Jews, for whom racial designations are always an awkward fit, Critical Race Theory offers the insight that race is not a Black/white binary but instead a socially constructed tool for inclusion and exclusion.

Moreover, Whiteness Studies as a discipline explicitly includes Jews in the analysis of the ways that race is constructed in the United States. Books like “Whiteness of a Different Color” by Matthew Frye Jacobson and “The Price of Whiteness” by Eric Goldstein both acknowledge the exclusion of Jewish immigrants from the dominant white culture for most of American History.

Recall that in Charlottesville, Virginia the white supremacist marchers carried both swastikas and Confederate Flags. Fighting white supremacy is urgent for the Jewish community and Critical Race Theory is an important tool in that fight.

In my personal academic work, I use Critical Race Theory to discuss legal discrimination against Jews in the United States. Jews were subject to implicit legal discrimination that denied them a fair trial in criminal court and perpetuated narratives of “innate criminality” about the Jewish community.

While not explicitly part of Critical Race Theory, in her article, “Enforcement of the Sunday Closing Laws on the Lower East Side, 1882-1903,” Batya Miller uses a similar methodological approach to discuss how Sunday Laws — laws that prosecuted people (especially Jews) for working on Sundays — caused discrimination against Jews in New York City. And Jewish legal scholar, Britt Tevis, builds on scholarship on discrimination against Black Americans in places of public accommodation to show how Jews were also subject to similar forms of exclusion.

Despite the usefulness of CRT to Jews, there are people, both Jewish and not, misrepresenting Critical Race Theory and anti-racism policies as somehow anti-Jewish. Nothing could be further from the truth. Rather than a tool to oppress Jews, CRT is a critical tool in fighting white supremacy — the gravest threat we face.

Relearning anti-racism with new language and methods is always scary for people who believe they are on the right side of history. But fear of making a mistake or being called racist is not enough of a reason for Jews to distance themselves from work that will help the Jewish community and all marginalized groups.

Dr. Mia Brett holds a PhD in American Legal History. She is a cofounder of the All Women’s Progress Think Tank. She lives in Brooklyn with her dog Tchotchke. Follow her on Twitter @QueenMab87.