The ADL cannot have it both ways with Muslims 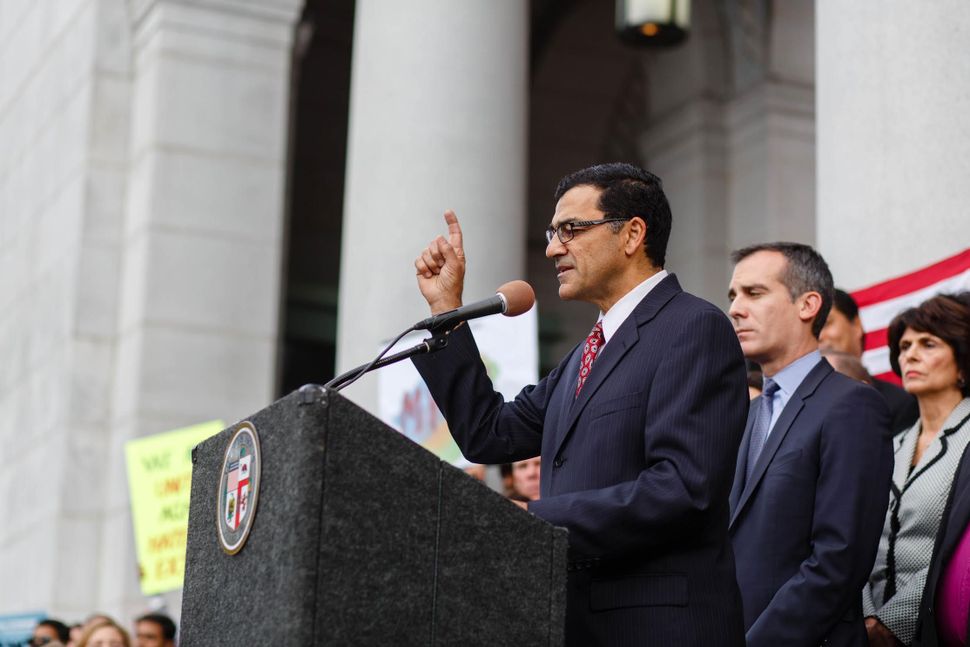 Editor’s note: Hours after this article was published, its author was disinvited from the panel discussion. The organizer and moderator of the event, David Lehrer, said this was because he was afraid the issues raised in the OpEd might distract from the conversation.

As president of the Muslim Public Affairs Council, I am headlining a panel Tuesday afternoon alongside Jonathan Greenblatt, chief executive of the Anti-Defamation League. The event is titled “After four years of bigotry and hatred — now what?” and the speakers also include the heads of the NAACP and the League of United Latin American Citizens.

I agreed to be on the panel, which was organized by Jews United for Democracy & Justice and Community Advocates Inc. (and is co-sponsored by The Forward), despite the fact that dozens of groups have, since the summer, been calling on progressives to #DropTheADL. In an open letter, the groups object to what they call the ADL’s “harmful practices,” including “a history and ongoing pattern of attacking social-justice movements led by communities of color, queer people, immigrants, Muslims, Arabs and other marginalized groups.”

This dilemma is personal for me. Over the years, the ADL has issued news releases criticizing me on its “anti-Israel activity” webpage for supporting nonviolent resistance to end the occupation, including the Boycott, Divestment and Sanctions movement. In 2013, the group listed my organization, MPAC, among the Top 10 “anti-Israel” groups in the U.S..

Yet the ADL is one of the most prominent groups in the country when it comes to countering hate and promoting civil rights. Its leaders testify at practically every hate-crime hearing at local, state and federal levels. Many in law enforcement and the U.S. Congress view the ADL as the go-to organization on civil-rights issues.

American Muslims want to work with natural allies on issues of shared concern. But we also need to defend ourselves and our core values. This requires a moment of honesty and introspection.

Our organizations actively condemn acts of violence wrongfully committed in the name of Islam, including terrorism against Israelis. But I have yet to see the ADL condemn any act of violence against Palestinians committed by the State of Israel. The group has not condemned the Israeli occupation, which dehumanizes Palestinians on a daily basis. Its leaders have not condemned Israeli military killings of innocent civilians (instead, there is this “fact sheet” offering responses to claims of Israeli use of excessive force). And they have not condemned squalid and inhumane conditions in the open prison called the Gaza Strip.

Still, the ADL made news supporting our community after President Trump signed the executive order for a travel ban primarily targeting Muslims. When there was talk of the Trump administration setting up a Muslim registry in the United States, Greenblatt — a former Obama administration official who took the helm of the ADL in 2015, said he would be first in line to register, in an act of civil disobedience.

The ADL seems to want to have it both ways: it sends encouragement and messages of support after a tragedy, but it also participates in singling out Muslims as part of a larger existential threat to our society. The ADL cannot claim that it’s on the forefront of defending Muslims while also being a source of anti-Muslim animus through its rhetoric on Israel-Palestine.

Unfortunately, the ADL has a long history of contributing to anti-Muslim sentiment. In the late 1980s, I was contacted by a law-enforcement official and informed that I was the target of ADL surveillance of pro-Palestinian groups and individuals in the U.S. The so-called “ADL Spy Case” is referenced by Arab, Muslim and allied groups to this day as reason to avoid contact with the group.

The ADL was also among the Jewish groups that helped torpedo my nomination to a congressional commission on counterterrorism in 1999. The group did this even though I had worked with the local ADL director at the time, David Lehrer, to establish a Code of Ethics for Muslim-Jewish Dialogue that was endorsed by the City of Los Angeles Human Relations Commission. (Lehrer, now president of Community Advocates, is moderating the Tuesday’s panel with Greenblatt and I.)

I decided to participate in the panel because I hope to articulate the concerns of the voiceless to my co-panelists and the audience. Since the discussion revolves around what we need to do after Trump, the first order of business is truth and reconciliation. Then we will be better prepared to counter attacks on our communities.

The ADL, along with other pro-Israel groups, has weaponized antisemitism to marginalize those who criticize Israel — especially American Muslims — for its human-rights violations against Palestinians. By campaigning to make the pro-Palestinian Boycott, Divestment and Sanctions movement a criminal act, the ADL is not only restricting freedom of speech for American Muslims, but directly violating the human rights of Palestinians.

We call upon the ADL to stop stigmatizing those who support the legitimate demands of Palestinians for justice. We also call on the ADL to fulfill its mission as a human- and civil-rights organization by denouncing all instances of dehumanization, discrimination, and state-sponsored violence, regardless of who commits such acts.

Only then, can American Muslims feel truly welcomed to collaborate on issues that threaten us all as minorities.

Salam Al-Marayati is president of the Muslim Public Affairs Council. Follow him on Twitter @SalamAlmarayati or email [email protected]

The ADL cannot have it both ways with Muslims