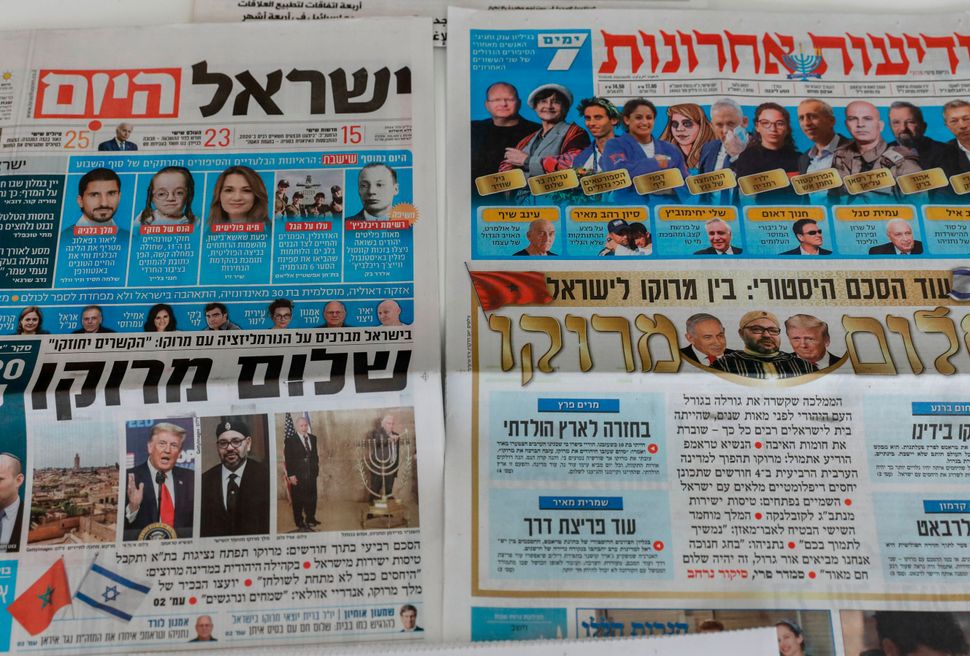 Israeli newspapers’ front page titles about the announcement that Israel is to establish diplomatic relations with Morocco. Image by AHMAD GHARABLI/Getty Images

(HAARETZ) — Morocco has won an obvious prize as a result of its agreement to normalize relations with Israel — American recognition of its sovereignty over Western Sahara. Official recognition of Israeli annexation is out, but Moroccan annexation is endorsed. The new relationship with Israel will include economic and cultural cooperation, direct flights and an exchange of diplomatic missions, but not embassies for the time being.

There have been decades of dispute over the territory between Morocco and the local Sahrawi nation, which demands independence. Outgoing President Donald Trump has again opted for a one-sided initiative that upends years of U.S. policy toward Western Sahara.

In fact, only a few weeks ago the United States supported resuming the U.N. forces mandate in Western Sahara. Now, in a move contrary to international law and the international community’s decisions, Trump has traded this precious recognition for Morocco in exchange for direct flights for Israelis, who have already been flying to Morocco freely without his help.

It’s not that previous administrations didn’t want to expand the covert peace between Morocco and Israel and bring it out of the closet. They simply didn’t want to pay the high price Trump shelled out for it without the blink of an eye. Reuters reported on Thursday evening that the United States will also sell Morocco advanced drones. Just like the agreement with Sudan, reached in exchange for removing it from the list of state sponsors of terrorism and the tiebreaker arms deals with the Gulf states, once again we see there are no free lunches. Only this time, it isn’t only the Israelis, the Palestinians and the United States who are paying a price, but another nation in the Sahara.

The chance that anyone in Israel cares about the Sahrawis’ right to self-determination is of course less than zero. The headlines will no doubt be filled in the next few days with stories of the new tourist packages available and the price for the move will be mentioned, if at all, only on the margins of these reports. But the point isn’t the Sahrawis, but the fact that Israel, a young state which was itself founded on the basis of international recognition of its right to self determination, is again joining the historic movement of those wishing to subvert and dismantle the multilateral system.

In this last minute decision to change United States policy on Western Sahara, Trump not only implemented his policy of contempt toward the international community, but added yet another act of underhanded opportunism to the list of last minute steps he has taken to sabotage and ensnare his successor, Joe Biden, in a diplomatic quagmire.

Meanwhile, U.S. officials admitted on Thursday that it was the White House who informed Defense Minister Benny Gantz and Foreign Minister Gabi Ashkenazi of the agreement. After years of mediating between Israel and various actors, Washington suddenly found itself as the go-between for the Prime Minister of Israel and his senior ministers, an odd and embarrassing novelty.

Diplomatic sources in Israel also said Thursday night that talks to reach normalization with additional countries were underway, and could reach fruition before the end of Trump’s term. According to assessments, these are Muslim nations in Asia. One can only hope that the cost-benefit ratio in these agreements will be better than the one that Washington’s “Deal Maker” has been getting so far.

This article was originally published as news analysis on Haaretz