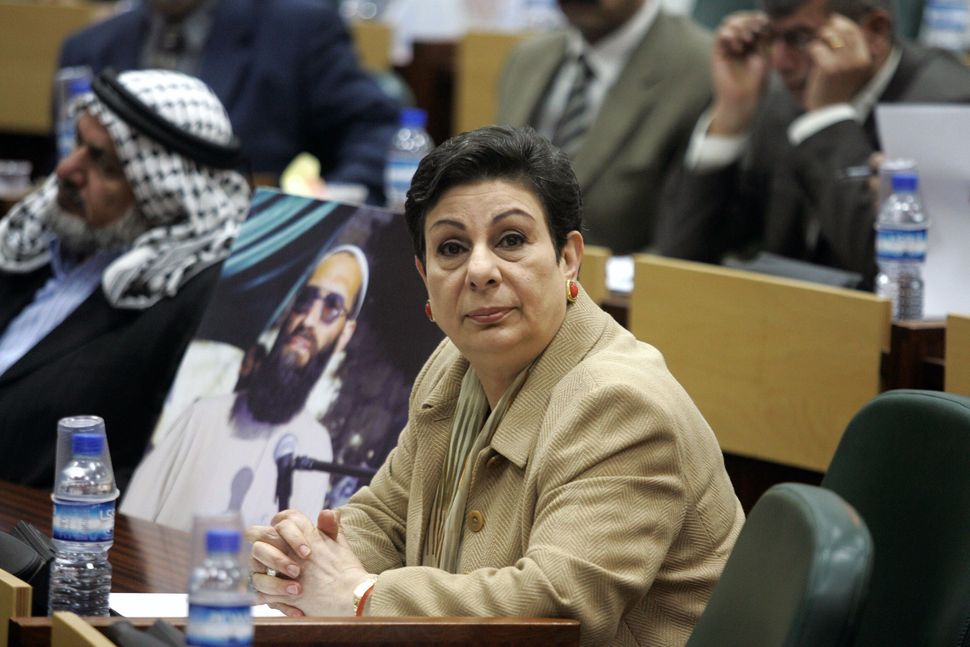 Last week, Dr. Hanan Ashrawi, an iconic Palestinian scholar, activist and feminist, and a decades-long fixture in Palestinian politics, resigned from the Palestinian Liberation Organization’s Executive Committee. The resignation of Dr. Ashrawi, the only woman on the committee, was accepted by PLO Chairman Mahmoud Abbas.

Read: Statement by @DrHananAshrawi regarding her resignation from the PLO Executive Committee and translation of her letter of resignation. pic.twitter.com/B4GvuQZkA9

Ashrawi’s resignation is gravely concerning at a time when the Palestinian struggle suffers severely from an absence of unifying and influential leadership. Ashrawi was a strong and outspoken critic of the occupation, but she was also a staunch opponent of the Palestinian Authority’s authoritarian policing practices, and was known among among Palestinians as one of the few decent members of the PLO’s leadership.

It is not only counterproductive, it’s a violation of the right to free speech. Also the cybercrime law must be reviewed & amended to be consistent with human rights law. Along with civil society activists I have worked on this & we’ll pursue it further. Issa Amro is not alone. https://t.co/GPE86RZRjJ

As head of the PLO’s Department of Public Diplomacy and Policy, Ashrawi remained distant from political divisions and controversies, and instead dedicated her energy to issues that bring Palestinians together, such as advocating for democratic reforms, including increased youth and female engagement. And she has never been implicated in corruption scandals or incitement.

Her resignation is emblematic of a decline in the decency, strength and relevance of the institution that is supposed to lead the Palestinians liberation, freedom and dignity.

As for why she’s leaving, Dr. Ashrawi didn’t hold back in her resignation letter: She openly stressed the urgent need for reforming the Palestinian political system, demanding an end to Abbas’ monopoly on leadership and decision-making.

She’s right: The PLO’s executive committee has in recent years increasingly become an echo chamber, best described as a gathering of antiquated politicians summoned to clap on command and nod their heads on cue in televised meetings chaired by President Abbas, with severe repercussions for those who dare oppose him.

But Abbas isn’t authoritarian by nature. His initial role in the PA as Prime Minister in 2003 was sanctioned and supported by the U.S.’ Bush Administration. After succeeding Yasser Arafat in 2005 to the presidency, he framed his role as a technocrat or administrative employee rather than a national leader.

And despite all, Abbas remains one of the most vocal Palestinian supporters of the peace process, as well as non-violent resistance. He is perhaps the strongest Palestinian opponent of armed resistance, and even dropped it from the PA’s platform in 2007.

But in the wake of the Hamas gaining power in Gaza in 2007, the PLO declared a state of emergency, which rendered the Hamas-controlled Palestinian parliament irrelevant, and justified the concentration power in the hands of Abbas. Without accountability or checks and balances, Abbas and his inner circle have been corrupted by power. Meanwhile, PLO officials who didn’t wish to become Abbas’ minions or who were frustrated by his decisions, like his recent decision to resume security collaboration with Israel, were either sidelined or resigned.

The Palestinian dream of statehood has turned into a nightmare, subject to an unelected rentier authority that cashes in on international aid in return for counterinsurgency and the maintenance of order in the occupied territories. This while Israel’s West Bank settlements expand unconstrained and unchallenged.

With President-elect Joe Biden soon assuming power, there’s potential for change, not just for the U.S.-Palestinian relationship but for the Palestinian political system itself.

Biden wields leverage over Abbas, including the power to resume funding the PA after the Trump administration defunded it. He can also and reopen the PLO’s office in DC. Biden should use this leverage to demand democratic reforms from Abbas, including holding general elections. In this, he would be restoring a crucial service that U.S. leaders have long neglected; the last U.S. president to push for Palestinian elections was George Bush in 2005.

Palestinian elections are necessary not only to revive a system of checks and balances, but also provide a national referendum on the future of Palestinian struggle.

That Dr. Ashrawi felt the need to resign shows how bad — and how urgent — the situation has become.