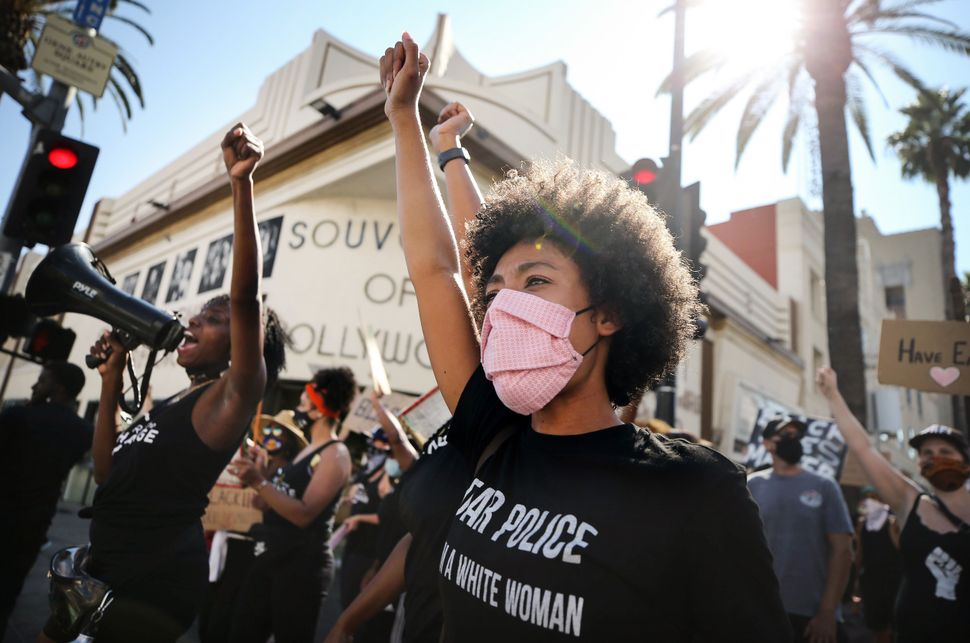 A Black Lives Matter rally in Los Angeles on August 28. Image by Getty Have American Jews “reinforced elements of white supremacy in their own lived experience?”

This question was raised by historian Marc Dollinger in the preface he wrote for a fourth printing of his book on Black-Jewish relations. The book’s publisher, Brandeis University Press, found Dollinger’s connection of “white supremacy” to Jewish-American upward mobility problematic, and their dispute over the preface, as reported in the Forward this week, triggered something of an academic brouhaha.

From where I sit, in the trenches working with Jewish groups to combat racism, Dollinger’s insistence on that particular phrase added heat to intra-communal tensions without bringing any additional light.

Let’s set aside the larger question of which members of the Jewish community identify as white, and even accept for a moment that it could be academically or philosophically justified to link the term “white supremacy” with the American Jewish experience. I would still believe this term does nothing to advance the practical cause of engaging Jews in eradicating structural racism from American life.

According to Encyclopædia Britannica, “the term white supremacist has been used to describe some groups espousing ultranationalist, racist, or fascist doctrines. White supremacist groups often have relied on violence to achieve their goals.”

But we don’t need reference books to know that the phrase “white supremacy” is sinister.

Ask any of the thousands of Jews far away from the ivory tower who are engaged in the difficult, granular work of pursuing racial justice at the grassroots level. For those of us fighting for equity in our state and local legislatures, in our synagogues, at our school-board meetings, and in our neighborhoods, the term “white supremacy” means one thing only: neo-Nazis. It conjures up images of white nationalists marching in Charlottesville, the Proud Boys, or the hateful shooters who slaughtered innocent souls at Emanuel AME Church in Charleston and at the Tree of Life Synagogue in Pittsburgh.

As President Obama recently noted, the use of inflammatory rhetoric may have media appeal and shock value, but it ultimately can dissuade many people of good will from joining a critically important cause. If Jews, especially those perceived as white, are perennially castigated and judged to be insufficiently woke when they are sincerely attempting to grapple with their own identities or privilege and engage in the pursuit of racial justice, they will give up and walk away.

If Jews feel that they are being accused of aligning in some way with white supremacists, they will lose faith in the integrity of the racial-justice movement.

And those of us in the trenches will find our daily work more difficult. Night after night, on Zoom calls nationwide, community relations professionals, clergy, synagogue social-action committees, and Jewish community members of all stripes are seeking ways to move forward in this complicated moment.

Weighed down by pandemic restrictions, fervent political polarization, and fears of increasing violence, we grapple with how to authentically engage with the struggle that has made George Floyd, Breonna Taylor, Eric Garner, Trayvon Martin and so many others household names.

For American Jews, the Dollinger-Brandeis dispute over semantics is truly an academic exercise in fiddling while Rome burns.

The bulk of American Jews have long supported core social-justice causes including civil rights, same-sex marriage and reproductive rights. They were genuinely horrified by the vicious murder of George Floyd and are eager to actively advance racial justice in our country.

Yet many of these same people have honest questions about the movements for Black Lives, defunding the police, and antisemitism and delegitimization of Israel found in progressive spaces.

The Jewish community is sensitive to the intersection of racism and antisemitism. Many American Jews also perceive a double standard in how different forms of hatred are viewed within American society. Jews are wary of our own history of persecution being negated and keenly aware of a global rise in antisemitism..

Those of us working to increase awareness of biases, entrenched structural racism, and the need for reform in the Jewish community, know that we must speak with sensitivity; we cannot afford to use language that pushes people away.

We must listen to questions and concerns without judgment if we are to achieve our goal of engaging greater numbers of Jews in the core social-justice struggles of our moment.

It is true that American Jews must undertake an honest internal discussion about the role of race, whiteness and privilege in our own lives. Many of us are doing just that, even when it makes us uncomfortable.

But that can and must be accomplished without tying our community to the very movement that targets us and that we deeply fear: white supremacy.

Guila Franklin Siegel is associate director of the Jewish Community Relations Council of Greater Washington, D.C. She can be contacted at [email protected]

Guila Franklin Siegel is associate director of the Jewish Community Relations Council of Greater Washington, D.C. She can be contacted at [email protected].