‘It was always going to end this way:’ Capitol coup is work of one man 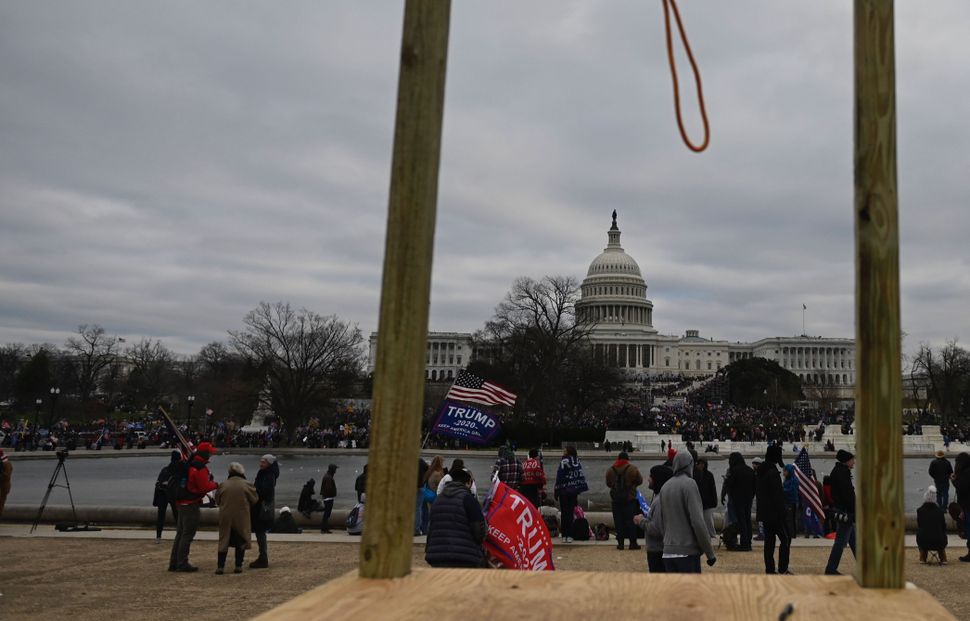 Supporters of US President Donald Trump gather on the West side of the US Capitol in Washington DC on January 6, 2021. By ANDREW CABALLERO-REYNOLDS/Getty Images

On January 6, 2021 a coup was staged in the United States of America.

Some will say that the coup began months before, when President Trump refused to accept the legitimacy of an election he lost. For a while, the coup was dressed in respectable clothes, masquerading as lawsuits and appeals and writs of certiorari to the Supreme Court. We had to humor the president, we were told.

He doesn’t like to lose, after all. He’s an unconventional guy. So what if he hasn’t conceded? Nobody ever said he was a good sport. He’s not a role model. Don’t be so naïve.

Eventually, the nice clothes stopped fitting, and the coup presented itself more brazenly. Even when the president made phone calls threatening state officials with criminal charges if they didn’t “find” him the votes to change the outcome, we were told the coup had no shot to succeed. But it gained enablers along the way, men in high places with names like Hawley, Cruz and McCarthy indulging in parliamentary sedition.

There is nothing wrong with raising questions, they told us. Let’s do another audit. Let’s get it right. What cost can there be to indulging him just a little longer, and letting off some steam?

The day of the coup started with middle-aged men on the Senate floor challenging a free and fair election. It morphed into an armed assault on the United States government. That, it turned out, was the cost of indulgence.

In the time ahead, it will be a mistake to consider the Capitol’s busted doors, breached perimeter and evacuated Congresspeople as the opening gambit in this coup. It is merely the coup made literal; the culmination of months of lies; the inevitable outcome of a full-throated attack on American democracy. Like any revolution, Trump’s has begun to consume its own.

His Party, now forever stained by the constitutional crisis it coddled into being. His Vice President, evacuated from the Senate over which he presides while the president lambasted him for faithlessness on Twitter. The country, which, over-sure of its own dignity and stability, let a wolf into the sheep pen of its democracy.

It was always going to end this way, or something like it. We trusted the job of the presidency for years to a man we shouldn’t have trusted for four minutes. Excuses were made, because the truth of his unfitness was too difficult to stare in the face. We were told his words didn’t matter: that his Twitter page, full of libels and untruths, wasn’t real life. Focus on the federal judges, the grown-ups tsked.

Now, too late, the pictures of insurrection should finally have become too difficult to ignore. We are under attack. If our televisions are mirrors — and it would be foolish to think of them otherwise — they reflect the images of our country as a failed and beserk polity.

What kind of man incites his supporters to revolution? What kind of person is willing to burn down the life of a country over the result of an election?

Someone of ineffable smallness, of unspeakable anger and hate.

Someone who smashes things carelessly, who finds that glass shatters with surprising ease.

“You’ll never take back our country with weakness,” the president opined. Where are the armed forces that deployed over the summer en masse to confront largely peaceful protests? What does law and order mean when the lawmakers are lawless?

How easy it is for a country to lose itself, but how many accomplices it takes. Lawyers who prosecute baseless cases of voter fraud. Opinion pages that draw useless equivalencies between Trump’s rampages and previous moments of partisan dispute. Senators who indulge a president; representatives who hitch their horses to his despicable wagon.

Regular people who know in their heart that Trump is an abomination, but looked the other way because of the economy, or Israel, or because the GOP is their party — right, wrong, or seditious. Voters who excused behavior in their chief executive they never would in their children, friends or partner.

This is a year during which much of what we had felt was solid underwent a sudden sea change. Our political climate has proven just as prone to contagious viruses as our immune systems. The project of making America great has made us a banana republic. By going Trump, we went crazy. By wanting to disrupt the status quo, we humored a man who cared not a whit for us.

We were betrayed, American flags were pulled down, and Trump flags raised. The MAGA metaphor became the MAGA mob. Woe to a country that elevated such a man, and curses on all those who propped him up.

Those who bent the knee will bear this guilt. And those who rode the tiger are now squarely in its bloodthirsty sight.

‘It was always going to end this way:’ Capitol coup is work of one man