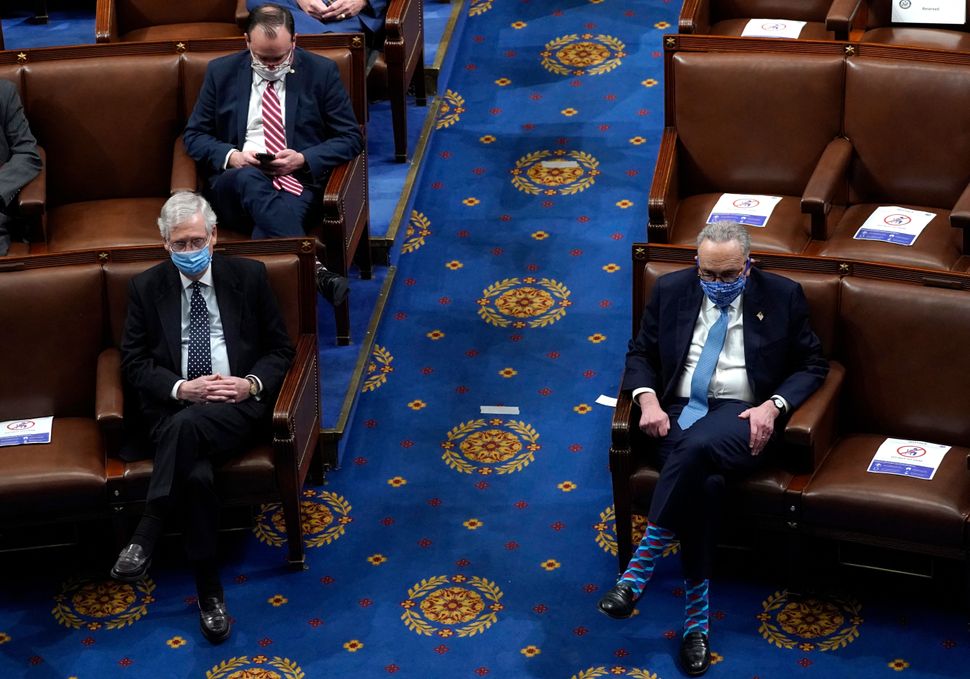 On Wednesday, Jon Ossoff and Raphael Warnock of Georgia were sworn in to the U.S. Senate, making Chuck Schumer of New York the body’s first Jewish Majority Leader.

Schumer will need every single caucusing Democratic Senator — including, with Ossoff, a minyan of Democratic Jews — to support him in enacting President Biden’s ambitious vision. The Senate is now split 50-50, with Vice President Kamala Harris set to serve as the tie-breaking vote. Senate Democrats may hold the narrowest of majorities, but they represent over 41 million more Americans than their Republican counterparts.

Standing in the way of progress is the Senate’s antiquated filibuster rule, which requires 60 votes to end debate on an issue, meaning in practice that the votes of 60 Senators are needed to get accomplish almost anything. In order to get needed work done for the American people, the Senate must abolish it.

It would be the Jewish thing to do.

With the filibuster, much of the agenda that President Biden and Vice President Harris campaigned on in 2020 will remain beyond reach. In the balance hang voting rights, gun background checks, campaign finance reform, statehood for Washington, D.C. and Puerto Rico, union rights, police reform and scores of other priorities.

Schumer, if he can advance legislation addressing those many pressing issues, will become one of the Senate’s most consequential Majority Leaders. He knows full well that can happen only without the filibuster; when asked about abolishing the outdated tradition, he has said that “everything is on the table.”

Minority Leader Mitch McConnell has a history of abusing the filibuster, obstructing the Senate’s business and promising to be a “grim reaper” for the Democratic agenda. There’s a wealth of evidence he’ll follow through on that promise. When Democrats controlled both the House and the Senate in the first two years of the Obama Administration, Republicans at the behest of McConnell, then as now Senate minority leader, nearly doubled the previous record of filibusters.

Allowing that needless stalemate to continue — one with no basis in the Constitution — is counter to the goals of democracy. And fighting for democracy in the Senate is the most important thing Schumer could do to uphold Jewish values.

Respect for majority rule has long roots in Jewish tradition. The Torah teaches, “You shall not follow the majority to do evil” — in other words, as our Talmudic Sages interpreted, one must follow the majority for good. In the famed story of Achnai’s oven, the Rabbis teach that Jewish law ought to follow the will of the scholarly majority, even if we hear a heavenly voice in the minority.

The Mishnah teaches that God created humanity from one person so that none can say that their rights are greater than another’s. The idea of one person, one vote is a Jewish idea.

Because of the 18th century compromise that led to the creation of the Senate, 41 Senators have the power to govern the body’s decision-making, allowing a remarkable minority of the population the power to block legislation. The filibuster lets Senators representing as little as 11% of the nation’s people veto the will of those representing the rest.

The Torah teaches, “﻿Justice, justice shall you pursue.” Unless progressives abolish the filibuster, it will continue to stand in the way of the Senate under Chuck Schumer fulfilling that mandate.