The fight against QAnon in government is only just beginning 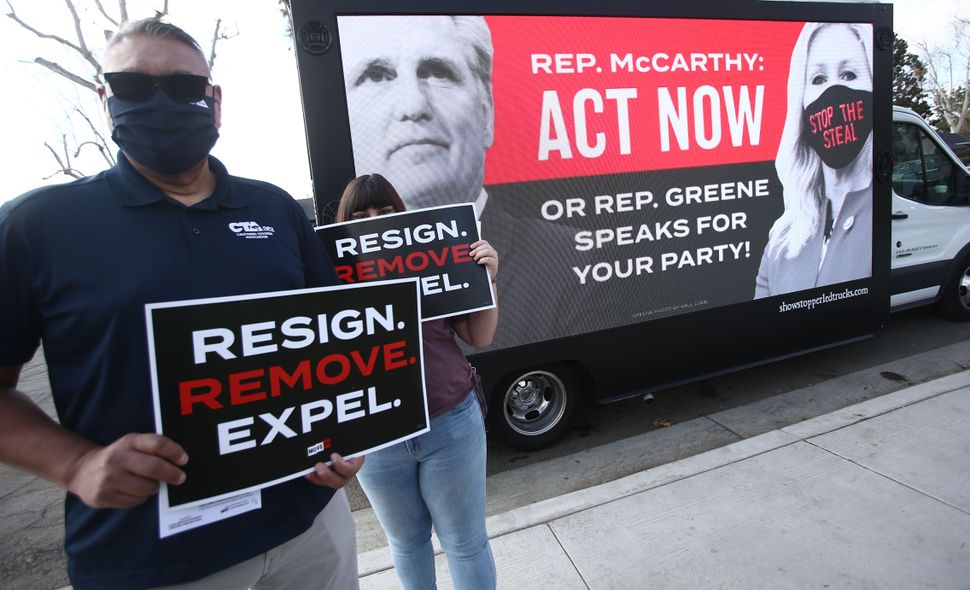 A protest at Rep. Kevin McCarthy’s Bakersfield office demands the removal of Rep. Marjorie Taylor Greene from House Committee on Education and Labor on February 04, 2021 in Bakersfield, California. By Tommaso Boddi/Getty Images

Over the course of our long history, the Jewish people have seen, with devastating frequency, what happens when antisemitism is granted a foothold.

Dangerous on the fringes, it swiftly becomes deadly when granted legitimacy. There is no middle ground with an ideology that seeks the elimination of an entire people.

Today the American people — not just Jewish Americans, but every last resident – stand at an inflection point. Lawmakers who have expressed belief in conspiracy theories, including QAnon, rooted in ancient canards told about Jews, from blood libels and well poisoning to monied cabals pulling the world’s strings, now sit in the nation’s legislature.

As a nation, we have a choice, which has been much discussed in recent weeks: Allow these newly elected members of Congress, including Marjorie Taylor Greene and Lauren Boebert, to retain their seats, granting legitimacy to their hate-filled ideology, or expel them from the people’s house.

As an American who lives in the state of Georgia, part of which is represented by Greene, this debate hits close to home.

There might be a temptation to seek a third, less decisive path, and try to win hearts and minds back from QAnon — starting with Greene and Boebert — through reasoned discourse. Democracy is no small thing, after all, and both Greene and Boebert were duly and freely elected. The House stripped Greene of her committee assignments — isn’t that enough?

Jews know too well what “duly and freely elected” can become when those elected officials peddling violent bigotry are met with half measures. Initially the leader of a marginal faction in German politics, Adolf Hitler had been losing voters when establishment politicians appointed him Chancellor in the belief that they would be able to control him. In that moment, Germany ceased to be a democracy, and the Nazis’ path to power was cleared.

There is no room in democratic discourse for ideologies that would violently dismantle democracy. It is no coincidence that Greene, Boebert and other elected officials who have publicly supported QAnon and similar antisemitic ideologies also supported the anti-democracy Jan. 6 assault on the U.S. Capitol. Jews have been the canary in the coal mine before; we are on the verge of becoming so again.

As an American, a Jew and as a representative of the rabbinic human rights organization T’ruah, I call on all members of Congress, particularly those Republicans who have welcomed QAnon into their ranks, to explicitly and unequivocally denounce the conspiracies in which Greene, Boebert and their followers have trafficked, and demand the resignation of all who have spread those theories. Should they refuse to leave, Congress must vote to expel them.

The theories spun by adherents of QAnon are not mere differences of opinion, or laughable fictions. Sprawling tales of Jewish-controlled forest fires or the harvesting of children’s blood are dangerous fabrications responsible for the dehumanization of millions of people. They threaten the very foundation of the American republic.

Recent years have seen an alarming number of public officials offer clear wink-and-nod support for this kind of bigotry, not least the former president’s instruction to the Proud Boys to “stand back and stand by.” A corresponding increase in anti-Jewish violence and the rise of politicians like Greene and Boebert are one clear result of that rhetoric. We have, in short, already seen what happens in America when any quarter goes unthwarted: Antisemitism goes mainstream, and Jews face deadly violence.

We must cut off all roads to legitimacy for antisemitism before it leads to more bloodshed. To do otherwise is to allow our democracy to crumble further and to willfully endanger Jewish Americans.

Rabbi Joshua Lesser serves Congregation Bet Haverim and is a member of T’ruah, a rabbinic human rights organization representing over 2,000 rabbis and cantors and their communities.

The fight against QAnon in government is only just beginning