Catching a glimpse of the Jewish future — on Clubhouse 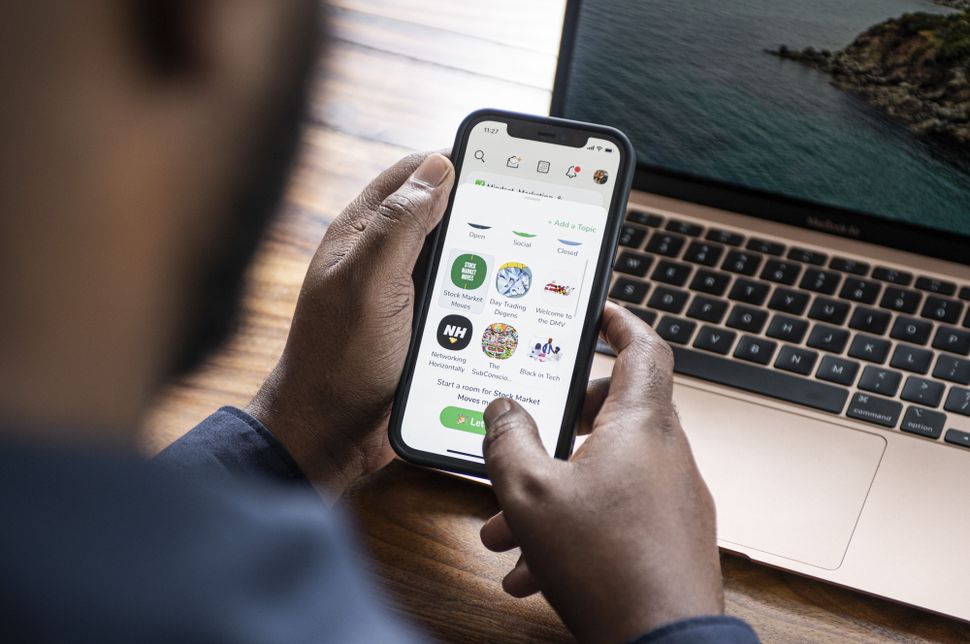 Jews have been talking for approximately 3,000 years. Despite having been written down for more than a millenia, we still call half of the commandments the “Oral Law,” remembering the days when they were shouted and whispered.

For a while, this focus on the spoken word seemed out of style in the visual wonderland of the social media era. Everything was about filters and poses, backdrops and selfies. You DM someone on Instagram if you like how they look. Snapchat visuals might not be forever, but their quick-hit videos up the visual stimulation ante. The newest king on the video block, TikTok, has exploded because of its addictive algorithm and ease of editing.

Our eyes bear the brunt of endless scrolling.

But a funny thing has happened during the reign of the eye: once again, the ear has begun to make itself heard.

The podcast renaissance is, by now well established, part of a broad trend of audio becoming an increasingly key part of online experience. Nowhere has this trend been more evident than the meteoric rise of the real time voice based app Clubhouse, which has quintupled its users in the last month, even as it remains invite-only, and available solely via Apple’s iOS software.

The concept is simple: you join a “room,” or conversation, based on a subject of interest. (Options range from politics to tech culture to karaoke auditions — really!) Once there, you can either hang out and listen to the conversation, or choose to speak up. You exit with a simple “leave quietly” button.

And the app is in the early stages of making a huge impact on how one particular community talks to itself: American Jews.

After a year in which synagogues and restaurants have been largely closed, and access to schools and communal activities has been limited, the Jewish conversation on Clubhouse suggests something about the future shape of Jewish American culture: geographically unbounded, non-hierarchical, very much online, and, above all, open and messy.

My first exposure to Jewish Clubhouse was in a room about dating, in which it quickly became obvious that the app was allowing something that would otherwise be very difficult to put together: a free-wheeling, honest conversation that included everyone from secular Jews to Chabad Chasidim to those firmly in the yeshiva world.

Married people and singles talked freely about what they wanted in a partner; their litmus tests and their red lines; turn-ons and turn offs; when wealth matters, and why. Some of it I found touching and impressive in its thoughtfulness, some of it — “I won’t date anyone whose parents aren’t also religious” — landed poorly with me. But by the time I left the room, I felt like I’d been both educated and provoked.

I don’t remember the last time that happened on Instagram.

The more I listened around, and hosted my own rooms, the more I realized that something truly significant was happening. Rabbi David Wolpe of Sinai Temple in Los Angeles hosts a weekly Clubhouse session on Thursday nights that attracts hundreds of participants. He told me that he is an “enthusiast” about the app’s potential and particularly enjoys the fact that “unlike Zoom, you can stand and walk while participating, come and leave easily and without fuss, invite people, and it isn’t that hard to join.”

Others share that assessment. “Since discovering Clubhouse, I can’t get enough,” said Shana Tibi, host of a Clubhouse club — effectively, a private, ongoing room — called the Jewish Love Lab, which she described as “a space to discuss all Jewish relationships, from dating to marriage support and inter-cultural Jewish dialogue.”

“It’s a perfect way to connect to Jewish people across the globe,” Tibi said, noting it’s also “a fantastic answer to the dating app fatigue many feel on swiping platforms.”

“On Clubhouse, you can’t hide behind an attractive photo — you have to come with substance.”

It’s not just Jews using the app for matchmaking and mingling. A club called NYU Girls Roast Tech Guys, in which singles pitch each other and their friends, regularly attracts thousands of participants.

But community leaders see the app as opening new doors for the whole community, not only those accustomed to life online. Shira Hecht-Koller, Educational Director of the 929 Project and a Clubhouse host, said she sees the platform offering “an unparalleled opportunity for Jewish community building, relational engagement and the facilitation of far-reaching conversations anchored in Jewish texts and ideas.”

Danielle Ames Spivak, CEO of the American and Canadian Friends of the Israel Philharmonic, and host of the Clubhouse rooms Hummus Thursdays and Jewish Geography, said “I have never had public social media profiles prior to Clubhouse and I don’t aspire to be an influencer. I got into Clubhouse because I truly believe in the power of the platform to do good for our community.”

The question of the moment, though, is whether Clubhouse is a pandemic phenomenon, thriving while the world is shut down, or whether it could genuinely become a lasting part of the Jewish and national landscape.

I hope it does. In Wolpe’s words, there is a “slightly illicit thrill” to eavesdropping on other voices. There is also something almost excessively intimate about welcoming so many strangers’ accents and intonations into your ears. And the fact that none of the sessions is recorded gives them a rare freewheeling and frank feel.

Perhaps all of these conversations, overheard but not preserved, are comprising something like a new Oral Law for this pandemic age, voices echoing up and down internet servers, inviting us into the conversations that are speaking our uncertain future into being.

Catching a glimpse of the Jewish future — on Clubhouse