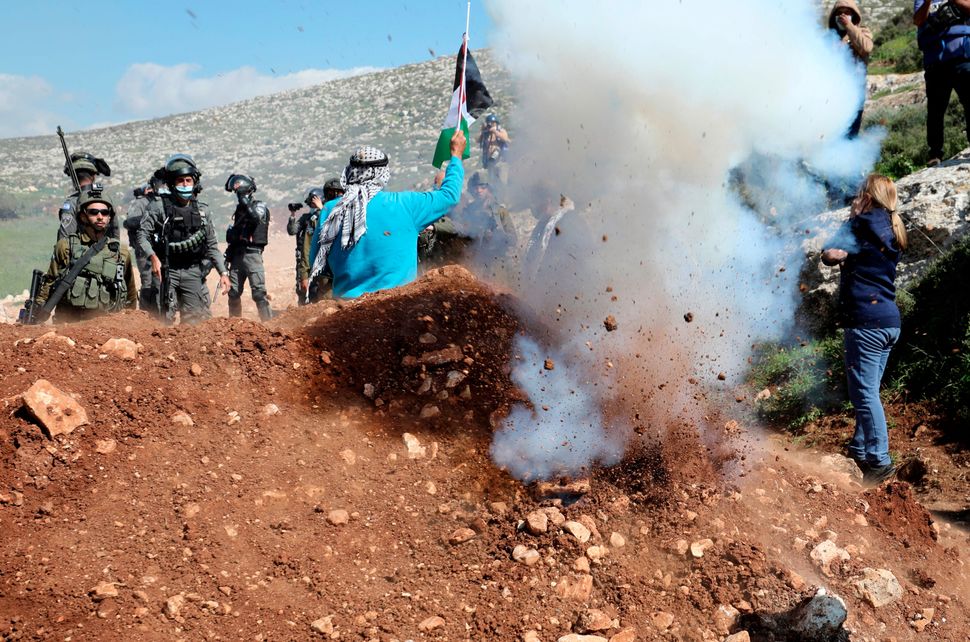 Palestinian protesters run to seek cover from tear gas fired by Israeli soldiers during a demonstration against Jewish settlements in the village of Beit Dajan near the city of Nablus in the occupied northern West Bank on March 5, 2021. By ABBAS MOMANI/Getty Images

Last Wednesday, the International Criminal Court announced it was opening an investigation into alleged crimes committed in the occupied Palestinian territories.

It was a significant development in a process that has seen countries clash over whether those territories even fall within the ICC’s jurisdiction. Fatou Bensouda, the court’s outgoing chief prosecutor, succeeded in convincing the ICC’s pre-trial chamber last month that, in fact, they do. But both Israel and the United States insist that since Palestine is not a sovereign entity, and Israel has not signed the court’s founding Rome Statute, the current investigation is not legally legitimate.

If that argument sounds like a lot of jargon to you, you’re not alone.

But behind the legalese is a story of tremendous significance: Israel is being internationally investigated for war crimes and crimes against humanity. And, as such, the ICC probe will have important implications for American Jews: In what’s already a fragile political moment for our community, the probe is likely to worsen and accentuate political divisions.

The centrality of Israel as a political issue in American Jewish life is often exaggerated, but it is clearly an issue of concern for the largest Jewish institutions, many of whom, including the Anti-Defamation League and the American Jewish Committee, have condemned the ICC probe. Terms like “war crimes” and “crimes against humanity” rightly carry a powerful stigma, and many in the community will resent those charges being attached to Israel.

It’s also possible, if not likely, that the ICC investigation will have implications for American actors in the region. The investigation is said to focus on three areas: the 2014 war in Gaza, Israel’s deadly suppression of demonstrations on the Gaza border in 2018 and Israel’s settlements in the West Bank. A full investigation of the settlements, which are widely regarded as illegal under international law, cannot overlook the role of civilian actors — no matter their nationality — in their development.

It’s unlikely that the ICC’s prosecutors will seek to hold those who have financially supported and advocated for settlement projects personally accountable. But by opening an investigation in the Palestinian territories, the ICC has trod close to associating those individuals and groups with a crime, an association that will become explicit if the probe finds that the charges against Israel have any validity.

It’s likely that many in the Jewish community would oppose the ICC investigation no matter what. But this context makes it particularly likely that a combination of outrage and fear will propel some in our community to press the Biden administration to show even tougher opposition to the court — one of several actions that could deepen divisions in the American Jewish community.

We already see these differences playing out. The relatively conservative Conference of Presidents of Major Jewish Organizations chose to echo Israeli Prime Minister Benjamin Netanyahu’s chosen line, and accuse Bensouda of harboring anti-Israel or even anti-Jewish bias; the progressive J Street defended the court without endorsing the investigation itself; and the non-partisan Americans for Peace Now said the development was an “unavoidable consequence” of the continued occupation. Only groups further to the left of the mainstream, including Jewish Voice for Peace, have outright endorsed the probe.

The fact that the court’s prosecutors are considering a wide range of cases increases the potential for acrimony. Effectively, the number of ways in which the investigation could splinter the American Jewish community is staggering.

One factor will be the subjects of the investigation once it narrows in on actual people with faces, names and worldviews. For example, if a senior Israeli military figure became a subject of focus for their part in the 2014 war, they would likely receive a great deal of sympathy from a wide range of the Jewish community. Figures associated with the settlements, on the other hand, would presumably mainly find support on the political right.

Another factor will be the Biden administration’s ongoing response to the investigation. The simple truth is that the administration, if it remains true to its stated values of multilateralism and engaging international institutions, cannot match what the Republicans might promise in retaliation to any judgments seen as hard on Israel. It seems inevitable that in the 2022 and 2024 election cycles, this investigation may put an even rougher edge on existing divides.

But beyond partisanship, the probe will almost certainly reignite passionate debates about the place of Jews in the American polity. The ICC was founded as a court of last resort for victims of war crimes and crimes against humanity — acts that are, or should be, regarded as universally wrong. The normative core of the American reaction will involve a struggle between realism and idealism, a debate with a long and painful history among Jews.

Predicting the direction of this case is a fool’s game, and there is still a chance it will not proceed at all. But if it does move forward, the path ahead is strewn with potential conflicts. Far from unifying American Jews, this new “threat” will probably shine a much brighter light on communal divisions. With the prospect of American Jews being directly implicated, the stakes are even higher than usual.