What Jews should learn from the Amanda Gorman translation controversy 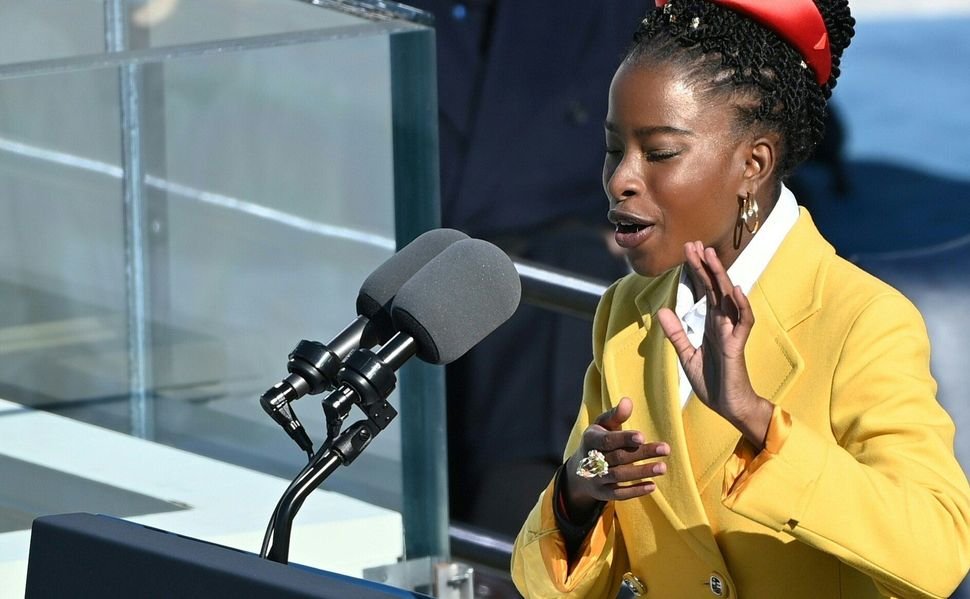 National youth poet laureate Amanda Gorman recites during the inauguration of Joe Biden as the 46th US President on January 20, 2021. By BRENDAN SMIALOWSKI/Getty Images

Joe Biden’s inauguration was supposed to be a relatively subdued affair, transpiring as it did during a raging pandemic and the aftermath of a violent insurrection at the Capitol. The much-vaunted peaceful transfer of power was less a victory lap than a survivors’ huddle. There were no balls, no galas.

Against this backdrop of grey and worry, the poet Amanda Gorman’s memorable recitation of her poem “The Hill We Climb” popped like a firecracker. Her words, right for the time, were strong and brave. They were patriotic and challenging, hopeful and truth-telling. The reaction was electric: sales for Gorman’s books skyrocketed and Gorman entered the celebrity stratosphere. It was an inspiring story of our moment, demonstrating that poetry and politics could come together to give us something like a literary rock star.

But what happened next is telling about the state of our culture, for the wrong reasons.

The explosion in Gorman’s visibility necessitated the need for international translations, as publishers prepared to ship her books to audiences all over the world. This is standard practice, and authors generally find the ability of their work to reach people of different cultures and continents to be one of the most gratifying parts of bringing a book into the world.

But with Gorman, that process hit a snag.

First, Gorman’s Dutch translator, Marieke Lucas Rijneveld, who as a novelist won the 2020 International Booker Prize, resigned from the assignment to translate both “The Hill We Climb” and Gorman’s forthcoming first poetry collection, following vociferous criticism that they were not black. (Rijneveld uses the pronouns “they” and “them.”) This, despite the fact that Gorman herself had approved the choice of Rijneveld as one of her translators.

Then Gorman’s Catalan translator, Victor Obiols, was told after finishing his translation of “The Hill We Climb” that Gorman’s representatives had decided he wasn’t quite right for the job. “They told me I am not suitable to translate it,” he told AFP. “They did not question my abilities, but they were looking for a different profile, which had to be a woman, young, activist, and preferably black.”

For those who believe that art is inextricably linked to biography, the gaps between Gorman and these two European translators were too large to justify, amounting to something like appropriation.

There is no doubt that art and life are connected in intimate ways, or that how literature circulates around the globe is a product not just of prose, but also of power. But the fact that the translation of Gorman’s work has become a scandal rather than a celebration speaks to the ways in which our current cultural climate can inhibit empathy rather than expand it. Adhering to a view of identity that sees likeness only in the most limited of ways, across the vectors of race and gender, makes us all poorer.

One of the pleasures of cracking open a book is meeting a different kind of mind. We live so few years, have so few experiences, and are so limited in our perspectives. Reading is still the best technology out there for widening our sight lines. And translation is all about building bridges between similarity and difference. It depends on an atmosphere of openness and a curiosity that’s more than skin deep.

It is especially minority writers who should be alert to the danger of this approach. The essence of art is its ability to start in one place and end up in another. The very last thing that liberals should want to do is sequester that exchange. Writers like Philip Roth and Saul Bellow remade American fiction because they spoke to everyone. James Baldwin and Toni Morrison grace us all with their vision. Elena Ferrante, an anonymous Italian writer, reached millions with her Neapolitan Novels through the able translation of Ann Goldstein, a Jewish woman from New Jersey.

Gorman’s inaugural triumph speaks to the promise of a poet to charge old words with new energy. The rejection of her would-be translators based exclusively on their identities highlights a profoundly illiberal turn in the republic of letters. If you’re not worried, you should be.

What Jews should learn from the Amanda Gorman translation controversy