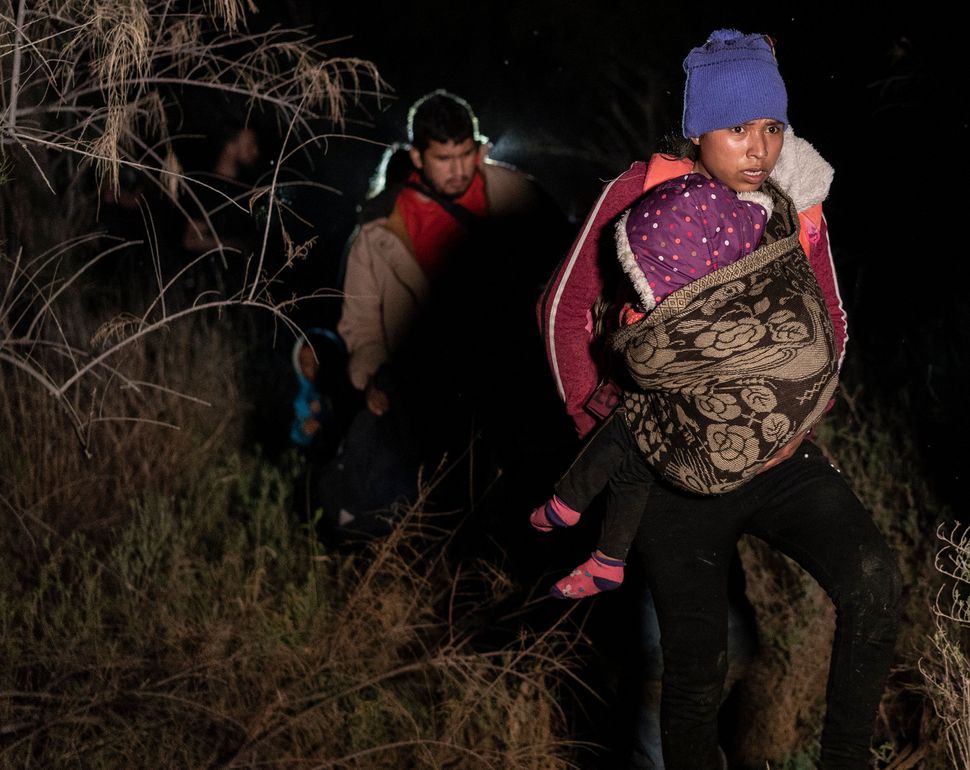 Asylum-seeking migrants’ families make their way to the location where they turn themselves in to the U.S. Border Patrol after crossing the Rio Grande river into the United States from Mexico on April 22, 2021 in Roma, Texas. By Go Nakamura/Getty Images

While President Biden made mention of immigration reform in his first address to Congress this week, the fate of refugees was conspicuously absent. After weeks of whiplash for refugees and their advocates, we’re still waiting for clarity on a path forward.

On April 16, President Biden announced he would maintain the limit on the number of refugees annually admitted to the country at 15,000, the lowest level in history, initially set by President Trump. The announcement reversed a key campaign promise, and was a violation of Biden’s commitment to refugees.

As advocates for those who are seeking refuge from persecution, we were deeply disappointed. HIAS and our allies pushed back, calling out Biden’s broken promises.

By 5 p.m. that afternoon, the White House changed direction, issuing a statement that there had been “some confusion” about the President’s order, and that by May 15, President Biden would raise the refugee ceiling from the record low number. Details on what the new cap will be remain murky.

Biden came into office more apparently energized to welcome refugees than perhaps any other president in history. Within two weeks of taking office, he issued an executive order outlining a comprehensive review of the country’s refugee program. On February 12 he sent three Cabinet-level officials to Congress to make the “emergency” case for ending the discriminatory anti-refugee policies of the Trump administration and raising the refugee ceiling from the historical low of 15,000 to 62,500 for this fiscal year.

Then suddenly, after laying out an ambitious and courageous agenda to lead the world on refugee protection, President Biden and his cabinet stopped talking about it.

As president of a Jewish refugee organization that desperately tried to rescue people from Nazi-occupied Europe, I know the history of America’s approach to refugee issues is one filled with disappointment. Earlier this month, in his remarks at the U.S Holocaust Memorial Museum, Secretary of State Tony Blinken recognized his department’s complicity in the failure to protect Jews who were trapped inside Nazi-occupied Europe, with no place to flee.

Blinken’s speech focused on the culpability of State Department officials like Breckinridge Long, even though ultimate responsibility for America’s failure to protect refugees rested with President Franklin D. Roosevelt, who was well-briefed on the dire circumstances facing European Jews. Roosevelt refused permission for the MS St. Louis, which carried 937 Jewish refugees, to dock. He did not support the Wagner-Rogers bill to rescue 30,000 Jewish refugee children. He persistently offered excuses for why the U.S. could not welcome Jewish refugees.

Now, as in 1938, America’s responsibility to protect and welcome refugees ultimately resides in the White House.

Since President Biden’s inauguration, HIAS and our allies have called on him to immediately raise the number for admissions for refugees. Even before his April 16 flip-flop, his inaction has had real consequences.

For instance, the State Department, taking Biden at his word that he would imminently lift Trump’s restrictions to the program, booked March flights for over 715 previously approved and vetted refugees who could not travel under Trump’s restrictions. Resettlement agencies, including HIAS, prepared to welcome them. But as the promised action stalled, the State Department had to cancel those flights. The refugees’ hearts were broken, as were ours, and those of the thousands of family members waiting for them.

As the Trump administration’s needless restrictions on refugee admission have shown us, it’s a mistake to entrust the protection of refugees entirely to the executive branch. Congress should act to pass the GRACE Act, which would set a statutory floor for refugee admissions, an important first step toward a more humane, less mercurial refugee policy.

The American Jewish community owes its existence to those times when America opened its doors to refugees and immigrants. But we are not ignorant of history. There were also times when America did not open its doors to us. Biden should keep his word and raise the cap on refugees, but Congress should also set a standard of welcome for refugees to hold him and future presidents accountable so that America does it part to ensure that persecuted individuals can exercise the basic human right to seek and enjoy asylum.

Mark Hetfield is the president and CEO of HIAS, an international Jewish humanitarian organization that provides vital services to refugees and asylum seekers in 16 countries.