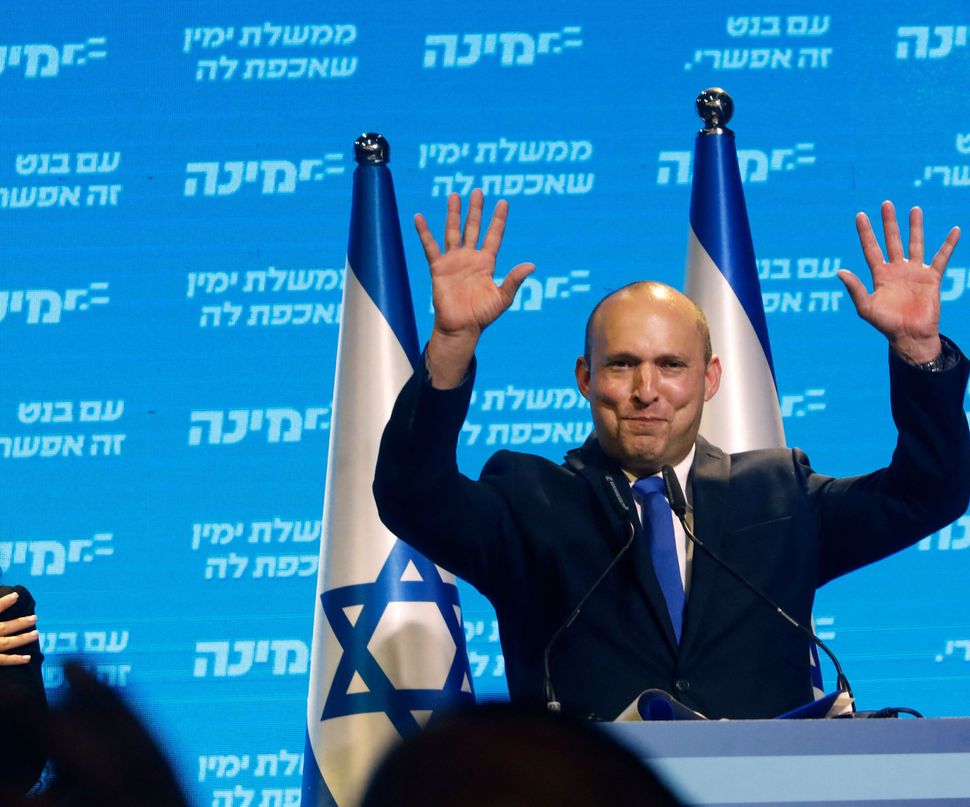 Israelis who wish to end the seemingly infinite tenure of Prime Minister Benjamin Netanyahu have in recent days pinned their hopes on a new idea: the prospect of a national-unity government led by Naftali Bennett, a former defense minister who heads the right-wing Yamina party.

In theory, this Bennett-led government would be non-ideological, and the premiership might eventually be passed to Yair Lapid, the chairman of the centrist Yesh Atid party. But the possibility of elevating an ultra-nationalist figure like Bennett to the pinnacle of Israeli politics is one that ought to invite serious caution, both from left-wing parties in Israel and by American Jews who support them.

Getting rid of Netanyahu has become the Israeli opposition’s goal to the exclusion of all else. But should that include good sense?

With the caveat that any digestible account of this situation will be crude, the Knesset currently includes three major political blocs.

First is the pro-Netanyahu bloc, comprised of Likud, Netanyahu’s conservative party, alongside parties representing most of Israel’s Haredi community and the Religious Zionist Party, a far-right group that includes Kahanists.

Second is the anti-Netanyahu bloc, which consists of the centrist parties led by Yair Lapid and Benny Gantz; the Zionist left parties of Labor and Meretz; parties led by Gideon Sa’ar and Avidgor Liberman, right-wing opponents of Netanyahu; and the predominantly Arab Joint List.

Finally, there are two parties who have not committed to supporting or opposing Netanyahu: Bennett’s Yamina and the United Arab List, a conservative Arab party headed up by Mansour Abbas.

Neither of the first two blocs control 61 of the Knesset’s 120 seats, the majority needed to form a government.

The only way for Netanyahu to remain prime minister, then, would be to win the backing of both Bennett’s Yamina party and the United Arab List without losing any other members of his bloc. Since the Religious Zionist Party is opposed to any arrangement with Arabs, Netanyahu has hit a wall.

Given the sheer number of seats belonging to parties opposed to Netanyahu, and the fact that the prime minister’s mandate to form a government expires this week, it’s much easier to imagine a government headed by Bennett.

Bennett, aiming to assemble a coalition connected solely by the goal of ousting Netanyahu, would need the support not only of Yesh Atid and more conservative opponents of the prime minister, but also the dovish and left-leaning Labor and Meretz parties.

As an observer of Israeli politics with abundant sympathy for the country’s beleaguered left, I want to feel confident that getting rid of Netanyahu — who is facing an ongoing corruption trial at the same time he’s trying to undermine Israel’s independent law enforcement and judiciary — is worth any price. The alternatives — continued Netanyahu rule, or a fifth election since 2019 —are hardly appealing.

But the lack of good alternatives doesn’t change the fact that the idea of Prime Minister Naftali Bennett is something well worth fearing.

Bennett’s political raison d’etre is to vanquish any possibility of a Palestinian state while establishing permanent Israeli control over most of the West Bank. If he achieves that aim, the vast majority of Palestinians who live outside this area would continue to live under Israeli military occupation, even with promises that they’ll be given some measure of “autonomy.”

The favorite current justification for the possibility of giving Bennett the government, and thus the authority to move forward with this horrifying plan, is that he’ll be constrained by the need to govern in cooperation with centrist and leftist parties. Indeed, Bennett has pledged that such a government will neither annex nor withdraw from settlements.

That’s true. But the true danger of this plan is that a first turn for Bennett in the prime minister’s chair could give him a leg up in future elections, where he would undoubtedly try to assemble a right-wing government that could more easily take the extreme steps he has advocated for in the past. That’s especially dangerous given Bennett’s longtime quest to sanitize his position, formerly considered one that belonged exclusively to the right-wing fringe.

With a wide spectrum of political parties now preparing to support his bid for prime minister, Bennett is closer to achieving that sanitization than anyone should be comfortable with.

It may be that there is no realistic alternative for the Israeli left but to go along with a unity government led by Bennett and Lapid. If it comes to pass, they must waste no time celebrating Netanyahu’s downfall. Instead, the left must prepare to fight a dangerous and newly empowered foe — who also happens to be the man they are supporting for prime minister.