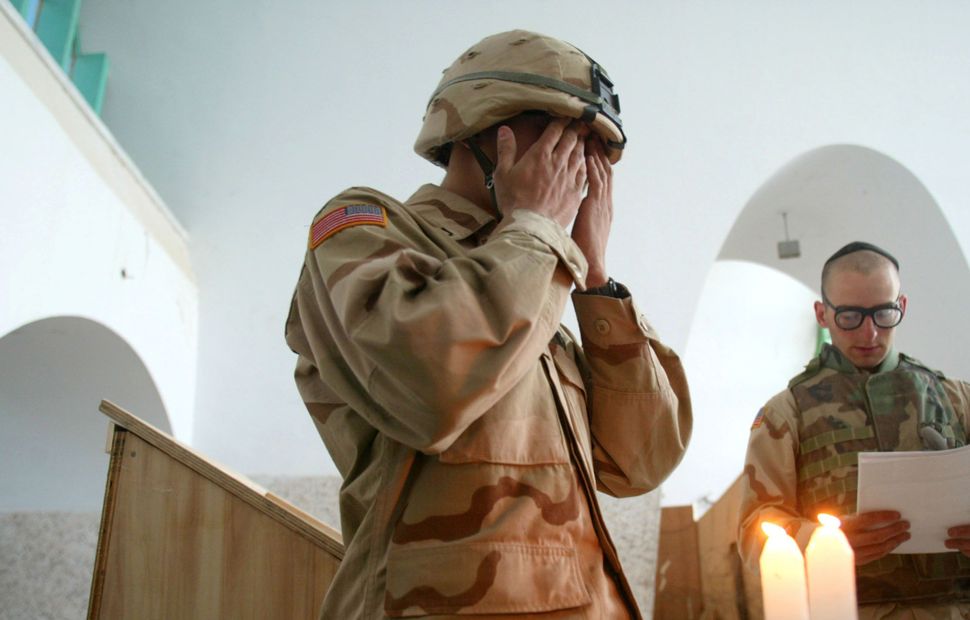 Imagine if there was a job in America — a government job — that was advertised with the condition that “Jews, Muslims, women, Mormons, LGBTQ people and Black people need not apply.“

We would be shocked.

But without things spelled out so explicitly, in the Army Chaplain Corps, this kind of perspective is business as usual.

The Army chaplaincy is an office that provides a critical source of support for those who are willing to fight and die for the nation. And it’s long been a surprisingly diverse one.

The Civil War opened the chaplaincy for the first time to non-Christian, and non-male leadership. In 1864,the 8th Wisconsin Volunteer Infantry Regiment became the first unit to select a female chaplain, Reverend Ella Elvira Gibson. But Gibson was not recognized by the Army, because the institution wouldn’t allow a woman could serve. Her service to our nation was only recognized by the federal government in 2002.

Jewish chaplains were also Civil War trailblazers. President Lincoln thought it was unconscionable that Jewish soldiers could die for their nation, but not have their faith recognized. He had the law changed to allow rabbis to become chaplains, and appointed the first Jewish chaplain, Rabbi Jacob Frankel.

Yes despite the long record of diversity in the chaplaincy ranks, all 25 Chiefs of Chaplains since the office was established in 1920 have been Christian — 18 Protestant, and seven Catholic. All have been men. And all but two have been white.

In my decades as a rabbi and Army chaplain, I have found that LGTBQ soldiers often feel they have nobody to turn to. In my chaplaincies, once the word got out that they could talk to the rabbi, no matter their faith, they often filled my schedule. I gave those soldiers guidance as best as I could. And I ached for how little hope they had that they would ever be able to find someone like themselves to turn to.

The Army is an institution in which rank and structure carry enormous significance. But a downside of this system is that meaningfully diversifying the highest ranks takes extraordinary effort. Exclusion breeds more of the same. If it’s known that there is a glass ceiling for chaplains who are not white, male Catholics or Protestants — and it is known — the system of rank ensures they will lose respect and credibility when dealing with their peers, as well as other officers and soldiers.

After all, there’s no chance of them advancing, so why treat them as if they have authority?

Things are particularly bad when it comes to women: The Army has a well-known problem with sexual harassment and assault, and I wonder if a small part of the solution might be promoting and empowering female chaplains, giving them authority to help change a culture that broadly discriminates against women.

We can do better. We must do better. Let us build an organization in which people of all faiths, gender identities, sexual identities and backgrounds can climb to the highest heights.

If we as a nation wish to seriously address the issues of white supremacy, sexual harassment and religious and racial discrimination that plague us, then one important step we can take is to meaningfully diversify the upper ranks of the Army chaplaincy, along with the chaplaincies belonging to the other military branches. It is those kinds of little changes that will help direct our national culture away from its worst instincts.

Carlos C. Huerta is a retired American soldier. He started his career as an artillery officer in 1972 and then became a chaplain in 1994. He was the Jewish chaplain at the United States Military Academy at West Point for nine years and in 2003 volunteered for Iraq with the 101st Airborne Division. When his troops were stationed in Mosul he held the job of Minister of Education for one sector of the city. In addition to the Bronze Star, he earned for service in combat, he was honored with the chaplain of the year award by the Orthodox Rabbinical Council of America.