Hamas rocketed my hometown — and the White House is responsible 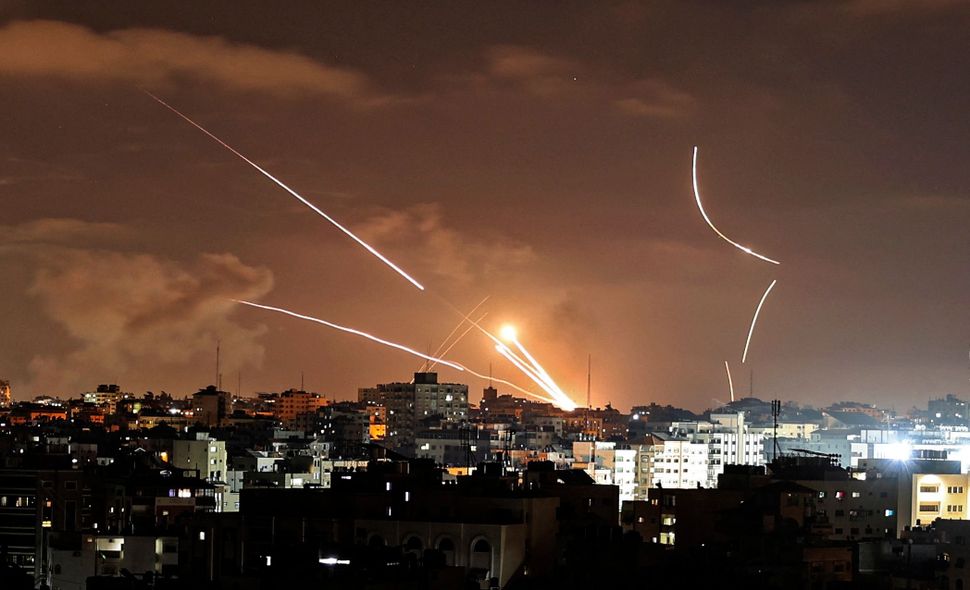 Rockets are launched from Gaza City, controlled by the Palestinian Hamas movement, towards Israel on May 12, 2021, amid the most intense Israeli-Palestinian hostilities in seven years. By Mahmud Hams/AFP via Getty Images

As I write, the sirens have stopped wailing, the Iron Dome has finished its dull thumping, and people have left the bomb shelters. Gaza’s rocketeers have switched their sights from my hometown Beit Shemesh, but the sky over Tel Aviv is now lit up with a murderous pyrotechnic display.

Across Israel, tens of thousands of children will be scarred by the last two days of bombardment. But although Hamas fired the rockets, President Biden’s administration is to blame.

There’s a direct line to be drawn between the White House’s policy of evenhandedness and the renewed bellicosity of the Palestinians.

For four years under President Trump, America unreservedly had Israel’s back. Beyond the more dramatic moves, such as recognizing Israeli sovereignty in Jerusalem and relocating the U.S. embassy, America was in Israel’s corner — and the world knew it.

In the United Nations, Ambassador Nikki Haley torpedoed every anti-Israel resolution. When Palestinians were killed trying to storm the Gaza border in 2018, Secretary of State Mike Pompeo said that the U.S. “fully supports Israel’s right to defend itself.” Absent were the Obama-era warnings about “restraint”; the moral travesty of comparing a democracy defending itself with a terror organization bent on killing Jews. When the Palestinian leadership made it clear that it would be boycotting U.S. regional peace efforts, the U.S. stopped all aid to the Palestinians.

Palestinian leaders — and Arab states — noticed that the U.S. was backing Israel to the hilt. So not only was there relative quiet on Israel’s streets and in the skies, but a series of historic peace agreements between Israel and Arab states were signed last year — a direct outcome of the perception that America was solidly behind its ally, and that terror would no longer be an acceptable replacement for diplomacy.

Everything changed when President Biden entered office in January. While the Biden administration has stated their support for the Abraham Accords, the idea of further peace agreements or talks was quietly dropped. Biden quickly restored funding to the Palestinians. There was a sharp change in tone when it came to the region. In place of Israeli sovereignty in the West Bank and peace deals with the Arab world, Secretary of State Anthony Blinken made early and insistent references to two-state solutions.

However, as Martin S. Indyk — a former U.S. ambassador to Israel and a former special envoy for Israeli-Palestinian negotiations — told The New York Times this week, “the problem with the Middle East is that you can try to turn your back on it, but it won’t turn its back on you.”

And yet, when Israelis were attacked with stones as Palestinians rioted across the country over the last few days, the State Department reverted to the chilly formulations of the Obama era, trying their best to stay out of it: “it is absolutely critical that all sides exercise restraint and refrain from provocative actions and rhetoric,” a spokesman said — once again shamefully implying moral equivalence between the two sides.

Less than four months into Biden’s presidency, Israel has experienced more terror attacks and rockets from Gaza and the West Bank than it did at any point in the last administration. That’s surely not a coincidence: four years of Trump showed that full-throated support of Israel is not just moral, it is good policy as well, bringing peace and stability in its wake.

The current White House occupant seems not to have gotten the message. In true Obama-esque mold, Biden fails to understand that creating daylight with Israel emboldens Arab extremists to dream of ever greater gains from terror.

So as Israeli parents struggle to explain to their children why they have to cower in their shelters, it’s hard not to blame the misguided occupants of the West Wing.

Hamas rocketed my hometown — and the White House is responsible