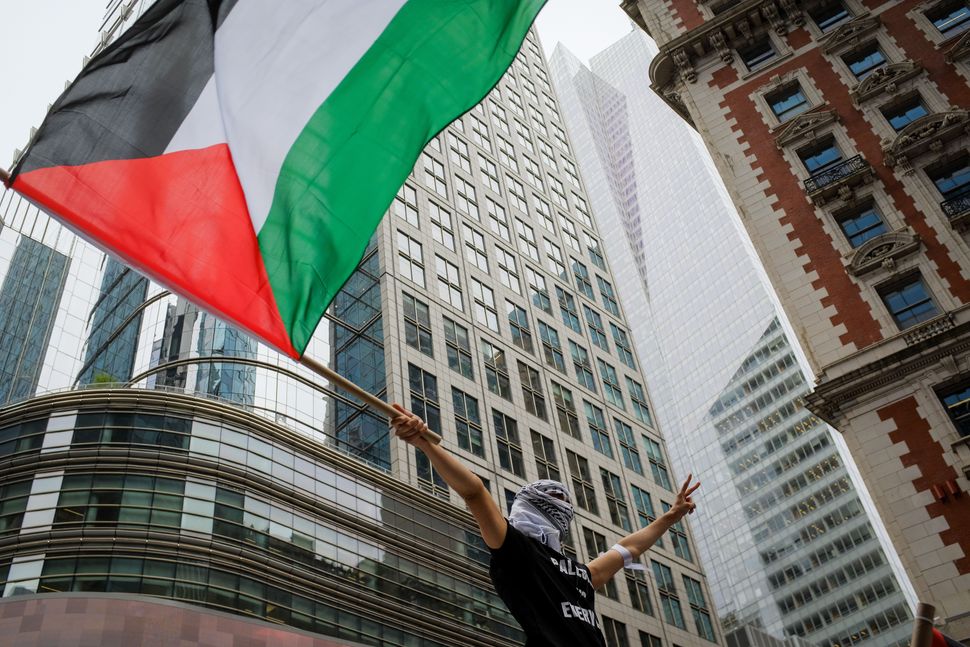 As rockets continue to crisscross the skies between the Mediterranean Sea and Jordan River, as horrific riots break out in cities from Lod to Ashkelon, a more far-flung front has opened up as a result of the violence in Israel: a war for public opinion here in the United States.

Just as the scale of the Hamas rocket attack suggests a new phase of an old conflict, so too does a transforming American political culture the rise of a novel foreign policy consensus — one that unites left-wing political players, elite media outlets, online meme culture, and energized activists.

After flexing its muscles in the domestic sphere by policing speech, reshaping curricula to put its vision of race and history front and center, and advocating for the abolition of law enforcement during an explosion of crime, it has now set its sights on more distant shores.

We are seeing the emergence of woke foreign policy, currently manifesting as an assault on the right of Israel to defend itself. Its method? Fold pro-Palestinian activism into the existing catechism of oppression and sympathy. The stakes are no longer about Israel winning the battle for public relations. It is about Israel defending its right to survive.

The Israeli-Palestinian conflict has been fairly muted since 2014, so this new wave of violence is the debut moment for the centerpiece of this new approach to the world — and its advocates are taking full advantage. The seeds that were planted by groups like If Not Now were laid during the last war in Gaza, and are now in full bloom.

It is no surprise that Israel is the stage for its premier. While the Middle East has only been quiet if you just count conflicts that involve America or Israel, and forget about the atrocities of ISIS and Yemen, for the purveyors of this point of view, America is the world. Notions of oppression that allegedly structure life here in the U.S. are imported wholesale to the Middle East.

New York Congressman Jamaal Bowman, who represents a robustly Jewish district in Riverdale and enjoyed the support of prominent community leaders, is a prime example. On Tuesday, he tweeted “enough of Black and brown bodies being brutalized and murdered” during Israel’s attempts to defend itself from quadruple digit numbers of rockets and suicide drones, and that the United States “must step in.”

Bowman is hardly alone. Reps. Ilhan Omar, André Carson, and Rashida Tlaib noted in a statement on Tuesday that they were “horrified by the violent assault by Israeli forces on the Al Aqsa mosque,” noting with dismay that “we continue to provide the Israeli government with over $3 billion in military aid every year — with no conditions or accountability for wanton human rights abuses and continuing illegal seizures of Palestinian land.”

We already know how Rep. Omar feels about the Benjamins, but what is remarkable is that a whole raft of journalists and pundits seem to have come to the conclusion that she is a foreign policy oracle.

New York Times Opinion writer and Pulitzer Prize winner Nicholas Kristof agrees with her, sagely asking in an editorial whether supporting our strongest ally’s fight for its survival is “really a better use of our taxes than, say, paying for Covid-19 vaccinations abroad or national pre-K at home,” as if that was the choice at all. Why spend money on a military ally, a “rich country,” in a dangerous region, after all, when we can spend it to cure all sickness and alleviate all poverty?

There is no shortage of evangelists of this new orthodoxy. A Times reader could also click over to a ‘guest essay’ from a creative writing teacher in Gaza, (but alas none from an Israeli in a bomb shelter). She could also read an essay by Peter Beinart, who seems to feel now is the best time to urge American Jews we must wholeheartedly embrace the right of Palestinian return, even as many of those Palestinians who never left are urged by their leaders to cut off Jewish heads with cheap knives.

If Teen Vogue is more your speed, you can read one of the three virulently anti-Israel pieces on offer there, which likewise seems to consider woke identity politics the most fruitful lens through which to view a multifaceted religious, ethnic, and political conflict.

Of course, orthodoxies must not only be promoted — heretics must be denounced. We thus were treated to the spectacle of NYC Mayoral frontrunner Andrew Yang being pressured to recant, by Rep. Alexandria Ocasio-Cortez and others, the utterly pareve statement, “I’m standing with the people of Israel who are coming under bombardment attacks, and condemn the Hamas terrorists… The people of N.Y.C. will always stand with our brothers and sisters in Israel who face down terrorism and persevere.”

You can read it again if you’d like, and wait for the outrage to build. It apparently did for AOC and a mob at a campaign stop in Astoria, with the Congresswoman calling Yang’s take “utterly shameful” and “chest-thumping,” as she sternly warned him not to pull that stuff in Astoria during Ramadan.

Increasingly, this same pressure is being exerted not only on any Democratic politician that deviates from the cultural mores, but on any Jewish American who stands up for Israel’s right to simply exist and fight for that existence, whether they do so on college campuses, the internet, or any of the places in between.

As of yet, this woke foreign policy is still a shadow government: Joe Biden has admirably held firm against efforts to evangelize this world view in the White House. But social media slanders and Congressional crusades are not so far from real life as they might seem. And as Israel continues to legitimately defend itself — or simply continue to exist — there will always be another war to fight.