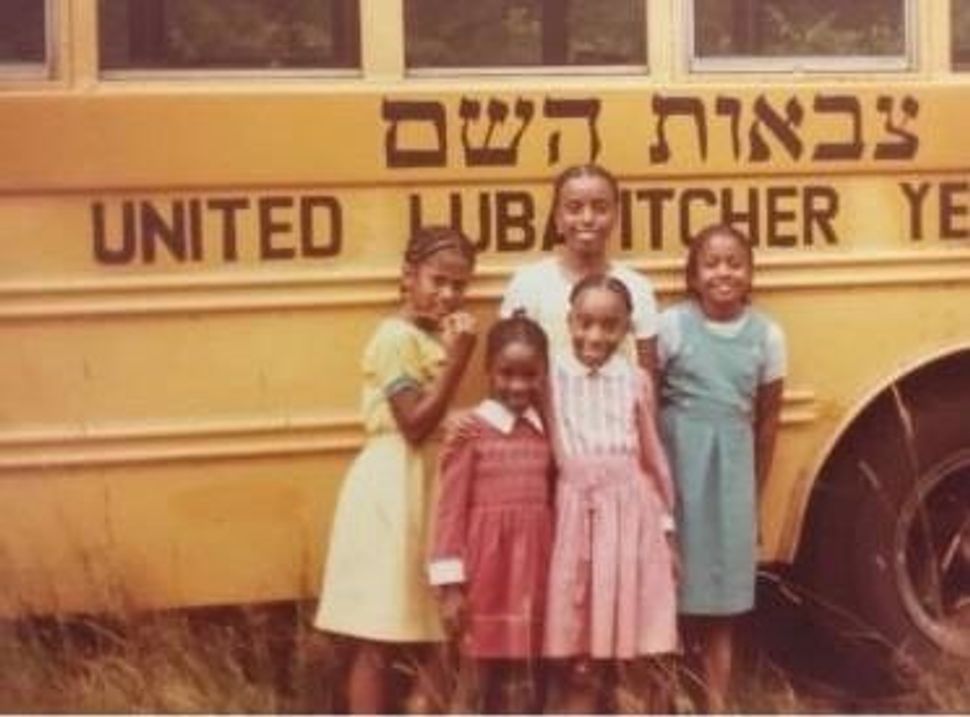 Akedah Fulcher-Eze (rear) and her sister Yavilah (pink dress) join their cousins (from left) Taphilah, Yapha and Shelene Tate in front of their Lubavitch school bus in Crown Heights in the 1980s. Courtesy of Akedah Fulcher-Eze

Akedah Fulcher-Eze grew up in a Black and Orthodox Jewish family in the Brooklyn, New York neighborhood of Crown Heights and lived there during the violence of Aug. 19-21, 1991. Her family was well known to both Black and Jewish residents, and they were not alone, she says; the neighborhood was home to about a dozen other Black Jewish families. Yet their stories have been largely if not entirely missing from most media accounts of the riots and pre-existing tensions between the two groups — a narrative that Fulcher-Eze says would drastically change the media accounts of the events, often portrayed as a pogrom of Blacks against Jews.

The founder of SULAM Africa and CEO of Eze Yoffi Edutainment Studios, organizations created to “empower, uplift, and magnify African Jewish voices in modern Jewish media,” Fulcher-Eze resides in Birmingham, Alabama, and Enugu, Nigeria. She spoke with the Forward’s editor-at-large, Robin Washington, on the eve of the tragedy’s 30th anniversary.

You’ve questioned the media narrative in articles about what’s commonly called the Crown Heights Riot. What are the main things reporters got wrong — and still get wrong?

First off, simply calling what happened in Crown Heights “a pogrom” or “an antisemitic riot” without ever focusing on the death of 7-year-old Gavin Cato or the circumstances surrounding it is a bit problematic for me. An accident involving the Rebbe’s motorcade took place and though the driver did not intend to kill Gavin, a child lost his life and another was permanently injured. Those children were hurt long before anyone threw a rock or smashed a window. We need to own that.

Tell me about your family, and the neighborhood when you grew up.

My family moved to Crown Heights in the 70s. First on Carroll Street and then to President Street. Our apartment was in “the Jewish building” in the middle of the block. Out of the 40 or 50 apartments, in that HUD building only three of the apartments were rented to Blacks. Though people for the most part got along, there was always tension around public programs and housing.

Blacks had lived in quiet conflict with their Lubavitch neighbors for years. Gavin was a child who bagged groceries for my mother and others. Seeing him pinned under a car, and his sister pinned to a wall while a driver with few injuries was rushed away by Hatzolah — a Jewish ambulance service — must have been a trigger. Those people were already mortified and in pain. Their pain turned to anger and their anger at being systematically ignored turned to violence. That fact was repeatedly ignored in the reporting. The Black people on my block weren’t antisemites, they were human beings tired of being displaced and treated like second-class citizens. 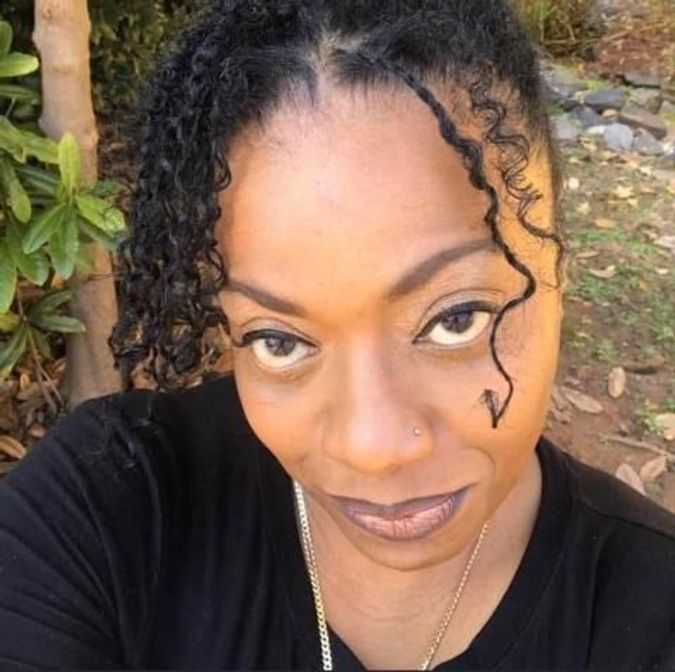 The President Street of my childhood was not a hate filled place. On a given day you could hear Arabic, Spanish, Hebrew, Yiddish, Russian and English spoken in the street. Black and Jewish girls played double-dutch together in the street. We watched each other’s cars when it was time to move them for the sanitation crews. We built sukkoth in our courtyards and driveways.

Over time, more and more Lubavitch families began moving into Black-dominated neighborhoods, crossing what was then the divide between Crown Heights and Bedford-Stuyvesant, and something changed. Fewer resources were available for people of color and Blacks began to feel displaced. Section 8 apartment buildings were renovated and those that had been rented to low-income people of color before were now occupied by Hasidic families.

Your family was affiliated with Chabad?

Absolutely. My father worked for Rabbi J.J. Hecht, as a bookkeeper for the National Committee For The Furtherance Of Jewish Education. Rabbi Hecht was our Rav but he was also the Lubavitcher Rebbe’s personal translator. We attended Fabrengens at 770 regularly, received dollars and Kos Shel Brachah from the Rebbe himself…even while maintaining a Sephardic minhag. Like most of the Sephardim in the area we attended a small Mizrachi shul with the other Sephardic Black Jewish families in our community.

I actually graduated from Bais Rivkah, the Chabad Lubavitch girls yeshiva, with honors at the top of my class. I spoke as class valedictorian at graduation. It was not easy, but we endured. People were blatantly racist in other parts of Crown Heights back then and not half as open minded as some are today. We were called ugly names. The n-word, and also schvartzeh, Brillo head, Vulteh Chayeh. The children refused to sit next to us on the bus rides home. We were often spit on and mistreated. I’d be lying if I stated that we did not have difficulty in certain community spaces, but we were loved at home and on our block.

What’s the biggest misconception or misreporting of events?

A pogrom is an attack on Jews simply because they are Jews. No one was chanting “Jesus killer” or “kill the Torah observers” that night. People were not being attacked that night because of their Torah observance — in fact, quite the opposite. Lubavitchers, for better or worse , were viewed as privileged community members with deep pockets, strong political ties, and lots of protectsia from the police at that time. Are these classic antisemitic tropes? Yes. But that doesn’t mean there wasn’t a kernel of truth to them or that people didn’t believe them.

How were Black Jews perceived?

I don’t think we were hated for being Jewish either. That night, Black Jews drove through Crown Heights, in their kippot, looking very Jewish, while Lubavitchers could not. So why weren’t we attacked? Maybe because Black folk weren’t concerned about our Judaism or our Torah observance that night.

Absolutely not. My parents actually drove their Lubavitch neighbors to and from the hospital that night, covered in blankets on the backseat of our black Fleetwood Brougham Cadillac. With a Chitas on the dash!

That’s amazing. Was their bravery acknowledged?

No. My parents were never publicly recognized for their bravery that night. Non-Jewish Black folk like Peter Noel and others were celebrated for their heroism but my parents were never acknowledged. My parents risked their lives that night hiding Jewish friends in the back of their car, and while those same people received a hefty settlement from the city for the trauma they endured, my parents received nothing, not even a thank you from our fellow community members. Last year, after my mother, of blessed memory, passed away, I asked a member of that family to confirm his experience that night. He eventually did, but only in a private Facebook message , nothing more.

Have you talked to reporters about the incident in all these years?

Repeatedly. But few seemed willing to change the anti-Black narrative already circulating in the media. The focus remained trained exclusively on “antisemitism” not at all on the traumatic experiences Black and Black Jewish families had endured in the community for decades.

Over the years, I have spoken with several Jewish journalists who have written stories about Yankel Rosenbaum, alav hashalom, and Crown Heights. But none that I’ve spoken to have ever interviewed Black Jews living in the area at that time. Strange. When I asked why, one journalist answered, “It just never occurred to me.” For probably the first time in my life, I was actually speechless.