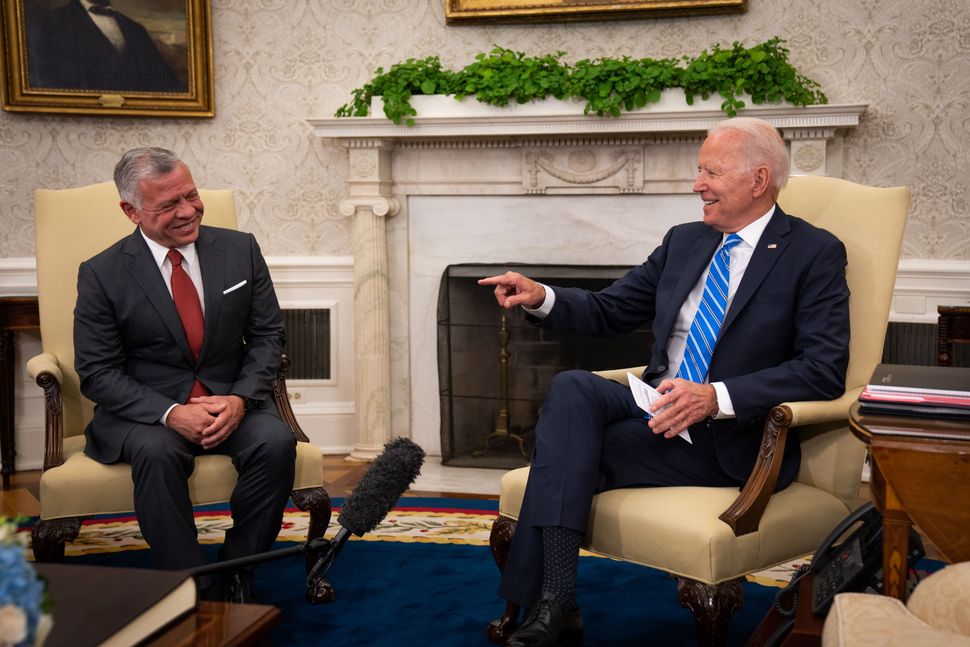 U.S. President Joe Biden meets with King Abdullah II of Jordan in the Oval Office of the White House on July 19, 2021. Image by Pool / Getty Images

It is wise that the U.S. and Israel are pursuing deeper relations with Jordan. But it is unacceptable to let the Kingdom’s tolerance for public antisemitism go unchallenged in the process.

King Abdullah II bin Al-Hussein was the first Mideast leader to be received as a visitor to the Biden White House, and Amman was Prime Minister Naftali Bennett’s first foreign destination after becoming Israel’s head of government. We have found no indication that either leader raised this issue in recent meetings.

This month marked the 20th anniversary of the terrorist attack at a Sbarro pizzeria in Jerusalem — and Jordan has unjustifiably persisted in refusing to extradite Ahlam al-Tamimi, the Palestinian terrorist responsible, to Washington, where she faces criminal prosecution.

Tamimi took the lives of 15 innocent Israelis and Americans. One of the two Americans murdered in the terrorist bombing was Malki Roth, a 15-year-old high school student. The other was Judith Greenbaum, 31, a tourist briefly visiting Israel, pregnant with her first child. A third American victim, Chana Nachenberg, remains in a coma two decades later.

Since 2017, Amman has claimed it cannot extradite Tamimi because its 1995 extradition treaty with the United States was never ratified by the Jordanian parliament.

It is beyond its disgraceful resort to such narrow legal loopholes — and that argument turns out to be spurious because the current king’s father, King Hussein, personally ratified the treaty and said so in a formal document to the State Department.

But more critically, Jordan’s leadership has never publicly condemned Tamimi or her awful deeds. It has also failed to speak out against public efforts that claim Tamimi as a Jordanian hero.

Giving Jordan a free pass for harboring the killer of American and Israeli children is unacceptable.

The Tamimi extradition issue appears not to have been raised at any of King Abdullah’s numerous official meetings in Washington last month, including separate sessions with President Biden and Secretary of State Blinken.

We see this as a missed opportunity for both sides. The Biden administration could have used this opportunity, at the moment when both sides are starting a new page in the relationship, to reinforce our values and expectations of our allies, especially as pertains to terrorism and American lives.

For his part, the king could have used the Tamimi issue — and still can — to signal to the U.S. and to his people that hostility towards Jews does not serve the national interests of Jordan, and that Israelis are not their enemy.

The Kingdom has chosen instead to facilitate Tamimi’s extraordinary celebrity status while shielding her from American justice.

Jordan also continues to publish antisemitic content in its government-published school textbooks. An ADL study made public this spring found that Jordanian texts had been teaching that “treason and the breaking of pacts are among the characteristics of the Jews,” that Zionism is racism and has no basis in historical truth, that the Jews were prophet killers and that a 1969 arson attack on Jerusalem’s Al-Aqsa Mosque by a hallucinating Christian from Australia was in reality part of a sinister plot by Israel that would seem to reveal the Jewish state’s true intentions.

Similarly disturbing messages have been aired without interference in other Jordanian settings. Consider the May 21 sermon at the King Hussein Mosque in Amman that was broadcast on Jordan’s flagship state television channel in which the preacher proclaimed: “Oh God, grant us victory over the occupying Zionists.” Or the June 2021 statement by the secretary general of Jordan’s Royal Committee for Jerusalem Affairs and amplified by Jordan’s state newswire, decrying what he called “the forged temple” in Jerusalem and accusing the Jews in Israel of greed, conspiring, barbarism, and trying to divide nations.

While serious challenges pertaining to antisemitic messages are certainly found in other Mideast countries, few of them enjoy the kind of supportive relations that Jordan has with the U.S. Nor do most of them have peace treaties with Israel.

Now that the new governments have underscored their desire for closer relations with Amman, we ask: What do you want to achieve with those relationships? Shouldn’t seriously urging Jordan to finally extradite a confessed murderer of Israeli and American children, and to end the teaching of Jewish and Israeli-hatred in Jordan’s public schools, be part of the plan?

Sharon Nazarian is ADL’s Senior Vice President for International Affairs. Arnold Roth is honorary chair of the Malki Foundation, an Israeli charity that supports families caring at home for children with extreme disabilities and named in his murdered daughter’s memory.