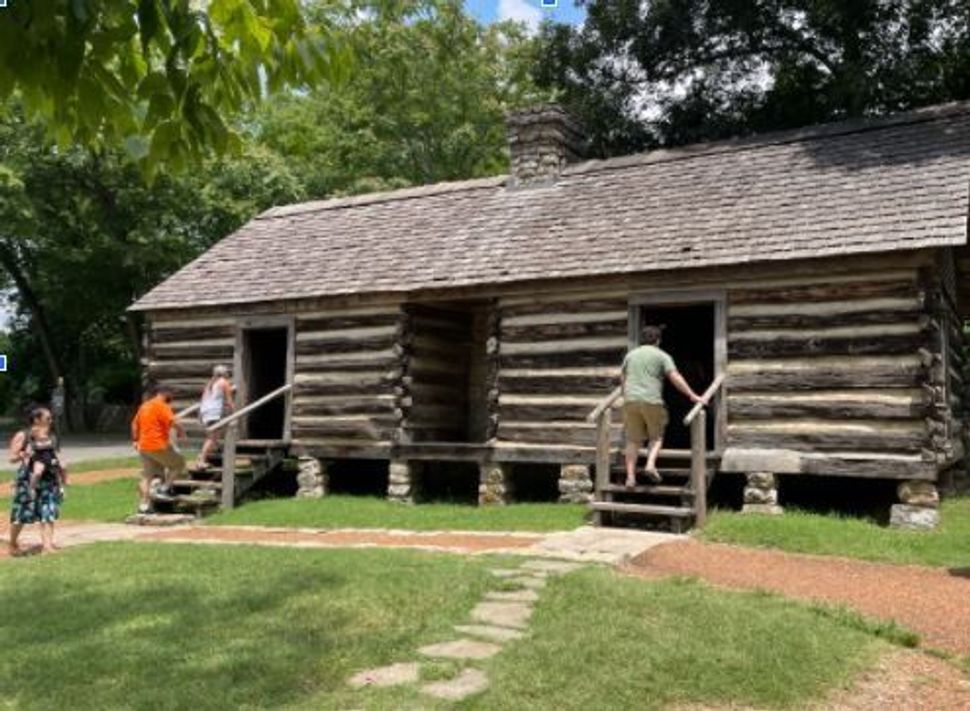 Tourists visit a slave cabin at the Belle Meade Plantation in Nashville, Tenn. The original cabins that housed 136 enslaved people before the Civil War have been torn down, and replaced by those from a different plantation. By Adi Eshman

At the Belle Meade plantation in Nashville, Tenn., you can partake in a wine tasting of Gentleman’s Red or Lady’s Cuvée. You can play a round of cornhole. And at its Coop N’ Scoop ice cream shop, you have a choice of strawberry, chocolate or their newest flavor — Krazy Kookie Dough.

But here’s a better choice: How about none of the above?

Worldwide Jewry would be justifiably outraged if someone opened an ice cream shop or held a bean bag toss on the grounds of Auschwitz. But in America’s concentration camps — its former slave plantations — tourist attractions abound. It’s beyond time to ask why.

Built in 1807, it grew to encompass 5,400 acres and enslaved 136 human beings by the outset of the Civil War. That put its owners in the top 4% of slaveholders in Tennessee, according to Brigette Jones, Belle Meade’s director of equitable partnerships.

The plantation served as a stud farm for thoroughbred horses, who were bred and reared by enslaved men, women and children. The lineages of Seabiscuit and other champions can be traced back to Belle Meade. Enslaved people served as trainers, cooks, gardeners, servants — even jockeys. In her book, “Race Horse Men,” Katherine C. Mooney documents how slaveholders would routinely starve and torture their enslaved jockeys — some as young as 8 — to ensure that they lost weight before a race. A common technique was to bury the jockeys up to their neck in horse manure to sweat off their weight.

I’d visited places of historic tragedy before, but nothing prepared me for my visit earlier this summer to Belle Meade. As a high schooler, I went on March of the Living, which brings Jewish youth to Poland and Israel. On the Poland leg of the trip, our guides, accompanied by Holocaust survivors, brought us to Auschwitz, Auschwitz-Birkenau, Majdanec and Belzec.

One of my strongest memories is seeing a Coca-Cola machine in the visitor’s center at Auschwitz. Even stranger still, the restrooms were coin-operated, and an Auschwitz survivor had to ask me for a couple coins to use it.

Weird, but none of these small modern conveniences took away from the gravity of the experience. Jewish groups have long been protective over what gets built in and even around Auschwitz and other camps.

But at Belle Meade, you can opt to spend the day touring the master’s quarters, or try the $50-per-person bourbon tasting. Ice cream and bourbon aside, they also offer the “Journey to Jubilee” tour that digs deeply and, in fact, thoughtfully into the plantation’s true history. Jones and some members of the plantation’s board are trying to dispel any preconceived notions visitors may have that enslaved people were happier before Emancipation. They also explore the oppression and violence the emancipated continued to face after the Civil War.

Jones’ research on Belle Meade shows that America’s racial oppression did not end with emanicipation, and that segregation, lynching, voter suppression and mass incarceration have continued the Civil War 154 years after it was supposed to have ended.

But telling the truth can’t and shouldn’t be optional at America’s plantations. I understand there are economic realities behind the bourbon tastings, but they shouldn’t come at the cost of effacing history.

If you want to find out more than just what color frocks the masters wore at America’s plantations, there aren’t many choices. An initiative called Tourism RESET visited four plantation museums and observed 35 tours. In all but one, reported the Guardian, observers found “furnishings, family history, architecture and gardens are mentioned more often than slavery.”

In an interview with the Forward, Brigette Jones told how most plantation museums discuss slavery. “Tours have been changing over the last couple years,” she said. “But many of them revolve around a top-down narrative, seeing the plantation through the eyes of the enslavers instead through the eyes of the enslaved. This perspective only benefits the slaveholder, and reinforces the idea that the enslaved were in a weird, loving relationship with their masters.”

The exceptions prove the rule. At Monticello, Thomas Jefferson’s home/plantation, visitors can take a tour that details some inconvenient truths about the Founding Father’s enslaved people. And in Louisiana, the Whitney Plantation is one of just two plantation museums — the other being McLeod Plantation in South Carolina — that only offers tours on its history of enslavement and exploitation.

Yes, such honest accountings can be bad for business. In 2019, a visitor left a Trip Advisor review of the Whitney Plantation.

“The tour guide was confusing and rambled on about names. Then proceeded to talk about reparations which are political and not appropriate for the tour. Give us facts and leave out your opinions.”

Who would leave Auschwitz complaining about whether Jews deserved compensation? Why should plantations take a different approach?

At Belle Meade, Jones acknowledged that the wine tasting, ice cream shop, wedding receptions and other blatantly commercial features and events made her uncomfortable. The visitors who only come without getting this information aren’t seeing the full picture of what happened at Belle Meade, she said. “All plantation museums should only focus on the history of slavery. But without ice cream shops and weddings, we can’t continue doing these tours. We want to educate people and talk about slavery, but these weddings — especiually during COVID — help us keep the lights on.”

Given the unflinching forcefulness that American Jews have applied to Holocaust education, we are in a unique position to push these plantations to pass down knowledge about the horrors of slavery from one generation to the next. A few organizations, like Facing History and Ourselves provide resources to teachers and students around issues of racism and anti-Semitism.

A 2019 study of Los Angeles Jewry found that for 95% of Jews, including millenials and GenXers, remembering the Holocaust is “essential or important” to their Jewish identity. That’s not an accident: that’s the result of decades of education, activism and funding priorities. That’s making certain that concentration camps and other sites of Nazi atrocities don’t become memory holes or theme parks.

“When people come to Holocuast museums, they expect to cry. They don’t come looking for a happy experience. And yet when people go to plantations, they expect to find a happy-go-lucky place,” Jones said. “Yet these are places where people were held captive, beaten and tortured. There’s a mental block that people have when they visit.”

Those beautiful genteel plantations were America’s concentration camps. There’s not enough ice cream in the world to sweeten that truth. And that includes Krazy Kookie Kreme — or whatever that flavor was.