New Hulu series ‘Dopesick’ reveals the evils of the Sackler family, but hides the real fight 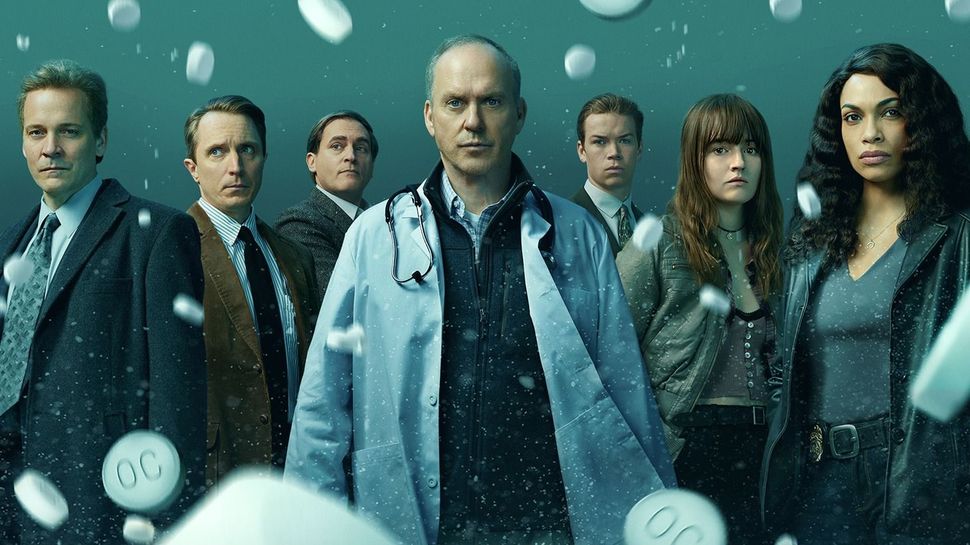 The cast of “Dopesick,” a new Hulu miniseries on the Sackler family and the fight to hold them accountable for the OxyContin-fuelled opioid epidemic. Courtesy of Hulu

I’ve lost too many people to opioids to be surprised by anything I saw in “Dopesick.”

The eight episode miniseries by Hulu, premiering Oct. 13, dramatizes the criminally deceptive marketing behind OxyContin, Purdue Pharma and the Sackler Family and what led to a substance abuse crisis affecting millions of Americans. It is loosely based on the 2018 bestselling book by Beth Macy, “Dopesick: Dealers, Doctors and the Drug Company that Addicted America.”

Watching, I can’t help but wonder who “Dopesick” is for, and more precisely, what we are supposed to feel while watching, given the hard truths we know.

Though the series focuses on the pursuit of justice, the Sacklers are not on the road to being held accountable — or expressing remorse. They have their billions and are not in jail. The now-bankrupt Purdue Pharma, having been converted into a fund to channel settlement monies to states, is still a bloated corpse spreading decay that American taxpayers must now shoulder, as $4.5 billion is nowhere near enough to combat the opioid epidemic. And this past year, more than 70,000 Americans died from opioid overdoses.

The Greek roots of the word “catharsis” mean a “purging or purification of emotions,” an irony bitterly apparent in the scenes of sweaty vomiting and desperate opioid withdrawal that are the titular basis of the show. This series, like opioids themselves, sends us into a catharsis that can never truly be complete.

The creators of “Dopesick” cannot be blamed for the release of their series coming after the news that the Sacklers and all of their associated companies and trusts will avoid criminal liability. But watching, I knew that the family behind the crisis, the Sacklers who founded Purdue Pharma, had won sweeping immunity on Sept. 1, 2021 in a complex bankruptcy hearing in White Plains, New York.

Unlike the Sackler family, those who battle addiction face consequences every day. The Contin in OxyContin stands for continuous; no one survives addiction unscathed. The toxic shame that comes with battling substance abuse is sometimes even more corrosive than the pearl of oxycodone hidden beneath the delayed release coating Purdue touted as addict-proof. This is one of the few things portrayed effectively by this series, which often lurches between awkward and affecting.

The creators know that they have a lot to cover, and work very diligently to convince the viewers they have empathy to spare for every character, even as the show jumps breathlessly between timelines and individuals. Critically, they are even mindful of the attention and sympathy the opioid crisis has received compared to crack cocaine, with a lawyer loudly remarking that “once white kids in suburbs started dying, then people gave a shit.”

Many contemporary trial series operate by blowing wide-open the ins and outs of the case and making the hunt for a guilty verdict as exciting as an action film. They take us through each piece of evidence gathered, and we cheer the “aha” moments when the crafty lawyer finds a way to break the case. “Dopesick” does this part of the storytelling quite effectively, and the writers tease out for us the most explosive nuggets of criminality hidden within reams of legal records.

As a journalist and avid “Law & Order” fan, I enjoyed the investigative tidbits “Dopesick” shares with us. But I continue to question the impact this series can have, and furthermore, the characters it chooses to center.

If “Dopesick” was supposed to provide a window into Sackler machinations and the pushback, I would have enjoyed seeing the show tackle Nan Goldin’s advocacy through Prescription Addiction Intervention Now, the organization the artist and former OxyContin addict founded in an effort to force the Sacklers to take responsibility for the opioid crisis.

Goldin’s memorable public protests — particularly one staged at the Guggenheim in Feb. 2019, during which hundreds of white prescription slips for OxyContin rained down into the rotunda bearing choice quotes from the Sacklers — pushed the conversation about Purdue Pharma into the front pages and the Guggenheim to stop accepting Sackler donations.

I was also curious to see more about successful movements to remove the Sackler name from buildings or refuse Sackler philanthropy, none of which are mentioned in the series. I also wanted to see more creative activism, like the massive spoon made by artist Domenic Esposito that he placed at the Purdue Pharma headquarters.

Instead, the narrative drums toward a showdown in the formal halls of justice — a story that ultimately rings hollow, given what we know.

In the course of my own reporting, I spoke to current and former students of an institution that still bears the Sackler name — the Sackler School of Medicine at Tel Aviv University. Student-led efforts to remove the name have been tepid at best, yet I continued to hear from medical students who wished to speak to me of their discomfort with the Sackler name — off the record.

The students understandably feared that any vocal activism would affect their future placement in residencies, yet another example of the difficulty in bringing perpetrators to justice. I worry that the potential catharsis a viewer will experience in “Dopesick” will make us feel as if our work is done, and bring further passivity in the face of such naked power and greed.

But an $11 billion fortune is quite a bit of blood money, and the Sacklers are using it to soothe the embarrassment of being the most hated family in America quite effectively.

The Sackler name has been removed from a major wing at the Louvre, five different buildings at Tufts University, and museums including the London Tate, Metropolitan Museum of Art and the Guggenheim have all pledged to no longer accept Sackler money. Perhaps “Dopesick” will inspire more institutions to divest publicly from the Sackler family. However, those who have suffered the most will never be able to hold the family truly accountable.

Finishing “Dopesick,” I was reminded of Rabbi Eliyahu Schusterman’s personal essay for the Forward on losing a congregant to addiction. In it, he confessed that he was ignorant of the opioid crisis until an 18-year-old member of his Atlanta synagogue died of an overdose.

“Though it’s uncomfortable, we need to start talking about addiction more openly in our Jewish communities — and start taking meaningful steps to help those in pain truly heal,” he wrote.

There is a brief moment, late in the series, when a character receives their first methadone treatment in the process of their recovery from OxyContin. As they sit under observation in the clinic’s waiting room, they notice the waiting room is filled with grandparents, children, young people, white people, Black people — an entire community present.

For a beat, they are together in quiet unity, born of a solidarity in bravely trying to heal from a disease that takes on average eight years to stick.

It is one of the few moments of grace in “Dopesick,” and the only scene that brought me hope. For real catharsis happens in moments of seeming imperfection, like a methadone clinic, where someone realizes for the first time that they are not alone.

New Hulu series ‘Dopesick’ reveals the evils of the Sackler family, but hides the real fight