I grew up in Gaza schools. The textbooks aren’t what’s stoking violence and hatred of Israel. 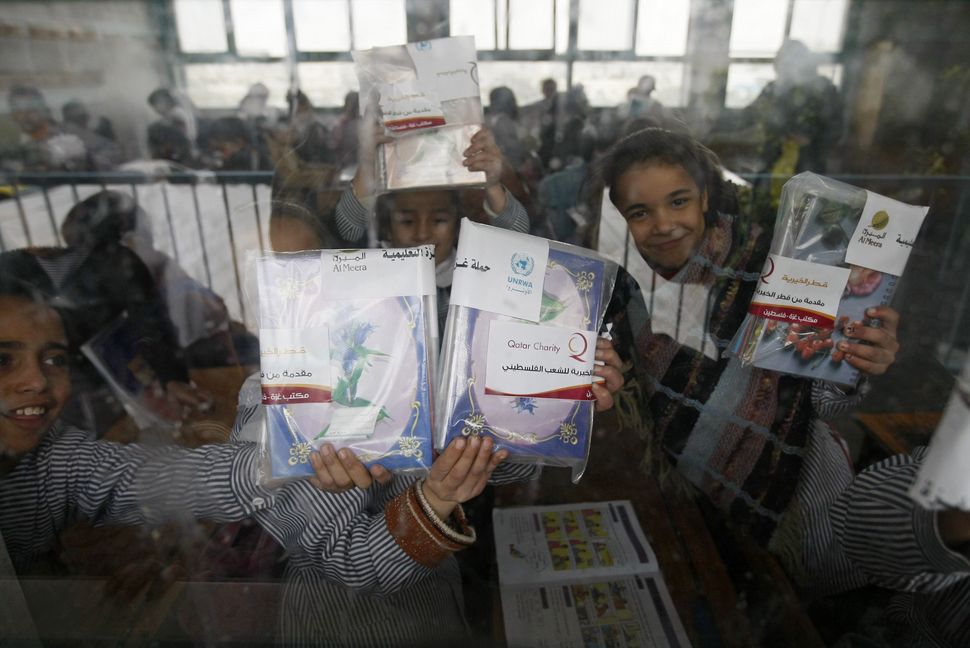 Palestinian schoolgirls show textbooks offered by the Qatar Charity at their school run by the UN Relief and Works Agency (UNRWA) in Beit Lahia in the northern Gaza Strip on December 16, 2009. The main UNRWA centre and several schools were destroyed by Israeli bombing during last winter’s three-week war, which killed some 1,400 Palestinians and flattened large areas of the Gaza Strip By Mohammed Abed / AFP / Getty Images

Growing up in Gaza, I studied in UNRWA schools from first to ninth grade. I owe a great debt to my school, teachers and the Palestinian curriculum for making me into the person I am today — an ardent believer in nonviolence and the right of both Palestinians and Israelis to lead secure, prosperous and dignified lives.

Recently, the claim that the textbooks in Palestinians schools promote violence and hatred of Israelis has gained traction in Europe, with the European Parliament scheduled to vote on this issue later this month. Rather than spur meaningful dialogue and change, this debate puts Palestinians on the defensive. But more than this, it presumes that we must erase our culture, experiences and history to make others more comfortable.

Scrutinizing Palestinian textbooks alone, at a time where Israel’s government is explicitly saying no to peace negotiations or ending occupation, is a deflection of responsibility. Pouring EU resources into a one-sided investigation rather than addressing more pressing violations and abuses is an absurd way to hide European idleness vis-à-vis Israel and avoid serious peacemaking.

The discourse around these textbooks themselves condescendingly depicts Palestinians as malleable pawns with no agency. And it also implies that, if only Palestinian students were counter-indoctrinated into unrequitedly loving our occupiers — the soldiers who raid our towns and humiliate us at checkpoints and the settlers who only last week launched a pogrom against Palestinian villages — then our suffering would disappear.

But rewriting our textbooks will not keep Israel’s government from building settlements, cause the separation wall to collapse or end the occupation. Palestinians are resentful of Israel because of our lived experiences and the myriad layers of oppression we are subjected to, not because we are brainwashed by school books.

Palestinians are intimately familiar with such deflections and gaslighting. When we call for freedom and equality, we’re told there is “no partner for peace.” When we demand a dignified and normal life, we’re told we must fulfill Israel’s endless security concerns first. When we scream our lungs out to heaven in futility that our lives have been rendered futureless and unlivable, we’re told that our suffering is self-inflicted because we hate Israel.

These excuses are pretexts to avoid peace rather than advance it.

Critics of Palestinian textbooks also imply that learning our history is a threat. Our textbooks teach us about our pre-Nakba national history in the entirety of historic Palestine — the enchanting beauty of Yaffo, Haifa, the Galilee, Gaza and Nablus.

But celebrating our history isn’t an incitement to destroying Israel any more than Israeli school books teaching Jewish biblical heritage in Beit El is an incitement against Palestinians.

Rewriting Palestinian textbooks won’t change our feelings and lived experiences with the occupation. School Books can reinforce existing beliefs and attitudes, but they cannot as easily reshape them.

The Palestinian curriculum mirrors our reality and perspective, echoing rather than fabricating our national identity and narrative. If that narrative is incompatible with Israel’s, we should call for reciprocal, simultaneous and equal efforts to bring both narratives closer together.

For instance, Palestinian schoolbooks could more intimately discuss the Holocaust, the persecution of our Jewish sisters and brothers around the world, the 1929 Hebron massacre and offer more nuanced reflections on when armed resistance could go too far.

Israeli textbooks could in turn teach the history of the Nakba, the Deir Yassin Massacre, the Palestinian villages that were destroyed in the making of Israel, the occupation, settlements, and settler violence to know the pain we have caused each other and the suffering we could prevent if we come together.

If the past reflected in those schoolbooks is bleak, the present and future are still in our hands to write; imagine a new chapter written in the Palestinian and Israeli narratives in which Israel and Palestine choose peace over war, prosperity over destruction and equal coexistence over hatred.

I grew up in Gaza schools. The textbooks aren’t what’s stoking violence and hatred of Israel.