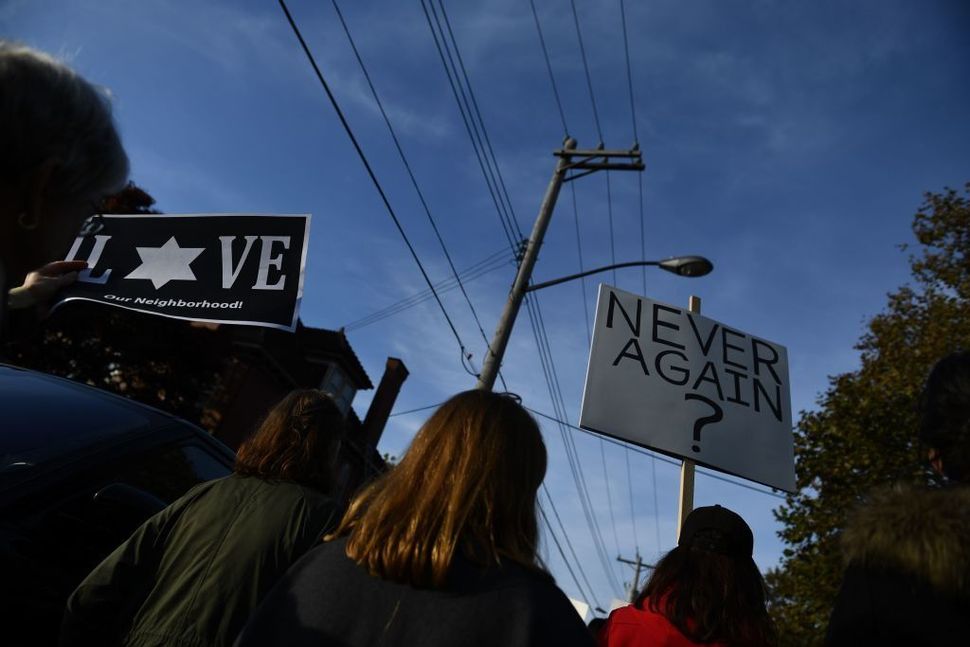 People gather to protest the US President Donald Trump as he visits Tree of Life Congregation on Oct. 30, 2018, in the wake of a mass shooting that killed 11 people. By Brendan Smialowski/AFP via Getty Images

On Oct. 27, 2018, a white supremacist opened fire in the Tree of Life synagogue in Pittsburgh during Shabbat services, killing eleven people and injuring two. Three years later, in the beginning of October, Pittsburgh hosted the three-day Eradicate Hate Global Summit, presented in honor of the members of our community murdered and wounded in the 2018 attack.

Everyone should be able to support a conference on combating antisemitism and hate. Despite its framing as a nonpartisan affair, the event was deeply political — and dangerous.

The three of us are involved in the Tree of Life congregations. We respectively have attended their services, grown up in the congregation and taught in its religious school.
As Jews with strong ties to Pittsburgh and opposing systems of oppression, we feel obligated to speak against harm perpetuated under the guise of fighting antisemitism.

Many summit speakers talked about fighting antisemitism, but the conference itself took us in the wrong direction. We as a Jewish community must resist attempts to co-opt and misrepresent antisemitism, to turn our tragedies into a political tool to increase state powers and promote right-wing ideology.

The summit’s organizer Laura Ellsworth, who is not Jewish, works for a high-powered law firm that has among its clients Fox News and Walmart, and recently litigated Trump’s attempts to overturn the 2020 election.

Ellsworth announced that her first call when organizing the event was to Tom Ridge, former Republican governor of Pennsylvania and the first head of the Department of Homeland Security.

DHS has faced a torrent of criticism since then-president George W Bush created it in 2002, and rampant abuses and misconduct have since come to light. Bush himself was a keynote speaker at the summit, as were Tom Ridge and current Secretary of Homeland Security, Alejandro Mayorkas.

DHS’s treatment of undocumented people — Immigration and Customs Enforcement is a DHS agency — outraged many Jews, who saw in the racist rhetoric and dehumanizing treatment of immigrants reflections of our own painful histories. In recent years, Jewish activists organized and took inspiring action alongside immigrants and other communities to support those suffering from state abuses.

Anti-immigrant hatred inspired the perpetrator of the Pittsburgh synagogue shooting. The perpetrator attacked the Tree of Life congregations in part because of those congregations’ support for immigrants and refugees. He believed Jews were facilitating mass immigration to destroy white America. He did not create this idea alone; it is a common and historical antisemitic conspiracy theory currently promoted by the far-right.

Antisemitic violence has long been connected to xenophobic language and policies toward immigrants. So the praise heaped on DHS at a summit organized in memory of the Tree of Life victims was disturbing. One speaker noted that the agency contributed to almost every panel.

In addition to fortifying the security state as the solution to our problems, it felt as though the Eradicate Hate Summit was being used as an opportunity to whitewash state violence.

Law enforcement agencies nationwide continue to treat people of color less fairly than white Americans, and police are routinely violent toward Black people. Police in the United States kill at least a thousand civilians a year, disproportionately Black people, and recent research found that police killings have been vastly undercounted.

Days before the summit, James Rogers, a Black Pittsburgher, was tased to death by police. The summit itself took place after what would have been George Floyd’s 48th birthday.

In light of the documented threats that police pose to communities of color, it is clear that framing policing as the solution to antisemitism will harm these communities. But the Eradicate Hate Global Summit only presented law enforcement as a solution to hate, rather than a system deeply entangled in it.

The summit did not present antisemitism, white supremacy, xenophobia, and state violence as interconnected. Discussing these separately and without context allows the promotion of “non-political” solutions to deeply political problems. If we are outraged by the dehumanizing treatment of immigrants, if we are outraged by police violence against Black communities and communities of color, we cannot allow an attack on our community to be used in service of whitewashing those state atrocities against others.

The Tree of Life massacre shocked the Pittsburgh Jewish community and Jewish communities around the country. Many of us are still processing our trauma. Voices from the political right immediately sought to use our pain and fear to reinforce their own political agendas.

But there was also another infinitely more hopeful and powerful response. In the days after the attack, Jews and allies from other communities came together to declare that none of our safety can arise in isolation. In Pittsburgh and around the country we gathered in public to mourn and commit to solidarity across marginalized communities.

We understand the impulse to support high-profile responses like this summit. We as Jews have complex histories of trauma. We seek safety, and many of us have been taught that it comes from the state.

But our same histories teach us that the support of the powerful is often conditional; reliant on assimilation, and Jews’ ability to benefit rulers.

This context makes it deeply uncomfortable that a high-power summit against hate ignored history and used the memory of an antisemitic attack to gather elites so they could address our security concerns through more state surveillance and power.

Opposing hate is important, but if we aren’t willing to confront the ways white supremacy informed and guided the founding of this country, and how it continues to influence the development of our institutions, how can we hope to truly seek our safety?

We need to examine the intertwined relationships between white supremacy, antisemitism, and other systems of oppression in order to truly understand the problem. Doing so leads us to the lasting message of this tragedy: that our safety comes from solidarity with one another.

Even in the aftermath of tragedy, maybe especially then, we have a responsibility to interrogate how our personal and collective actions impact the safety of others. We need the entire Jewish community to stand up against the cooptation of our tragedies for the gains of oppressive and exploitative institutions. In the memory of those we’ve lost to antisemitic violence, let us recommit to our liberation and the liberation of all oppressed peoples together, and may their memory be a blessing.

Ami Weintraub (he/they) is a teacher, organizer and writer. They are a Rabbinical student in the Aleph Ordination Program. Ami founded and runs Ratzon: Center for Healing and Resistance and teaches in Hebrew school in Pittsburgh.

Ben Case is an organizer, researcher, and writer. He helped found IfNotNow Pittsburgh and JOLT. Case is a postdoctoral scholar at the Center for Work and Democracy and has a PhD in sociology from the University of Pittsburgh.

Jess Gold is an educator and organizer from Pittsburgh, PA. Gold serves on the advisory board of Ratzon: Center for Healing and Resistance and organizes with Jews Organizing for Liberation and Transformation (JOLT), a loosely affiliated group of liberation-minded Pittsburgh Jews. She is the Program Manager for a local nonprofit organization, and when she’s not working, you can find her baking challah and attempting to perfect her seitan brisket recipe.