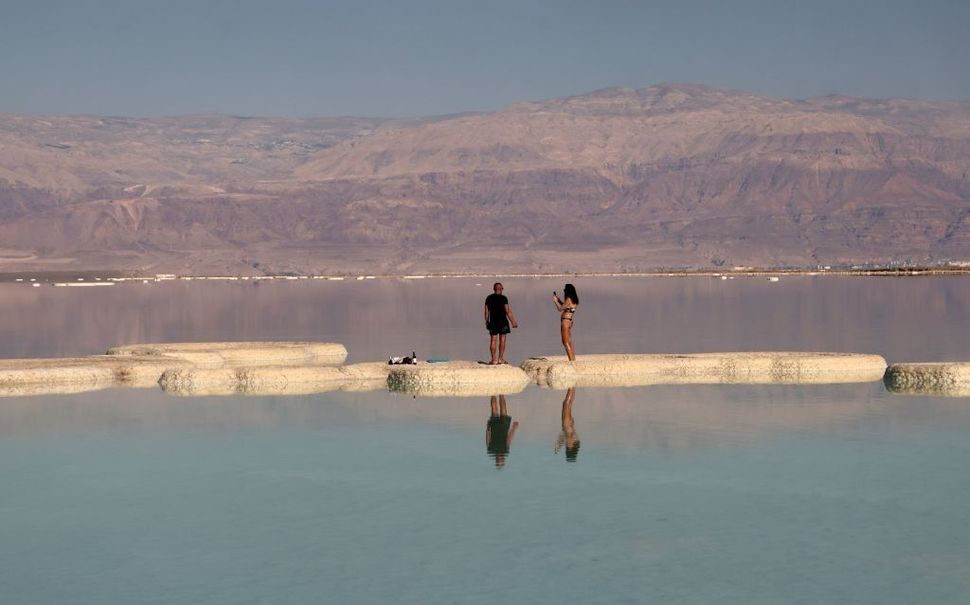 A couple walk on a salt island formed on the Dead Sea in the Israeli resort town of Ein Bokek on Mar. 27, 2021. By EMMANUEL DUNAND/AFP via Getty Images

This experience of both recognizing the ingrained and persistent racism of this country and committing to building a better future likely does not strike many as a paradox. However, when it comes to Israel, conversations too often assume a false dichotomy in which one must choose between caring about Israelis or Palestinians, and either supporting Israel or opposing occupation.

A recent New York Times Magazine story reinforced this disingenuous choice. The students interviewed in the piece are thoughtful, nuanced and engaged with deep questions about the future of the Jewish state. But reducing their positions to either supporting Israel or opposing occupation, as the author does throughout, erases the reality that for many, love of Israel demands working for the human rights of everyone under its jurisdiction — just like love for the United States compels many to fight racism here.

As the article notes, many rabbinical and cantorial students come face to face with occupation for the first time through T’ruah, which runs a yearlong human rights program for American rabbinical and cantorial students studying in Jerusalem. Each year, more than 80% of future rabbis and cantors spending the academic year in Israel, as required by the major non-Orthodox seminaries, take part in the T’ruah program.

Over the course of a year, we show them human rights challenges on the ground and introduce them to Israeli and Palestinian civil society leaders working for a different future. They visit Hebron with Breaking the Silence, an organization of Israeli veterans who testify about their experiences enforcing the occupation, to see for themselves how settlement there has resulted in evictions and violence against Palestinians. They plant saplings in the South Hebron Hills with Combatants for Peace, a group of former Israeli and Palestinian combatants who advocate nonviolent resolution to the conflict, in order to replace trees uprooted by settlers. They visit Mizrahi Jewish activists in Haifa, Palestinian residents of East Jerusalem and Bedouin Israeli citizens in the Negev.

In asserting that “A reliable subcurrent in American students’ conversions away from the ardent Zionism of their youth is firsthand confrontation with reality in the West Bank,” the Times article misses an essential truth about these experiences. Yes, the future clergy who participate in our programs come away upset and angry about the reality on the ground in Israel and the occupied Palestinian territories. But crucially, in every one of these programs, they meet Israeli and Palestinian human rights and civil society leaders who are choosing hope over despair and working for a better future for their own families.

It has been especially important to these students to meet Israeli leaders who are devoting their lives to ending the occupation precisely because they love their country — just as patriotic Americans can and should devote themselves to fighting racism, and to coming to terms with the ugly parts of our country’s history and present. These meetings, along with deep dives into Jewish texts and traditions, help build a real connection with Israel, a vision of a future in which Israelis and Palestinians enjoy human rights, and the necessary capacity to be moral leaders who stand for the human rights of everyone in the region.

My own experience illustrates the ways in which encounters with occupation can precipitate an even deeper connection with Israel. In Sept. 2000, I arrived in Jerusalem for my third year of rabbinical studies at the Jewish Theological Seminary. The Second Intifada had begun just days earlier. Planes breaking the sound barrier, bombs exploding in cafes and buses, and military attacks on Bethlehem became the background noise for our Talmud study. We feared for our safety. At the same time, I began to learn about the experience of Palestinians facing closures of entire villages, shelling attacks and the ongoing violence of occupation.

The following year, during a JTS mission to Israel, a classmate and I organized a day for our classmates in East Jerusalem, in partnership with B’Tselem, the Israeli Information Center for Human Rights in the Occupied Territories. We visited a refugee camp and met a Palestinian family whose home had been demolished repeatedly because of the near impossibility for East Jerusalem residents of acquiring building permits.

I could have walked to this neighborhood from the apartment where I lived the previous year. And yet, it felt like another country. Before that day I might have said that I opposed occupation, but after that visit I understood what occupation meant on a day-to-day basis.

I could easily have walked away. But that would have meant abandoning hope. It would have meant deciding that the country where half the world’s Jewish population lives isn’t worth saving. And it would have meant turning my back on the brave Israeli and Palestinian activists who are fighting every day to end the occupation and to ensure basic freedoms for everyone.

It’s curious that, when it comes to Israel, too many assume that one cannot be deeply committed to the country, while also intensely opposed to occupation. As an American citizen, I am painfully aware that my own country was founded on the genocide of Native Americans. I know that we are still living with the brutal legacy of slavery in the ongoing racism built into too many of our institutions and policies. And yet, this knowledge makes me even more committed to building a multiracial, multiethnic society in the United States with equity at its core.

Similarly, anyone who cares about Israel must confront the most painful parts of its past and present. This includes acknowledging the Nakba, (the Arabic word for “catastrophe,”) in which some 700,000 Palestinians became refugees upon the creation of the state of Israel, the ongoing structural discrimination against Palestinian citizens of Israel, and the military occupation of Palestinian noncitizens in the West Bank, East Jerusalem, and Gaza. Confronting these realities need not mean abandoning Israel or questioning its validity — but it does force us to take responsibility for its future.

Over the past nine years, more than 200 rabbinical and cantorial students have participated in T’ruah’s Year in Israel program. They tell us that they are not stepping away from Israel, but rather guiding their communities to a deeper connection with Israel. That connection is not one of uncritical devotion, but instead takes as a given that those who care about the future of Israel must also work for Palestinians to have the same human rights, including the right to self-determination, that we Jews claim for ourselves.