Alex Edelman crashed a white supremacist meeting. It left him grappling with his own Jewish identity 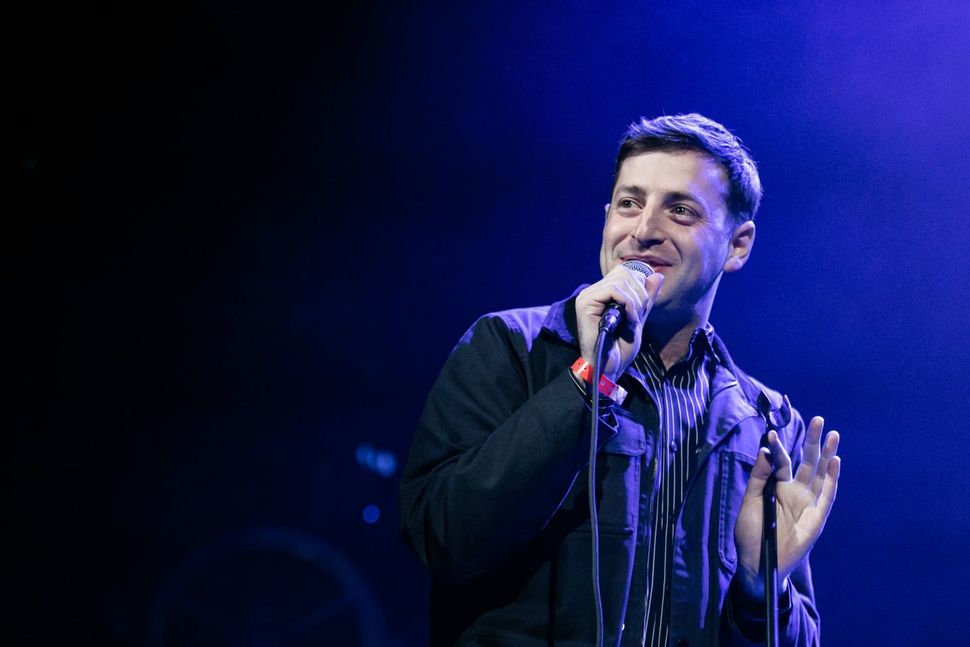 Alex Edelman’s new solo show, “Just For Us,” opens with a re-enactment of a white supremacist meeting.

As he describes the Queens apartment in which he attended a 2017 gathering of neo-Nazis, he gets the audience laughing at both white supremacist “civility” and at the fact that he ended up being more talkative than two-thirds of the attendees.

In a recent conversation, Edelman told me that the show, which premiered at the Melbourne International Comedy Festival in 2018 and just made its way to the U.S. on Dec. 6, is the result of him “putting all of my Jewish chips on the table.” But watching the highly-polished comedian stay largely within his comfort zone, I’m left wondering how true that really is.

On stage, Edelman’s tone can soar from sheepish to bombastic. In person, he is thoughtful and solicitous. During a recent Friday interview, he began by pointing out all of the rainbows that a well-placed prism in his window refracted onto his face, and apologizing for making me seasick as he walked with his laptop while he looked for a charger. By the end of our 30-minute conversation, we were comparing our favorite comedians and Torah commentaries while Edelman scanned his bookshelf for titles I might like.

Edelman grew up in Boston (“a really racist part of Boston … called Boston”) in a Modern Orthodox home. He started doing stand-up in seventh grade, and in 2014, his first solo show, “Millennial,” won Best Newcomer at the Edinburgh Fringe Festival. He’s been a guest on late- night shows and most recently produced “Saturday Night Seder” during the first pandemic Passover, a theatrical and comedic triumph featuring sketches and musical performances from the likes of Bette Midler and Jason Alexander that raised over $3.5 million for the Centers for Disease Control.

I first saw Edelman perform in Feb. of 2018 on “Conan.” He introduced himself as an Orthodox Jew, adding that “I’ve tried cocaine, but I’ve never tried bacon.”

While Jewish comedians often talk about religious aspects of their Judaism, it is often from a distance, with jokes about how no one can read Hebrew and how boring synagogue was growing up. There is a whisper of shame hidden within the desire to fully shed any trace of religious sentimentality, and what made Edelman’s comedy so appealing to me was that in contrast, he didn’t keep his religious Jewish identity at arms length — he embraced it. 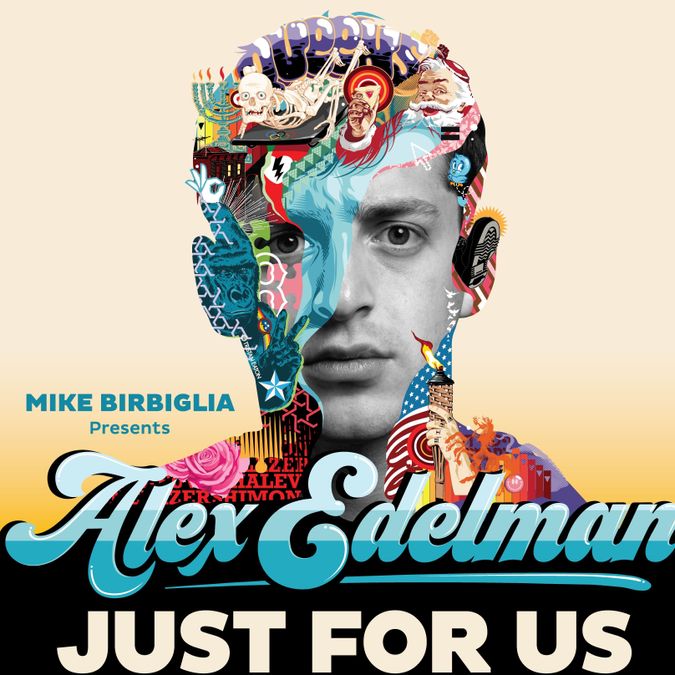 It was therefore puzzling in our Zoom conversation to hear that making a show centered around his Jewish identity was the scariest part of making “Just For Us” for Edelman.

“I’ve touched on it in superficial ways, but I always knew that there were ways to definitely go deeper on my identity. So actually investing in that is something that I’m still a little uneasy about. I’m still cautious about revealing how I feel about my Judaism, about worrying about being not Jewish enough or being too Jewish.”

I shared my surprise that he ever experienced feeling not Jewish enough, given his yeshiva education and Orthodox upbringing.

Alex laughed. “Isn’t it interesting how our environments dictate how we feel? In a room of white nationalists, I’m plenty Jewish, but in a room of Hasidic Jews … I’m Episcopalian.”

This conditional nature of identity, both of Jewishness and whiteness, forms the thematic backbone of “Just For Us.” Edelman deftly picks apart the innate absurdity of the concept of race, and how arbitrary the concept of “whiteness” is. In particular, the question of whether or not Jews are white, and how much that is dictated by others, is something Edelman is still wrestling with, even after sitting with neo-Nazis.

“I have a joke that goes: ‘If you don’t like white people, Jews are the whitest possible people in the world. If you think being white is awesome, then Jews are-absolutely-not-white-never-been-white. So that’s really what we call a lose-lose situation.’”

Given the events that have transpired since the show’s original launch — the Jan. 6 insurrection, the Tree of Life massacre, and the general increase in fear for Jewish Americans — I was surprised that Edelman’s latest show did not address what being Jewish in 2021 America, this lose-lose situation, feels like more directly.

I struggled to reconcile this Alex Edelman with the one I heard in a May 2021 episode of his BBC show “Peer Group.” Titled “Dead Jews,” the episode is a rigorous, insightful and vulnerable examination of how it feels to be an Ashkenazi Jew in the United States, and in it, Edelman comes across as noticeably more attuned to his raw comedic voice. He delivers one monologue in particular on fawning Billy Graham acolytes in Pittsburgh who emerged after the massacre at the Tree of Life synagogue; the bit was such a blistering and hilarious excoriation of Evangelical antisemitism that I applauded to an empty apartment.

Perhaps “Just For Us,” which contains a lot of Edelman’s older material, is a grappling with the comedian’s past work rather than a reflection of his (Jewish) present.

“I know that I have passing privilege, that’s for sure,” Edelman told me when I asked about what he had learned about his own whiteness from the experience. “I can pass as a white person, I know that, although some people look at me and instantly know I’m Jewish.”

Though charming and gregarious, Edelman was also guarded in our conversations, particularly in moments when we discussed how Jews would think about his show. When I asked if he was worried about all the different opinions Jews would have upon seeing it, he quickly answered that the only Jew whose opinion on “Just For Us” mattered to him was his own.

In “Just For Us,” Edelman makes clear that he is only speaking for one Jew — himself.

But there are many different Jews in Alex Edelman. Certain moments in “Just For Us” belied a comic who itches to share more yet is cautious not to reveal too much. “I don’t know that people have the facilities to plumb their own depths in the same way they think they might be able to,” he demurred.

I keep thinking about a joke in “Just For Us” where Edelman describes what it was like to grow up in a religious environment that is constantly balancing traditionalism and modernity. The joke goes that if he had been raised secular he probably would identify as bisexual, but since he was raised religious, “I’m straight with some secrets.” Edelman acknowledged that jokes like those might be more of the focus of future shows, and it struck me that maybe Edelman didn’t yet trust his audience to accept him as he evolves.

It felt like an initial volley from Edelman as he continues to test, grow and explore who he is as a comic. “Just For Us” is a safe bet and surefire crowd pleaser. But behind the sharp execution and rolling laughter during the preview I attended, I could see two different Alex Edelman’s on stage: the confident performer at the top of his game, and the more uncertain artist who is both attracted to, and scared by, the greater intimacies possible in his work.

“Just For Us” is at the Cherry Lane Theatre until Jan. 8. Tickets can be purchased at https://www.justforusshow.com/

Alex Edelman crashed a white supremacist meeting. It left him grappling with his own Jewish identity