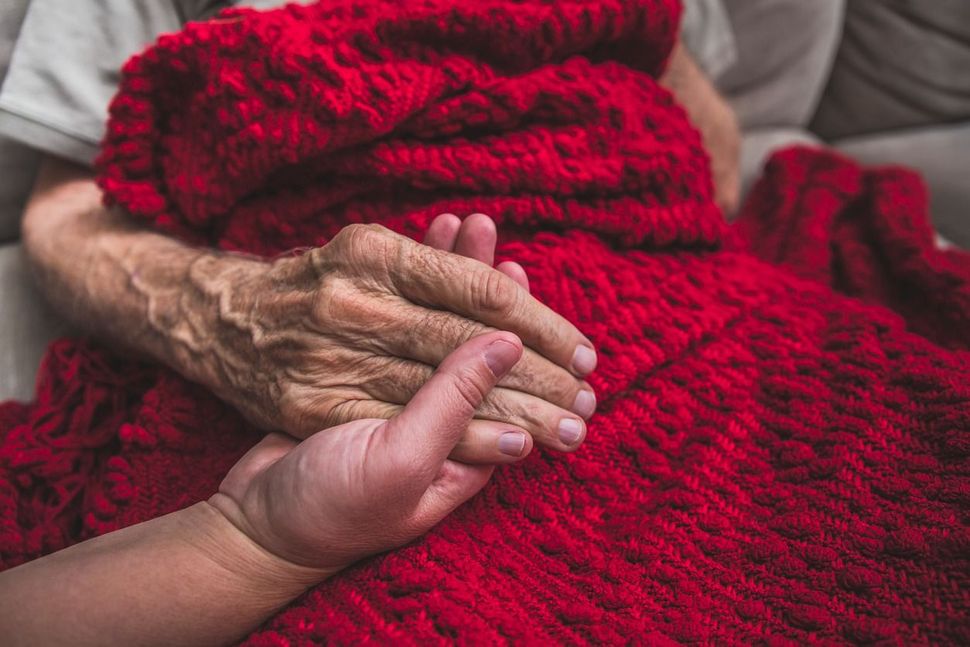 A stock photo of a hospice nurse holding the hand of an elderly male patient who is receiving hospice/palliative care. Courtesy of iStock

“Promise me you will help me die.”

My father was 92 years old. He had congestive heart failure and COPD. He was living on oxygen and a dozen medications that had kept him alive since a debilitating stroke paralyzed him forty years ago. Last year, when his doctors told him that he was dying in a matter of weeks, or months, he urgently, desperately needed to end his life on his own terms.

My phone would ring in my Brooklyn apartment.

“You have to help me die today, Rachel. I need to die today, please.”

“Rachel, please, you have to help me.”

This is how it went, day after day, sometimes several times a day, until my brother realized that in California, where they live, it was legal for my father to choose to end his own life.

And that is how I found myself at my father’s bedside in Los Angeles, supporting him as he took his own life, as his daughter and as his rabbi.

Judaism holds life sacred. In Genesis, when creating humans, G-d sees that it is very good. G-d creates us in G-d’s own image and breathes life into human beings, giving human life supreme value. The Mishnah teaches that saving one life is like saving an entire world. Pikuach nefesh (saving a life) supersedes all other mitzvot, except those forbidding murder, adultery, and idolatry. This love of life is the foundation of Jewish ethics and has led our tradition to stand firmly against any action that would lead to death.

Thus we read in the “Comprehensive Guide to Medical Halakha,” published in 1990 by Abraham S. Abraham:

“One may not hasten a death, even that of a patient who is suffering greatly and for whom there is no hope of a cure, even if the patient asks that this be done. To shorten the life of a person, even a life of agony and suffering, is forbidden.”

And in “Modern Medicine and Jewish Ethics” by Fred Rosner in 1991:

“Any positive act designed to hasten the death of the patient is equated with murder in Jewish law …. only the Creator, who bestows the gift of life, may relieve man of that life, even when it has become a burden rather than a blessing.”

I am a rabbi. I know well Judaism’s ban on euthanasia. But when I understood that my father would take his own life, I knew without a doubt that I would be by his side. He had soldiered on in this life for 92 years, uncomplaining, to be there for us and for his grandchildren. Now he wanted to leave the world, and all I could do was honor his wishes.

As this became my father’s story, I began to inquire more deeply into our tradition and found voices questioning this consensus in Jewish law. For example, Rabbi Leonard Kravitz argues that the story of the torturous death of Rabbi Hananiah at the hands of the Romans, which is usually read as a proof-text for the ban on euthanasia, can equally be read to make the case that hastening death when death is inevitable is an act of mercy. Rabbi Kravitz argues that Jews who are terminally ill and suffering should be able to choose a mitah yafah, a good death, which Rashi defines as sheyamut maher, that they should die quickly, particularly given that the Talmud prescribes this kind of death for criminals who will be executed by the court. If criminals deserve a good death, a death in which they are spared long, slow agony and suffering, Rabbi Kravitz argues, shouldn’t those who’ve committed no crime be allowed to choose this as well?

I raise this now in this public forum because my sister has made a film about my father’s death called “Last Flight Home,” and her film is premiering at the Sundance Film Festival today. In the film, viewers will see me, acting as a daughter and also a rabbi, loving and supporting my father as he ends his own life. I am aware that this will be upsetting and even offensive to many in the Jewish community. I do not wish to create controversy on this issue, and I would not have chosen to make this film. I would not have chosen for my father’s death to be viewed by the public at all, and I would not have chosen to champion this issue. But I have cared for others who desperately wished for this choice at the end of their lives, and I think it might be time for the Jewish people to reconsider our views on this important matter.

March 3rd will be my father’s first yahrzeit. May his memory forever be a blessing.