What did Whoopi do wrong? Let’s break it down — and really talk about Jews and race 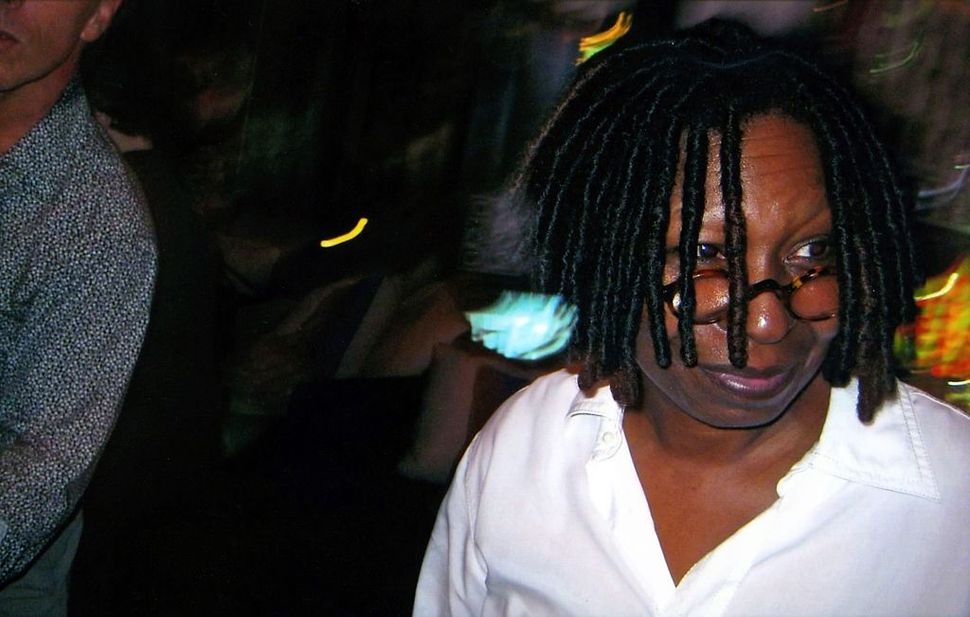 Whoopi Goldberg is seen on the set of “The View” on November 16, 2010 in New York City. By Gary Socol/Getty Images

Before anything else, let me say that I have no intention of “canceling” Whoopi Goldberg. I think she adds an interesting perspective to ABC’s “The View.” That said, I definitely do not agree with everything she does or says, just as I don’t agree with most celebrities who opine on serious subjects in popular media.

Goldberg made a grave mistake in saying that the Holocaust was “not about race,” but rather about “man’s inhumanity to man. “ The response from the Jewish community was quick. The ADL got involved and she has since been suspended from The View for two weeks.

There is so much to unpack here that it’s necessary to break it down into a few issues:

I really believe that Goldberg spoke out of ignorance, not malice. The initial discussion was about a school district banning the graphic novel “Maus,” an action she disagreed with. She is not denying the Holocaust or how horrible it was. But to frame the Holocaust in vague terms like an injustice against humanity is an understatement at the very least. Just as American slavery was unmatched when looking at the instances of slavery throughout human history, the Holocaust stands out as being uniquely horrific in terms of genocides throughout human history, and that’s bearing to mind that none have ever been remotely acceptable.

Goldberg’s response rings the same as saying “all lives matter” when talking about Black Lives Matter, which is a common refrain of conservatives. Likewise, Goldberg seems to be coming at it from the conservative post-racialism argument that society focuses on race too much. People are people, they maintain – to which Goldberg adds “Except for Black people,” who are still the primary victims of racism. To me, this is maddening to listen to because while race is a false construct, it still is very much used against all types of people and as a tool to fragment our society.

I really don’t know much about Goldberg’s personal life, which is the same with so many celebrities we think we know. I was surprised to find out that at one time, she considered herself to be a Jew. Maybe she still does, and if so, that’s fine. I am not in the business of saying who is Jewish and who is not. But if she does put herself out there as Jewish, then how could she be so ignorant about Jewish history? The Holocaust occurred mainly in Europe, where for centuries, Jews were positioned as outsiders. They were not just white people who happened to attend synagogues instead of churches. They were subject to very strict social limitations and worse for thousands of years.

Our media today do not give a platform to the most knowledgeable people, but instead to celebrities and people on the fringes and guaranteed to spark sensationalism. Yes, we have cancel culture and folks even get fired sometimes, like Roseanne Barr. But for the most part, our media reward sensationalism and the celebrities that grab people’s attention. And I think Goldberg knows how to work for her paycheck.

Which makes you wonder: Is she as ignorant as she seems? Look back a few years and you find her defending Mel Gibson despite his very clear antisemitic actions. And before that, she stood by her man (at the time) Ted Danson when he pulled his blackface antics right in front of her. There seems to be a common thread here, that this is not a woman preoccupied with cultural sensitivity.

What is very frustrating to me as a Jewish Black American woman is in discussing antisemitism, there are different definitions of what a Jew is. Antisemitism, especially how it was perpetrated by the Nazis, was based on the falsehood that there is a Jewish race. And too many Jews also buy into that definition.

For example, a common battle cry put out by many Jews who are not of color is “Oh, I am not white, I am Jewish.” That’s an interesting claim to make when there have been books published about Jewish assimilation and the transformation of American Jews into white Americans. In this regard, Goldberg did say something I agree with: That if the KKK is marching down the street and she is standing there next to a Jew (not of color), the Klan is going to target her because how would they know that the Jew is a Jew?

Yair Rosenberg wrote a great article in the Atlantic, where he said the following:

“Goldberg is not an anti-Semite, but she was confused – and understandably so. In my experience, mistakes like hers often happen because well-meaning people have trouble fitting Jews into their usual boxes. They don’t know how to define Jews, and so they resort to their own frames of reference, like ‘race’ or ‘religion’ and project them onto the Jewish experience.”

If you look at American society, you cannot dismiss white Jews from being the beneficiaries of white privilege in this society. And if you propose that there is a Jewish phenotype of sorts – where you believe you can tell a Jew just by how they look, then you’ve effectively subscribed to the Nazi approach of defining who a Jew is. Why would someone do such a thing?

4. A continued lack of communication and understanding between Blacks and Jews

A discussion between Blacks and Jews from 1969 that has surfaced on Youtube recently that did not involve celebrities or those being deliberately provocative gives a fascinating view of how they saw racism and antisemitism. In it, they pretty much conclude that they knew very little about their respective unique experiences in American society.

I am struck by how little progress we’ve made in 50 years, with so many misconceptions and assumptions and unresolved anger and hurt. On average, do Jews and Blacks today live lives that intersect in any sort of meaningful way? If not, then the ignorance will continue. And Whoopi Goldberg will not be the last celebrity to brush off the role of the Holocaust on Jewish history.

What did Whoopi do wrong? Let’s break it down — and really talk about Jews and race