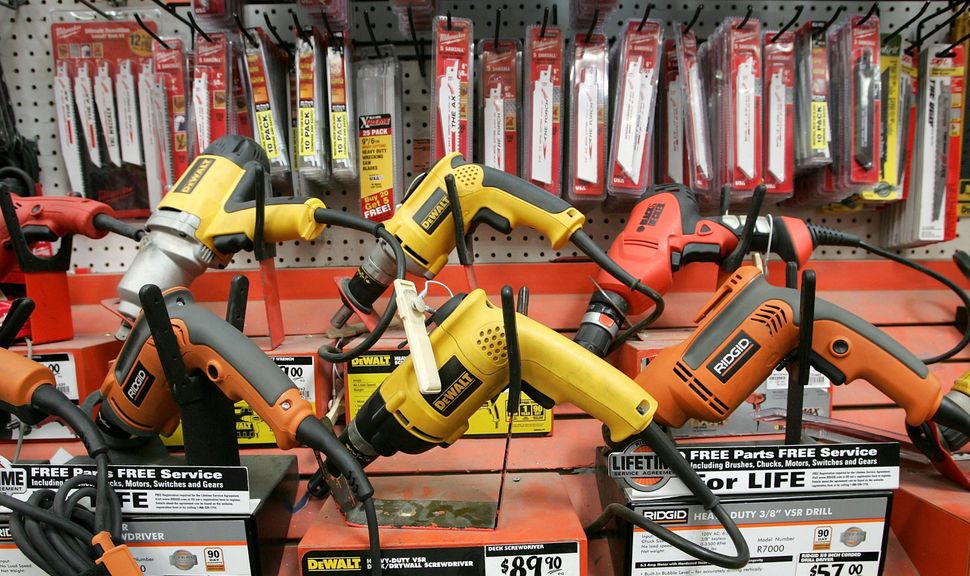 A hardware store. Courtesy of Getty

I was shopping at Lowe’s Hardware last Sunday to pick up some things for our new home in Austin, Texas, having just moved back after 26 years in greater Chicago. I was with my son, who had turned four a few days before and is already interested in tools and building materials (and cars and construction vehicles. Total dude).

I had trouble finding magnetic fasteners for curtain rods, so I was waiting for the store associate to finish with another customer. I couldn’t help but notice that this other customer — a guy about 10 years younger than I am and, although around six inches shorter, built like a Mack truck — was covered on both arms in neo-Nazi tattoos.

As a yarmulke-wearing, hard-right Zionist Jew, a thousand actions and scenarios went through my head, most of them including some form of violence and-slash-or usage of the amazing assortment of weapons for sale nearby. This was happening only two weeks after a gunman held a rabbi and several congregants hostage for hours in their synagogue outside of my hometown of Dallas. (In fact, before we settled on Austin, my wife and I almost chose a house just a few doors down from that very synagogue.)

I was weighing my chances as a scrawny but outraged 64-year-old ex-hippie against a shaved-headed fireplug who looked as if some of those tattoos could have been made under the glare of a jail-cell light bulb. And, eclipsing all else: did I want to start something with my wee boy sitting right there?

Suddenly, the clear answer to my dilemma presented itself.

The clerk couldn’t help the guy find a certain type of rubber grommet, so I started to look up on my smartphone nearby stores that might have what he needed. I found several possibilities and chimed in, sharing the information with the tattooed customer. In doing so, I learned that he was seeking the parts for his classic Harley-Davidson.

The light went on in my head: I knew exactly what he was looking for. They were actually located right in front of us, on a lower shelf. I reached down, grabbed three sizes, and handed them to him.

“Here. I’ll bet these will work perfectly!” I said.

He was visibly delighted and, inspecting them and picking the size he needed, began discussing the trouble he was having with his rebuild. I assured him that I understood completely, being a gearhead myself, driving on a daily basis a modified Nissan street-rod I’ve been working on for the past five years. Which, of course, led us into the typical conversation that car (and motorcycle) guys have in such situations.

He did not act uncomfortable or even the slightest bit off during that conversation. As we talked, I noticed that his tattoos were faded; they looked to be at least a decade or two old.

As each of us prepared to go about the rest of our shopping, he thanked me for helping him. I pointed at my yarmulke and at his most prominent Nazi ink, smiled, and said: “Glad to help — and don’t worry; I won’t tell any of your friends who helped you.” He immediately cast his gaze to his feet, broke out in a very embarrassed grin and blushed deep crimson. Never looking up, he gave the barest nod of perception and a mortified chuckle.

It became clear that those tattoos were souvenirs of a different past, and that we were just two middle-aged guys enjoying common ground in that temple we share — a suburban hardware store on a Sunday afternoon.

David Feder is a former chef and current food and nutrition writer and consultant. He lives in Austin with his professional comedienne wife, their son, and their spoiled-rotten wiener dog, Teeny Wienie Longwienie McQueenie.