The years I spent in Ukraine taught me a very Jewish concept: hope 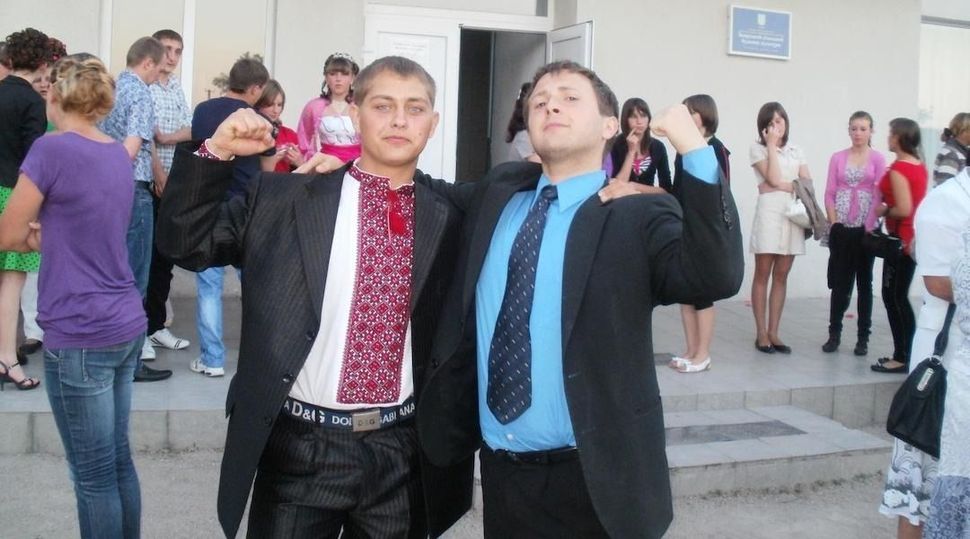 Jeremy Borowitz, right, and one his students, Yuri Verhulatsky, clown during a graduation ceremony held in Boyarka, Ukraine, where Borowitz was a Peace Corps volunteer in 2011. (Courtesy the author)

BERLIN (JTA) – I watch what is happening in Ukraine and I feel helpless, scared for the state of the world, terrified for my friends and former students and anxious about the future of the place that I called home for nearly four years of my life.

When I first arrived in Ukraine 12 years ago as a Peace Corps volunteer, I didn’t speak the language, was intimidated by the culture and was plagued by stories of pogroms and mass shootings that had penetrated the Jewish collective trauma.

Imagine my surprise (not to mention the surprise of my family and friends back home in the United States) when it was Ukraine, and life in a small Ukrainian village, that led to my own spiritual awakening, which brought me closer to Torah, prayer, and God, and which was the catalyst for the rabbinical role in which I find myself today.

Ukraine has somewhere between 43,000 and 200,000 Jews, a wide swing that depends on who is counting and how they count. The vast majority of these Jews live in four major cities — Kyiv, Dnipro, Odessa and Kharkiv — where one can find a vibrant and breathing Jewish life.

In addition, most large to mid-size Ukrainian cities have synagogues and/or cultural centers, and you will often find in small towns across the country a handful of elderly Jews who still gather from time to time for holiday celebrations. One of my most transformative Jewish experiences was an impromptu Torah-reading for Simchat Torah celebrations in the town of Zvenyhorodka.

Kyiv, the city which I used to call home, is home to multiple synagogues, a JCC, grassroots social and cultural movements, a Hillel, a Moishe House and a kosher bar, among other institutions. While many young Jews left Ukraine in the past eight years for economic reasons, as recently as a few weeks ago I spoke with friends excited to mark a post-COVID return to Jewish life with a massive Purim bash.

I spent Tuesday night glued to my phone, unable to sleep, counting Russian battalions on the border and refreshing Twitter feeds in English, German and Ukrainian. I watched speeches by Russian President Vladimir Putin and Ukrainian President Volodymyr Zelensky. Early the next morning, after I got my kids off to school, I called Vassil Ivanovich, the physics and math teacher at the school in the small village of Boyarka that I called home for two years as a Peace Corps volunteer.

I asked him how he was doing, expecting to hear a mix of my own trepidation and nervousness and uncertainty. Instead, he said he was doing great. The winter thaw was dropping away, and he might even be able to plant potatoes in the next few weeks. War lingers on the horizon, but the field must be sowed.

And when I spoke to some of my friends in Kyiv, they were concerned about the Russian invasion but were more worried that someone had put dairy dishes in the meat dishwasher and if everything was now treyf.

And while texting with a former student we discussed her husband and their plans for a family and, sure, she said, there are tanks at the border, but right now she was just trying to imagine her future.

Some might call this naivete or denial. I call it hope. And hope is the ultimate act of resilience.

Jews are no strangers to hope. Maimonides tells us that one of the 13 principles of Jewish faith is the complete belief in the coming of the Messiah. Despite persecution, despite hardship, we are compelled to believe in a more perfect world. The national anthem of the state of Israel is called “Hatikvah,” literally “The Hope,”’ its lyrics adapted from a 19th-century poem that expressed a longing tinged with optimism. “Od lo avda tikvateinu.” Our hope has not yet died.

In fact, the Ukrainian national anthem captures similar themes. The opening line declares “Shche ne vmerla Ukrayiny,” which translates to “Ukraine has not yet died.” Written in the mid-19th century, this line is in defiance of history, a declaration that an entity that had yet to exist (the first independent Ukrainian state wouldn’t come about until the post-World War I era) had nevertheless refused to perish.

I think a lot about defying history. I am currently a rabbi living in Berlin, a concept that would have been anathema to most of my grandparents. I walk down streets every day that are littered with Stolpersteine, the brass plaques or “stumbling stones” memorializing the Jews who used to inhabit these buildings. But despite this obscene history, and despite my own encounters in Germany with violent antisemitism, we continue to live here, to build up Jewish life here, to believe that there is a future for Jews here, if only we can will it to be. To live our lives as Jews is, for me, a deeply resilient act.

It feels like the whole world is currently mired in some sort of COVID PTSD, traumatized by the isolation, by the loved ones we lost, by carefully crafted and curated worlds that were turned upside down. And so we read of impending doom on the Eastern front and we want to shout out to our fellow Jews, “It’s time to run! It’s time to get out!” And meanwhile they are busy kashering their dishwashers.

One of my friends in Ukraine shared with me some advice from his father regarding the current moment: The biggest regret of his own relatives in World War II was that they split up the family in the face of upheaval. No matter what, they will stay together. As long as they are together, hope remains.

Can our Jewish family stay together? Both Russia and Ukraine have strong, proud Jewish communities. And while I am decidedly pro-Ukrainian, it would be wrong to suggest that the global Jewish community is unanimous in its views on this conflict. Then again, we never are.

And yet despite our differences, despite our disagreements, despite the despair I feel when I think of the future of Ukraine and my friends there, I am forcing myself to hope. There are moments when I feel a sense of déjà vu from eight years ago, when the world stood by as Russia annexed Crimea and provoked war in Donbass. But the post-World War II order has been more unified in its opposition than it has seemed in decades. I’m not sure if these words and those sanctions will do anything to quell the violence. But for the moment, it does give me some hope.

—
The post The years I spent in Ukraine taught me a very Jewish concept: hope appeared first on Jewish Telegraphic Agency.

The years I spent in Ukraine taught me a very Jewish concept: hope