Ukrainian Jews have thrived under democracy. I pray my ancestral country endures 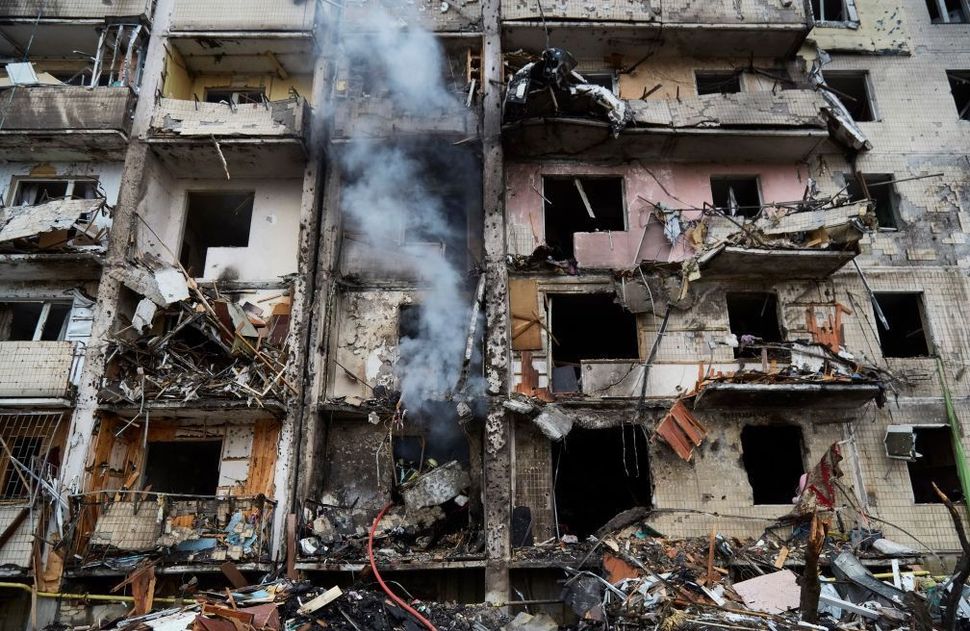 Firemen extinguish a fire inside a residential building that was hit by a missile on February 25, 2022 in Kyiv, Ukraine. By Pierre Crom/Getty Images

In 1929, my great-grandfather was given two weeks to leave Ukraine. Soviet authorities were intent on seizing his business.

My great-grandfather Avrum owned a house in Uman and a dacha— a summer home — in Crimea. He was a NEPman— one of the successful traders who sprung up under the New Economic Policy of the 1920s. Like the kulaks (peasants rich enough to own considerable land and hire labor), NEPmen like my great-grandfather were soon deported, arrested and sentenced to death all over the USSR.

Avrum took the warnings seriously, taking his wife (my grandmother), along with her three siblings and two nieces, to Cuba, where they waited two years for US visas. They wore fur coats on their exit from the country, knowing that everything else would be stolen at the border. 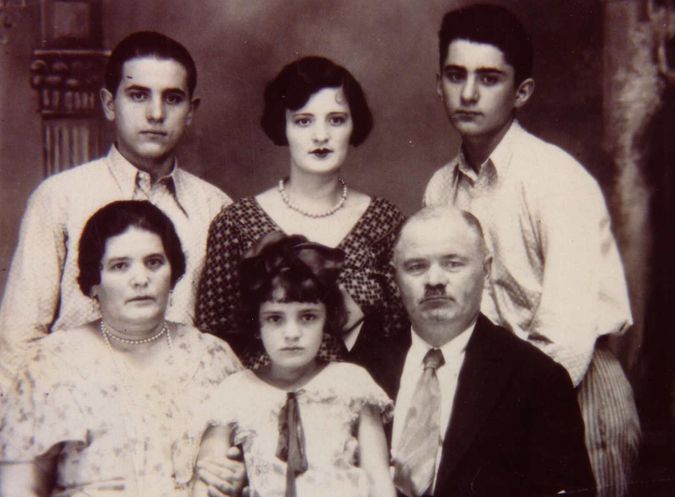 The author’s family who had to flee from Ukraine, including his great-grandfather Avrum (bottom right) and his grandmother Sonya (top middle), 1928. Courtesy of Ed Weinberg

Avrum’s brother Beryl, who was also his business partner, refused to leave. He was never heard from again.

Over the next half-century, my grandparent’s generation of Ukrainian Jews thrived in the United States. But their flourishing was accompanied by the grim knowledge that such success would have been impossible had they stayed in Ukraine.

At its height, Jews comprised 15% of Ukraine. Most of them were killed by the Soviets, then the Nazis, then by the Soviets again.

But this past summer, on a quest to find my grandmother’s former house, I was surprised by the thriving Jewish life I saw in Ukraine. I took it as a sign that Ukraine’s brutal past could be overcome, and that Jews like me could find a home there. It was unlike other formerly Jewish places I’d visited in Europe, where the Jewish presence was just a memory, or worse, a cultural attraction. 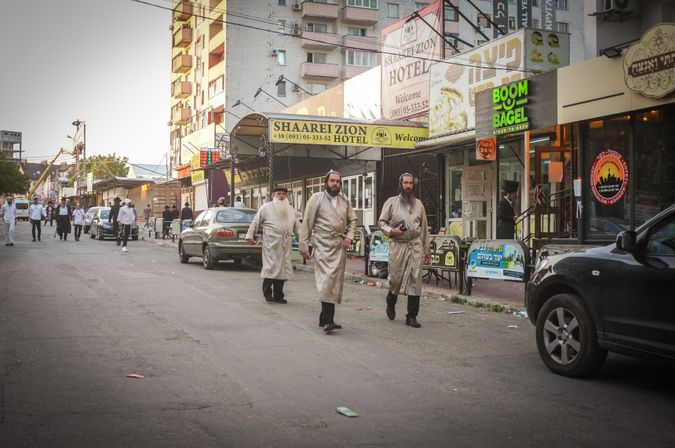 With 48,000 self-identifying Jews, Ukraine has the 12th-largest Jewish population in the world. During the annual hasidic pilgrimage to Uman, where many Jews pay tribute to Rabbi Nachman of Breslov, that number grows past 100,000.

Unlike my great-grandfather, Ukrainian Jews are staying put. One of them is the president, after all.

My grandmother’s former house was on Tolstoy Lane, two blocks from Rabbi Nachman of Breslov’s grave, the heart of the pilgrimage.

I wasn’t able to find it. Hasidic men in shtreimels prayed on the balconies of poured-concrete high-rises on her former street, and modest homes occupied other lots. The story I’d held about dispossession was replaced with another, more familiar one — that of gentrification.

In Kyiv, I passed a bas-relief of Golda Meir. A block later, I saw a statue of Sholem Aleichem doffing his hat in a public square. A rugged-featured teenage boy posed in front of it, tzitzis dangling. 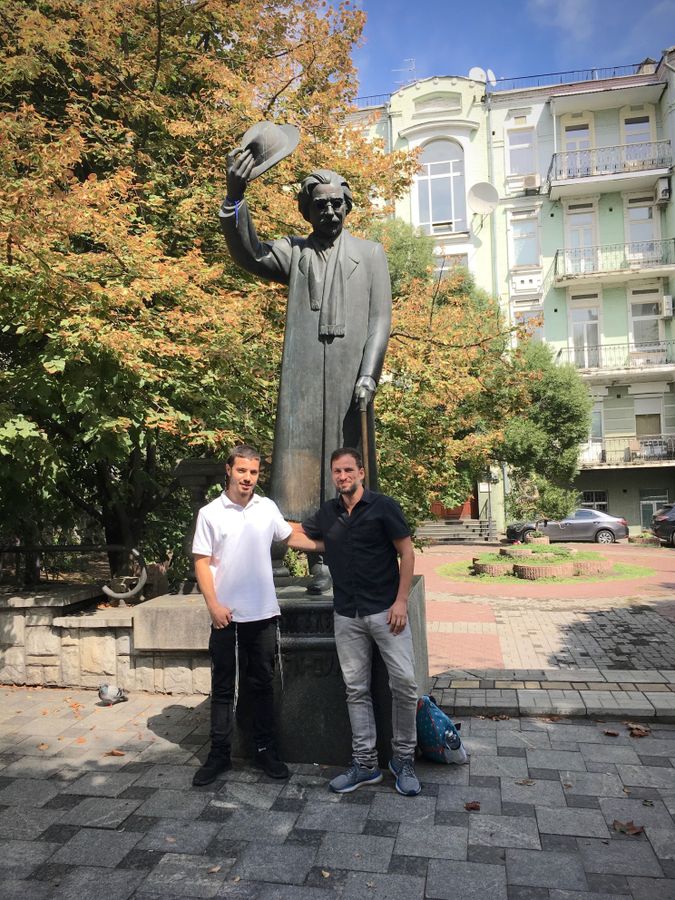 The author (right) posing in front of the Sholem Aleichem statue in Kyiv, Summer 2021. Courtesy of Ed Weinberg

There was a sad-looking Sholem Aleichem Museum embedded in the Arena City nightclub and shopping mall complex. Inside I found a collection of Jewish artifacts and a curator who was passionate about his mission.

He lamented the demolition of the great author’s actual home, razed to make way for Arena City. But he balanced this disappointment with pride that the museum secured a place in the modern city for its Jewish heritage.

The curator was a refugee from the breakaway Donbas region, the site of a low-intensity war that’s claimed 14,000 lives since 2014. Jews were among the 1.5 million forced from their homes in the past eight years. 30,000 of these Jews moved to Israel in the ensuing years.

What I saw in western Ukraine belied this fact. I saw religious Jews on the streets and Hebrew on billboards and buses. Their continued presence made me feel that Ukraine’s vision for a pluralistic democracy includes Jews as well. 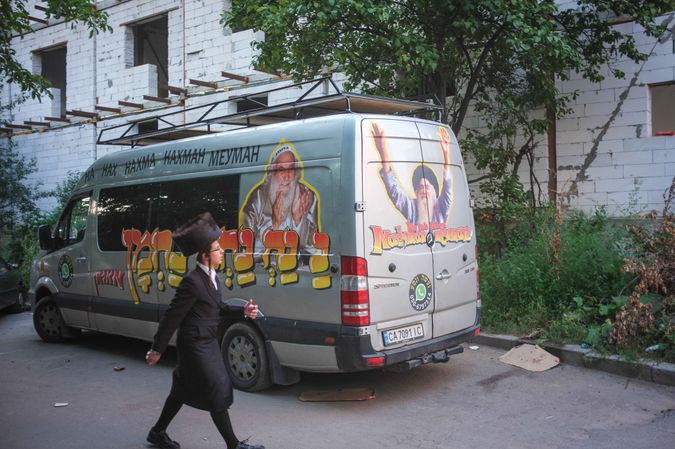 A Hasidic man walking by a mitzvah tank in Uman, Ukraine, summer 2021. Courtesy of Ed Weinberg

Putin’s incursions are not the same as the Stalinist policies of 100 years ago, but they may have some of the same effects. In the USSR, there was great concern about enemy aliens — ethnic and national minorities with overlapping loyalties — residing within the country’s borders. The solution to this was ethnic cleansing on a scale rarely seen.

Between 1936 and 1952, three million people were forcibly relocated from the USSR’s Western borders to ‘special settlement’ zones in Siberia and the Kazakh steppes, paving the way for increasing Russian demographic prominence in these regions — a cycle being repeated in Crimea today.

My grandmother’s Ukraine contained all different kinds of Jews. And although under constant threat, they were integral to the country’s life and society. Their identity wasn’t a stance they took on, but just a part of who they were.

Even though Ukrainian Jews today make up a small percentage of the overall population, their presence gives me faith in the democratic ideal, a world that includes both Ukrainians and Jews.

Ed Weinberg is an American journalist who writes on architecture, international oddities and antisemitism. You can find more of his work at edweinberg.com.

Ukrainian Jews have thrived under democracy. I pray my ancestral country endures