The long, sad echo of applause for Will Smith 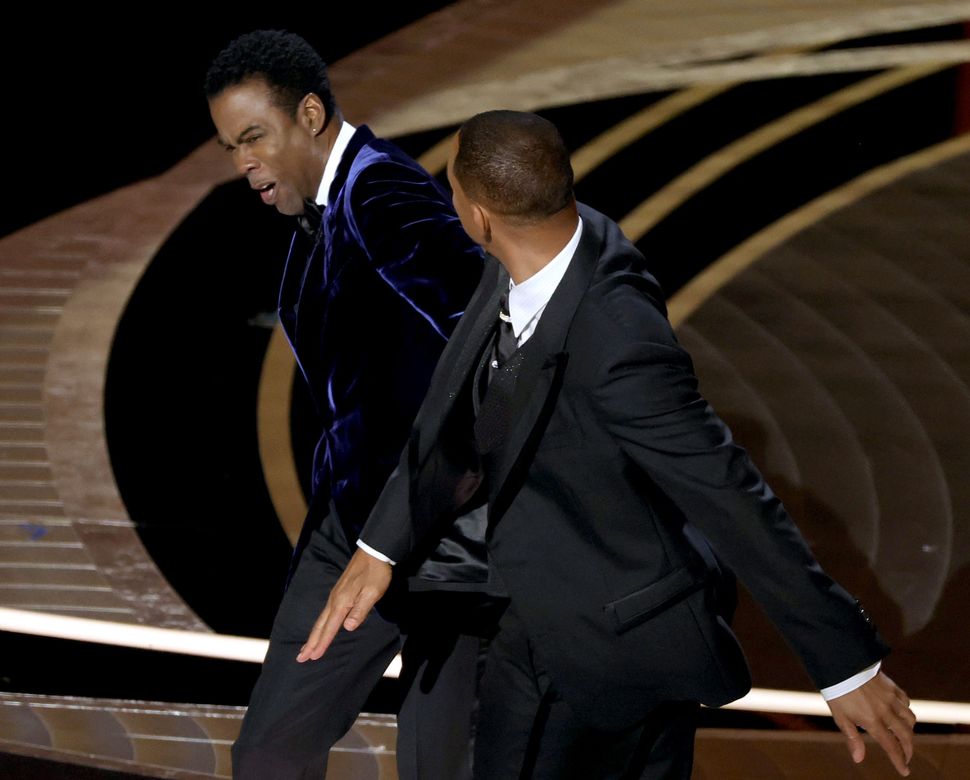 Will Smith slaps Chris Rock onstage during the 94th Annual Academy Awards at Dolby Theatre on March 27, 2022 By Photo by Neilson Barnard/Getty Images

If, as the Talmud tells us, silence is akin to complicity, what about … applause?

The guests at Hollywood’s Dolby Theatre for the 94th Academy Awards Sunday night weren’t required to wear masks, but with both Purim and the worst of the pandemic in the rear-view mirror, we finally got to see who they really are.

And we could tell that not because of what they did or didn’t wear, but because of how they acted.

A lot, maybe enough, has been written about Will Smith, who left his seat, strode to the stage and then slapped, that is, assaulted, the comedian Chris Rock after Rock told a joke about Smith’s wife, Jada Pinkett Smith.

For me, the most powerful insight on Smith came from Robin Givhan, a columnist at the Washington Post, who saw right through the expensive costume the actor wore that evening.

“When one strips away the rituals and glitter associated with the Oscars,” she wrote, “thuggery is what television viewers witnessed.”

Givhan, who won a 2006 Pulitzer Prize for fashion criticism, wasn’t fooled by facades.

But what fascinates me is how so many people who witnessed the same thuggery were fooled, and chose to be complicit in it. Almost a week later, that hasn’t changed. The people who applauded Smith or made excuses for his behavior have dug in.

If the cover-up is worse than the crime, what we watched was a collective real-time cover-up, a moral lapse far worse than a single slap.

It began when Will Packer, the producer of the awards show, decided in that instant not to stop the show long enough to remove Smith. He hasn’t explained the reason for that decision, only tweeting that for him it was “very painful” to watch.

Then the masks of class and civility came off almost everyone else as well.

Smith returned to his seat, and minutes later was back on stage receiving the Oscar for Best Actor. People who just watched him assault a man for telling a joke stood and applauded him. Other A-listers hugged him. They sat rapt as he gave a speech about channeling love and standing up for one’s family, rationalizing his act of violence and not apologizing to Rock.

Then many of them applauded him again.

The comedians who hosted the show, Amy Schumer, Regina Hall and Wanda Sykes, didn’t show their best faces either. When they returned to the stage, they did not call out Smith and the producers, but stuck to the script. This despite the fact that they can do what they do in part because comedians like Lenny Bruce, Joan Rivers and Rock himself pushed the envelope of acceptable humor, risking censure and prosecution, without committing violence in public. They missed their chance to stand up for a fellow comedian, and thus for themselves.

It’s easy to second guess. I wasn’t there, and none of us can know how we would have acted.

But here’s the fortunate truth: the Academy, and everyone in that audience, gets a do-over.

Shortly after the assault, the Academy released a meaningless statement that it doesn’t “condone violence” – though, as numerous people pointed out, its non-action on Sunday night suggested otherwise.

On Monday, the Academy released another statement, this time condemning Smith’s actions and saying the organization had launched “a formal review around the incident and will explore further actions and consequences.”

The audience members who stood and applauded Smith also have a chance to try again. Being caught up in the moment isn’t the worst excuse — we’ve all been there — but then comes the chance to look back and say what you should have said or done.

And out in the cheap seats where the rest of us watch and tweet, the conversation has naturally been fraught and, as with most other issues, divisive. It surprised me how many people, including the actress Tiffany Hadish and writer Roxane Gay, rationalized Smith’s assault.

“Love may make a person yell a rebuke to an insulting comic,” wrote Givhan. “It might make you consider all sorts of irrational acts. But love doesn’t force you to behave like a violent clod and then wait a day before you publicly apologize to the person that you actually clobbered.”

Given all that is going on in the world — the warming planet, the war in Ukraine, the fight for democracy here at home — Smith’s assault and its aftermath might seem like a distraction.

But it matters, because what remains so shocking about Oscar night was how ugly society can get once the masks come off.

The long, sad echo of applause for Will Smith