My family was murdered in Austria during the Holocaust. Now they’re offering me citizenship. Should I accept? 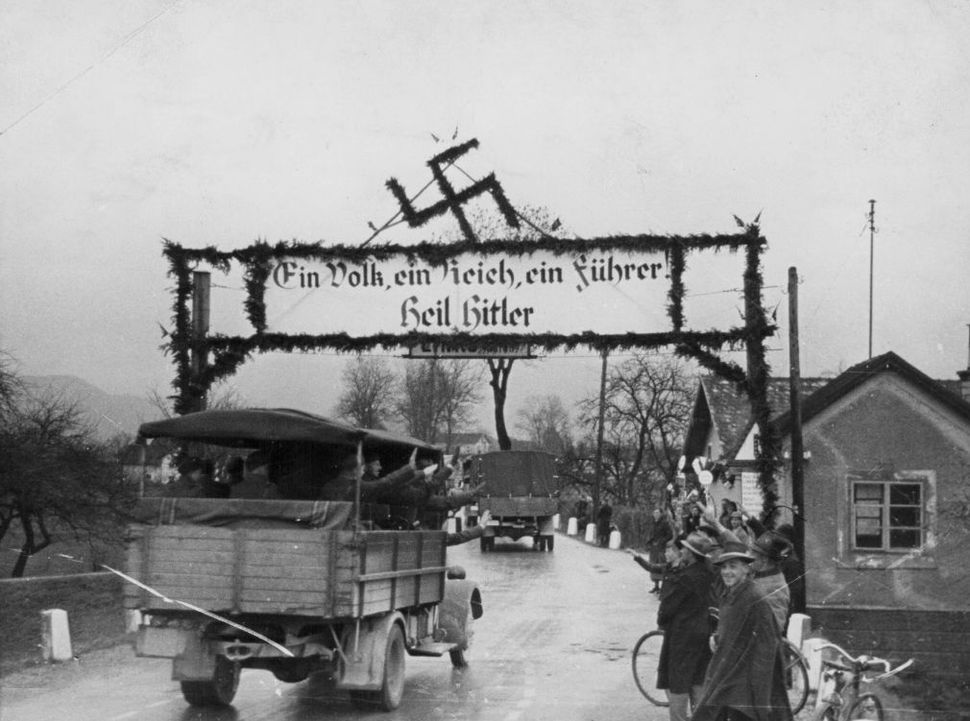 Nazi propaganda during World War Two; ‘One People, One Nation, One Leader, Heil Hitler’, in Vienna, Austria, circa 1940. By European/FPG/Getty Images 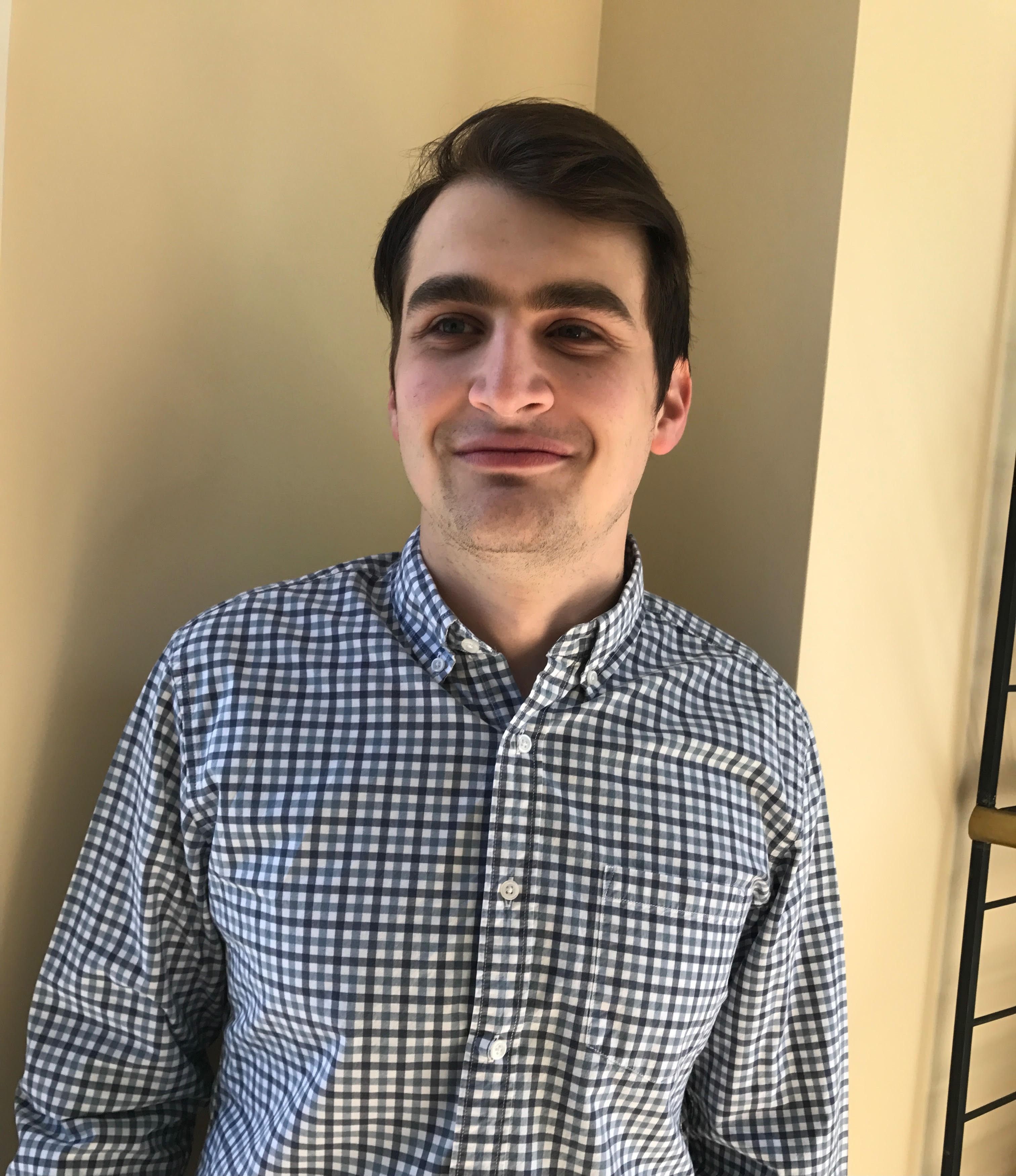 My mother and I discovered my grandmother Erika’s faded birth certificate on a trip to Austria in 2019. It was in an administrative office building adjacent to the Stadttempel synagogue, the only synagogue built before 1938 that was not burned by the Nazis — and only because it was too close to the Nazi headquarters in The Hotel Metropol, 150 meters away.

I felt conflicted when, six months later, my brother told my mother, sister and me that descendants of Jews who had lived in Austria between the years 1933 and 1955, could now obtain citizenship through an amendment to the Austria Nationality Act. I wondered if I would be desecrating the memory of my Nana Erika and her murdered family members by becoming a citizen of the nation that destroyed them. It is an existential question for Jews: how do we best honor the lives of those six million lost?

If I hadn’t taken that trip to my grandmother’s birthplace — the woman I was named after — I may not have been conflicted at all. I would have applied for citizenship simply because it could be useful: I want to live in Europe within the next 10 years and getting an Austrian passport would make that goal much easier to attain. In considering my own family history, I hoped to decide whether I truly wanted to become a citizen of Austria.

There’s no straightforward way for me to comprehend Nana Erika’s young adulthood: what it would be like to have to leave everything and everyone I know behind because I was being hunted by evil men intent on murdering me. Nana Erika was only 20 when she traveled with her brother Erwin on a boat to Ellis Island in 1938, shortly before Kristallnacht. Their parents’ appeals for American visas were rejected, and her mother and father were deported and shot to death in a field in possibly Russia – we will never know for sure the exact location where they were murdered.

The majority of Nana Erika’s extended family died in concentration camps. American Jews born multiple generations after the Holocaust like myself have the privilege of not understanding this brutal reality, and I don’t think my grandmother would have wanted us to. An unlikely optimist, Nana Erika often repeated a mantra: “Most people are good.” 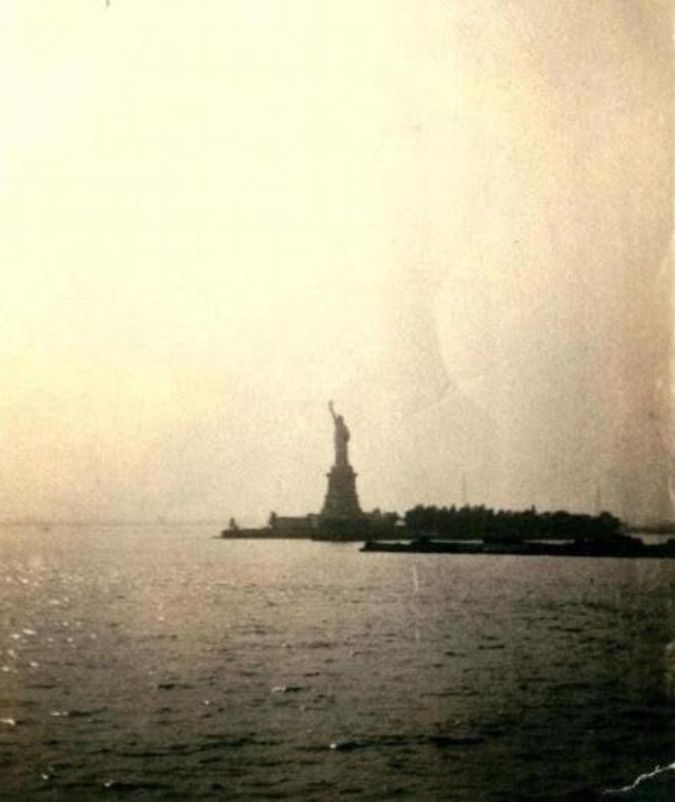 The author’s grandmother Nana Erika took this photo of the Statue of Liberty upon arriving at Ellis Island in New York in 1938. On the back she wrote: “just an hour but what a difference in our lives.” Erika and her brother were the only members of their family to survive the Holocaust. Courtesy of Erik Sommer

The dilemma Nana Erika and other Holocaust survivors faced was how to ensure their descendants remained vigilant against the dangers of antisemitism and group prejudice, without psychologically scarring them. It is unfair to judge the modern citizens of Austria for the crimes of their ancestors — maybe the best way to honor Nana Erika and her faith in the good in people meant accepting this new passport, and choosing connection over trauma.

In the spirit of Nana Erika’s optimism, I hoped to better understand my family’s history in Vienna on that 2019 trip. I expected to feel a connection to the city – the grand opera house Nana Erika adored, the beautiful synagogue tucked away in the Jewish quarter, and at her apartment. But being there in person, I didn’t feel like I was returning to my roots at all. Austria embodied everything that had been taken from my family before my grandmother escaped to the United States.

I felt most viscerally the cruelty Austria had shown my family when I saw Nana Erika’s former apartment building — the apartment she had grown up in had been given to a non-Jewish family after her parents were deported. When my grandmother returned in the 1990s and asked to purchase her father’s clock still hanging on the wall, now owned by the non-Jewish family along with the rest of Nana Erika’s family’s furniture, the new owner of the apartment said she was saving it for her own son. 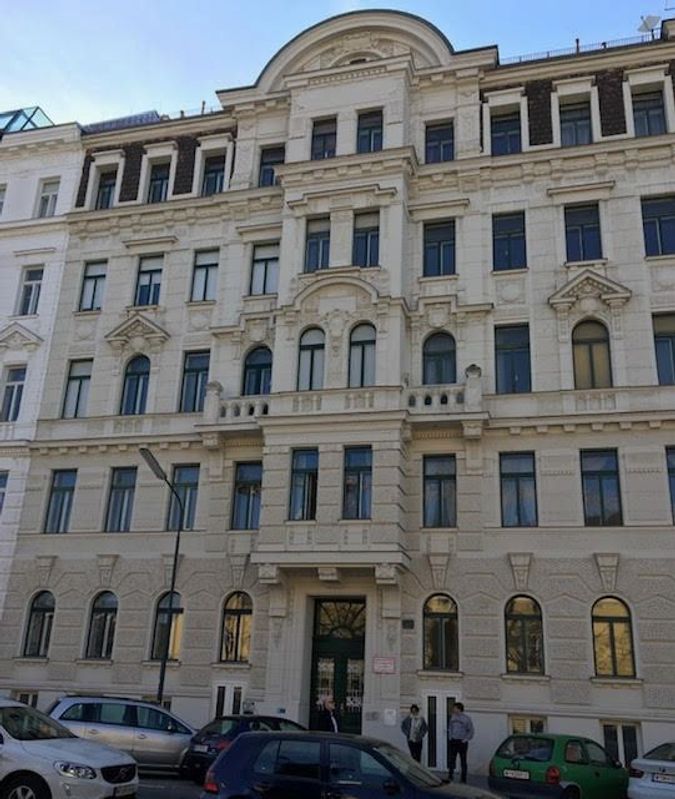 The exterior of the author’s grandmother’s former apartment building in Vienna, summer 2019. Courtesy of Erik Sommer

Nana Erika only received measly sums of reparations in the years after her family was annihilated, in Austria’s notably meager attempt to wipe its hands clean of guilt.

Furthermore, Austria continues to harbor antisemitism, all too often resulting in violence against innocent Jews perpetrated by far-right extremists. The government itself was run by a coalition including the far-right Freedom Party of Austria between 2017 and 2019 (it was dissolved due to a corruption scandal), a party that propelled itself to power through the scapegoating of Middle Eastern immigrants. The Freedom Party has justified closing Austrian borders to war refugees by blaming them for societal problems, in a manner that shows little reverence for a lesson that should have been learned from the Holocaust: human beings have an ethical responsibility to show compassion and empathy to those unjustly persecuted, even when doing so requires bravery.

Humanity’s worst impulses do not fade with time. It seems ever more important to recall the day of Mar. 15, 1938, when Hitler declared to a cheering crowd in Vienna’s decadent Heldenplatz Square that he had been ordained by God to spread the dogma of the Third Reich throughout Europe. As I write this, thousands of Ukrainians sleep in the subway as bombs drop on their cities at the hands of another despot, a man whose greed for empire remains divorced from any semblance of morality.

It’s in these sorts of historical moments that Jews can decide what their identity means to them, how they will honor the ancient tenets of our faith and tribe of welcoming the stranger and valuing the dignity of all beings. How will we react to hundreds of thousands of immigrants fleeing from war, whether they be from Eastern Europe or the Middle East? Or when our own former U.S. president propagates white identity politics to galvanize constituents and sow distrust into their perceptions of democratic institutions?

I believe that how I choose to act in the face of these injustices — through my speech, through my vote, through the way I treat wrongly persecuted individuals — is the best way to honor my Jewish heritage, my Jewish identity and Nana Erika.

I have not yet decided formally, but I am likely going to reject the offer of Austrian citizenship. I believe one’s vigilance against demagoguery and bigotry more profoundly honors the lives of my family and others who perished in the Holocaust than ownership of any passport.

Erik Sommer is 27 years old and works in public relations. He lives in Brooklyn, New York.

My family was murdered in Austria during the Holocaust. Now they’re offering me citizenship. Should I accept?