Passover in a pandemic means always being ready to pivot 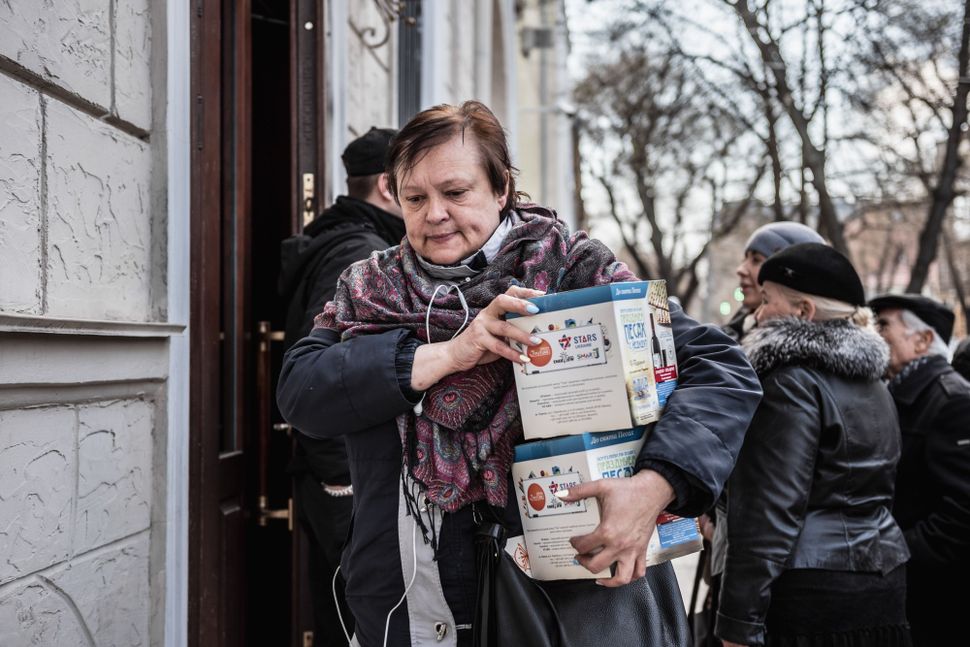 A woman carries Chabad-distributed matzo in Ukraine. Courtesy of Chabad

This is an adaptation of Looking Forward, a weekly email from our editor-in-chief sent on Friday afternoons. Sign up here to get the Forward’s free newsletters delivered to your inbox. Download and print a special edition of our free, printable magazine: Fiddler on a Mormon Roof.

And on the third pandemic Passover, we were reminded that plans should always be made in pencil.

I was meant to be in Washington, D.C., right now, one of 23 guests at a full-blown Seder akin to those of the Before Times. But the hosts got COVID, so instead I’ve just finished making haroset and taken my first batch of Passover rolls out of the oven — we’ll be 10 around our table here in Montclair, N.J., tonight.

We made the switch Monday morning after a positive rapid showed it would be too risky for my immunocompromised and 81-year-old dad to be in D.C., and just as I was headed to the airport for a whirlwind trip to Los Angeles. So that was me ordering my first Passover groceries via Amazon from the back of an Uber.

My parents in Boston kicked into high kitchen — short ribs, matzo-ball soup, farfel stuffing, mandelbroit, flourless brownies, gefilte and more — while my sister in Chicago paid the change fee to switch her family’s flights, stuffing haggadahs into their carry-ons since I cannot find the box of them I know I have somewhere. The D.C. crew and a niece quarantined with COVID at Syracuse University will, I hope, join us via Zoom.

We know how to do this now, 26 months into this new and ever-changing normal. We have learned to drill down to the essence of things — what is the meaning of this Seder to you? — rather than get distracted by the details. We have come to appreciate whatever we can do rather than stress about what we cannot.

We expect the unexpected. We pivot, we improvise. We have to.

My family’s scramble is nothing, of course, compared to the rewriting of penciled plans required of the 200,000 Jews living in Ukraine before Russia invaded on Feb. 24.

We may be separated from loved ones because of a coronavirus infection that will likely pass within a week; many of them have had their families cleaved by this horrific war, men mostly required to stay and fight while many women flee to find safety for their young ones, no idea where, when or even whether they will ever share a Seder together again.

And it’s quite a wonder how the international Jewish community has pivoted and improvised to help.

New York’s UJA Federation and 20 nonprofit partners have distributed more than 43 tons of matzo, 22,000 Seder kits and 5,000 haggadahs across 24 cities in Ukraine and nine countries hosting refugees. One of those partners, chef José Andrés’s World Central Kitchen, plans to serve 15,000 Passover meals a day to refugees in Poland. 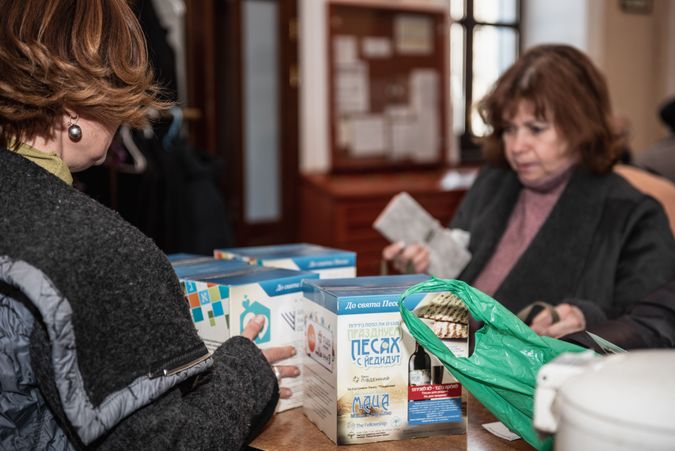 Chabad and other Jewish organizations have distributed many tons of matzo and other supplies across Ukraine. Courtesy of Chabad

Meanwhile, rabbis from Chabad and other movements are hosting at least 53 Seders with a total of more than 7,000 guests inside the war-torn country, and distributing thousands of at-home Seder kits; bakeries have even made mini-matzos for soldiers to ensure that they get a taste of the holiday.

In Israel, many Seder tables will include new guests who are among the more than 23,000 Ukrainians, about a third of them Jewish, who have taken refuge there so far.

This Passover will certainly not be anything like what they must have planned. History is being written — in pencil — in real time all around them on this holiday. When they conclude their Seders with “Next year in Jerusalem,” I imagine Ukrainians everywhere will be thinking: I have no idea where I’ll be next Passover, who I’ll be with, how I might celebrate.

Do any of us, really?

The Ukraine war has perhaps made it a little more real, this year, to follow the haggadah’s mandate of imagining ourselves in the story — as if we, ourselves, made the exodus from Egypt. Talk about plans changing at the last minute: no time even for the bread to rise.

I know I have been trying to imagine myself in the Ukrainian story. What would we have done — my family, our community, all America — facing a threat like Russia’s assault? Would we have made Molotov cocktails in those early days? Signed up for the volunteer patrols? 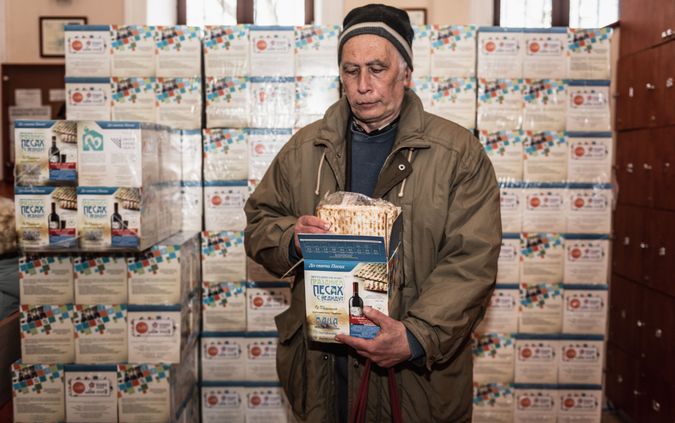 A man receives Chabad-distributed matzo in Ukraine. Courtesy of Chabad

What would happen to the United States if a quarter of our residents were displaced from their homes? Where would we go if forced to leave the country, and how would we fare there?

My favorite character from the Passover story, one of my top heroes from all Jewish history and lore, is Nachshon ben Aminadav: the man who jumped into the sea.

I do not recall hearing much about Nachshon growing up; I think we should talk about him much more, because he is the kind of leader we need most — not a king or a president or someone with official authority and responsibility of any kind. Just a guy who stepped up when he had to — or, more precisely, when he understood there really was no other choice.

Nachshon is said to have been the first person to step into the Red Sea, before it parted. The Israelites had arrived at the shores of the raging sea, with an equally raging Egyptian Army following — at least in the movie version — close behind on horseback.

A command was given to plunge into the sea, and one by one, the tribes of Israel hesitated. Which you can understand: Who’s crazy enough to walk into a raging sea, leading people to what seems like certain death?

Some see Nachshon’s decision to take that plunge as a pure act of faith. It is also, though, an assessing of the odds. Standing still, with the Egyptian Army racing towards you, is a terrible option — decidedly certain death. So while walking forward into a raging sea seems crazy, at least it’s walking forward. Nachshon knew the threat behind him; what lay ahead of him was unknown.

We are beyond blessed not to have the Egyptian or Russian armies actually bearing down on us as we sit down for our Seders tonight. And we are lucky we are not standing before a raging sea.

But we should not be fooled into believing that we really ever know what is ahead, regarding the coronavirus or anything else. Yet we must keep walking forward, pencils in hand.

We have a special edition of our free, printable PDF this week: a longform report on an all-Mormon production of “Fiddler on the Roof.” Download the magazine here, or read it at the link below.

I’m a sucker for all things Billy Joel as well as all things a capella, so when my sister-in-law shared this video this morning, I kept playing it over and over. It’s by Six13, a New York-based male sextet founded in 2003 that has produced eight albums, garnered more than 18 million video views online and performed for the Obamas and the late Justice Ruth Bader Ginsburg. Great background music while you set the Seder table!

Also from the Forward 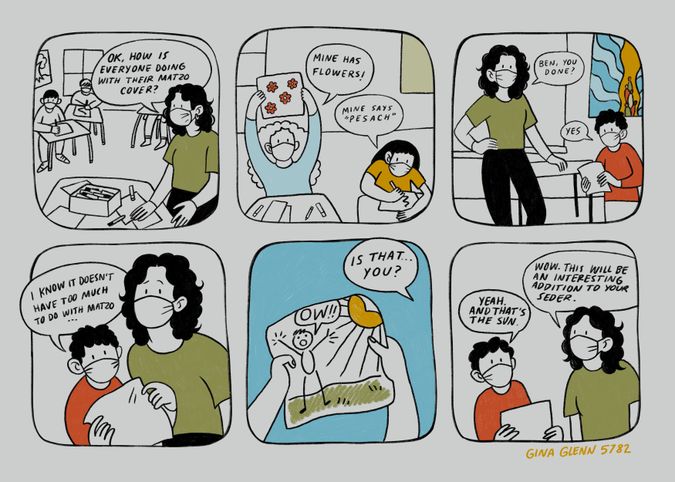 News from Our Newsroom

We’re super proud to have two finalists for Deadline Club awards: our contributing critic Jackson Arn, in Arts Reporting, for pieces on Aaron Sorkin, the similarities between the films “Nomadland” and “Borat 2,” and the enduring appeal of Tony Curtis; and yours truly, in Opinion Writing, for my abortion story, “Your kids’ questions on Israel and Gaza, answered,” and the 9/11 story I never got to write.

Bintel is back — almost! Season Two of your Jewish advice podcast returns later this month, with co-hosts Ginna Green and Lynn Harris answering tough questions about identity, politics, relationships and family, and our archivist, Chana Pollack, bringing historic letters to bear on the conversation. Click here to listen to the trailer and catch up on past episodes; send your questions to bintel@forward.com.

Passover in a pandemic means always being ready to pivot