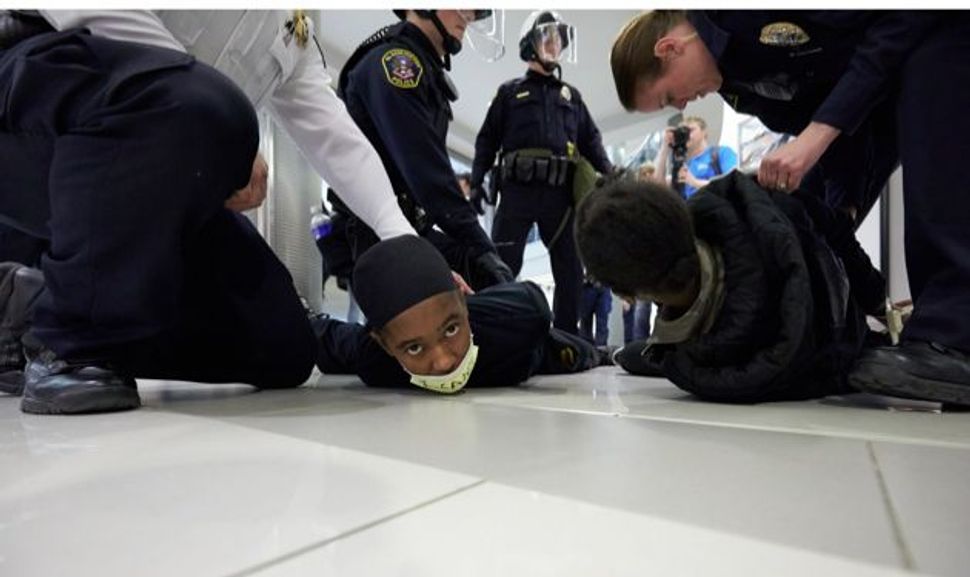 Black Lives Matter: Jewish activists have been part of the protests roiling the country. Image by Getty Images

I couldn’t agree more with J.J. Goldberg’s conclusion in his column titled “First Step to Reflecting Jews’ Real Values? Focus Less on Israel,” published online January 22, that the real issues that motivate Jews to organized political action are classic domestic progressive issues, such as economic inequality, civil rights, reproductive rights and racial justice. But his conclusion that our community has a “desperate need” for a “renewed, genuine agenda” misses a key point.

That movement is already happening, and the institutions he seeks do exist. Many American Jews are already organizing together to fight for justice here in the United States in powerful ways. They are getting arrested at civil disobedience actions on immigration rights, holding candlelight vigils to protest police violence alongside the Black Lives Matter movement, and pressing their congressmen in person and via phone and email to restore the Voting Rights Act. All these are actions we have been proud to lead at Bend the Arc: A Jewish Partnership for Justice, and our rapidly growing organization is evidence that the American Jewish tradition of demanding domestic progressive change is alive and well.

Our organization’s strength is powered by the forces Goldberg notes; he is absolutely correct that many Jews find that the bulk of institutional Jewish life is out of step with their values and does not address the domestic issues that American Jews care most about. That’s why we’re here, to give the many American Jews concerned about inequality and bigotry the space and institutional heft to make a real difference.

Last December we launched a major televised ad campaign deploring the rhetoric of hate aimed at recent immigrants. This election cycle, we’ve launched the first Jewish political action committee dedicated to supporting political candidates who champion a progressive domestic agenda. Our supporters are empowered to take action together by our shared Jewish values and the sense of community that has always given American Jews strength.

Redefining the Jewish political agenda so that it aligns with the political values American Jews hold will strengthen our community and help create a new generation of proud, engaged Jews who can carry on our community’s legacy of fighting for justice. The future of American Jewish political power is likely to look very different than it does today, and our partners in the Jewish Social Justice Roundtable are working to ensure that our institutions reflect our community’s progressive beliefs and priorities.

Stosh Cotler is the CEO of Bend the Arc: A Jewish Partnership for Justice.