Meet the Jews of Color Organizing in Partnership With JVP 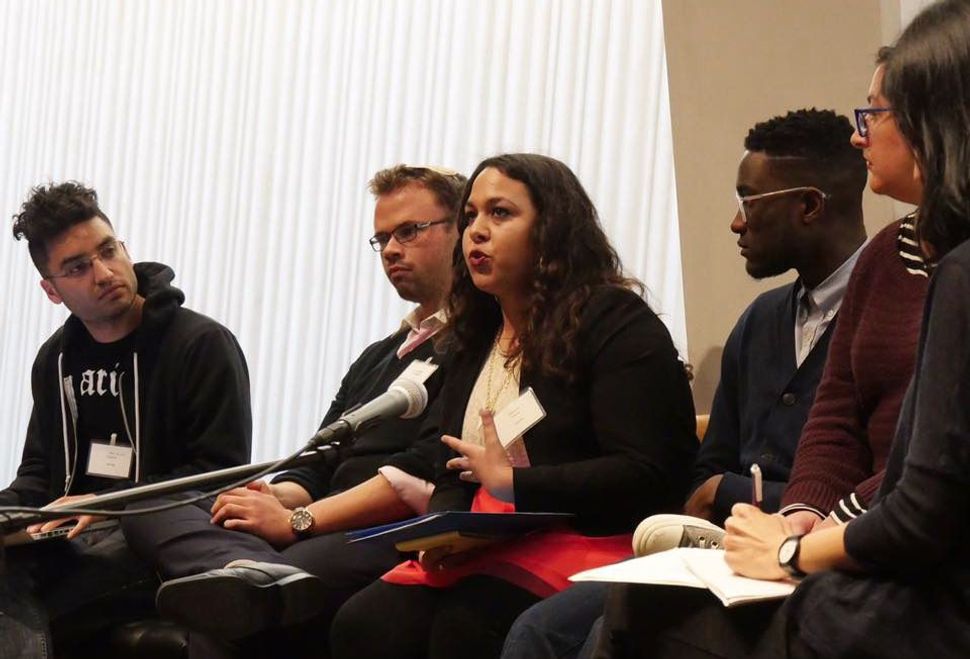 We are three members of the Jews of Color (JOC) in solidarity with Palestine caucus organizing in partnership with Jewish Voice for Peace (JVP) responding to Sigal Samuel’s recent article about the JOC Convening (“Jews of Color Get Personal and Political at First-Ever National Gathering”)”).

We agree with Samuel’s summary of the emotional weight of the convening — the joy of seeing others “like” us for the first time, and the recognition we received in centering each other. The convening was a powerful and historic event.

Our concern is with how Samuel’s article portrays our group not only as “youngish” and by extension naive, but also as having dominated the convening, or that the convening somehow catered more to us than to JOC who do not share our political perspectives on Israel and Palestine. This could not be further from the truth.

We are a group of JOC in solidarity with Palestine who are organizing in partnership with JVP. For us, “Jews of Color” includes Sephardi and Mizrahi Jews, and other Jewish people, like Romaniote Jews, who are minoritized under white Ashkenazi-dominated Jewishness. We share a commitment to the liberation of Palestine and an end to the occupation. We say “organizing in partnership with JVP,” rather than as JVP, because our work is distinct in that it centers racial justice, challenges Ashkenazi-centrism, and because we are autonomous from JVP even as we receive JVP support.

The organizations that planned the convening, Jews for Economic and Racial Justice (JFREJ), the Jewish Multiracial Network (JMN) and Bend the Arc, all claim policies of neutrality on Israel/Palestine, even as their individual members may have strong opinions about the topic. This meant that some of our members were invited to speak on panels that did not mention Israel/Palestine in the title like “Telling Our Stories: Jews of Color, Migration and Diaspora” or “The Role of Mizrahim in our Racial Justice Movements,” and some of us were invited to speak on the panel titled “US Social Movements, Israel/Palestine, and the Role of Jews of Color” only under the auspices that we stick to stories from the United States, and that the panel have equal representation of “both sides,” including JOC who identify as Zionist.

As the power of JOC grows, as it necessarily will, this will be an issue that we hope to think through differently than white, Ashkenazi-centric Jewish organizations. We feel a strong affinity with the other attendees at the Convening based on a shared commitment to racial justice in and beyond Jewish communities, regardless of their politics on Israel/Palestine. Our JOC caucus may be distinct in that we see racial justice and the liberation of Palestine as dependent on one another and therefore central to our work rather than as avoidable through neutrality. We hope to build with them, and other Jews of Color across the United States, a movement for racial justice in the United States, Israel/Palestine, and beyond.

Meet the Jews of Color Organizing in Partnership With JVP