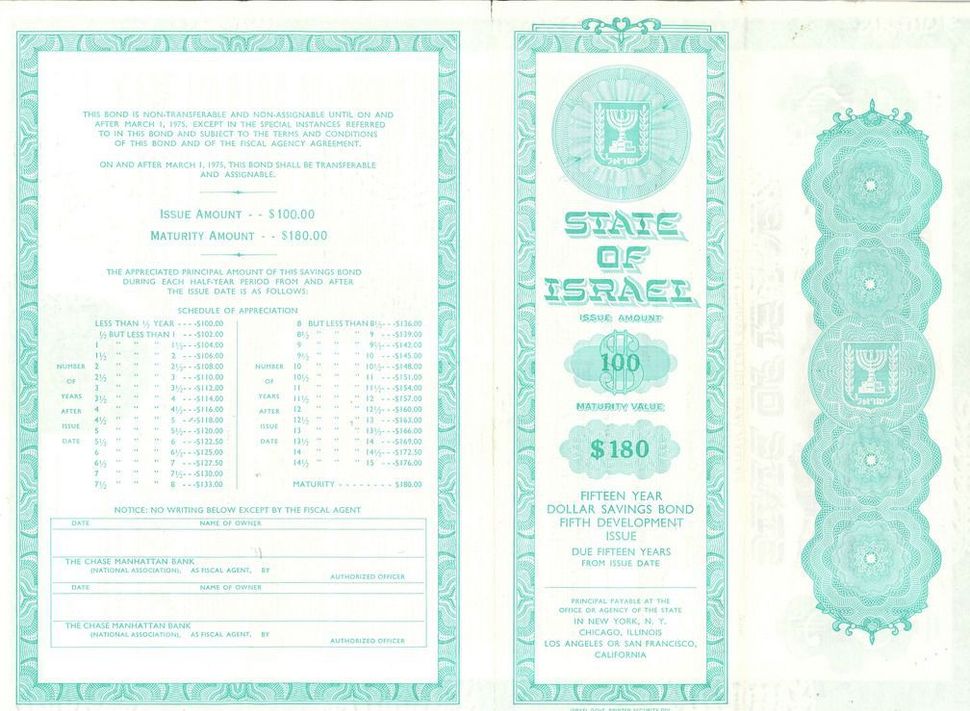 I write this letter with sadness and a heavy heart.

My 5-year Israel Bond came due on February 1. Over the past few months, I have been deliberating whether or not to renew the bond, as I have done for decades. I have decided not to renew, as I cannot support the current Israeli government and the perilous direction in which it is headed. I am concerned that investments in Israel bonds, which are focused on infrastructure, are being used in expanding the disastrous occupation of the West Bank.

Let me provide some context on why this is a difficult decision. I have owned Israeli bonds continuously since the day I was born, over 60 years ago, starting with gifts from my grandparents. At that time, these investments were substantially more risky — but this was part of our culture and we invested in them proudly.

I am a lifelong supporter of Israel, have 12 years of Jewish day school education, and speak Hebrew fluently. I have visited Israel frequently since 1970 and thoroughly and proudly enjoy the feeling of walking the streets of a Jewish state. Professionally I have established major collaborations there through my work as a Professor of Medicine (Infectious Diseases) at Johns Hopkins. In particular, I am proud that I established these collaborations and visited Israel frequently during the worst days of the intifada, in the early 2000s to show support for my friends, colleagues and family.

However, there is a foreboding reality which has been brought on by the occupation and the Netanyahu government. The continued development of the West Bank has occurred with almost a chutzpahdik quality, and cannot have occurred without the continued infrastructure support provided in part by Israel Bonds. I have visited the West Bank, and observed the impact of the occupation and its dehumanizing effect on both the Palestinians and the Israelis. The Netanyahu government and its ministers have clearly stated directly and by their actions their intent to scuttle the 2-state solution.

I anticipate that some will respond to my letter and point out that the issue is that of the Palestinians, the Arab States, UN anti-Semitism and more. These external forces are not the issue. The issue is about us, how we see the world, and what we are becoming.

I choose now not to invest in a government enterprise which I believe is not investing in Israel’s or my interests.

Secretary of State John Kerry stated in December: “If the choice is one state, Israel can either be Jewish or democratic, it cannot be both, and it won’t ever really be at peace.” Based on the current course of policy, is this not a true assessment? (Rather than criticize Kerry via sound bites, read the whole speech).

“it [i.e. the State] will foster the development of the country for the benefit of all its inhabitants; it will be based on freedom, justice and peace as envisaged by the prophets of Israel; it will ensure complete equality of social and political rights to all its inhabitants irrespective of religion, race or sex.”

Finally, I choose not to invest an a government whose Prime Minister, many religious leaders and Knesset members, and ambassador enthusiastically welcomed the US presidency of an individual who is clearly unfit, who personally and professionally contravenes the Jewish and universal values which I cherish, and who has unleashed the most toxic wave of bigotry, anti-Semitism, and religious and ethnic intolerance in my lifetime.

I will continue and contribute in Israel, but to organizations who are in concert with the original vision of state’s founders.

_Jonathan M. Zenilman is a physician in Maryland. _