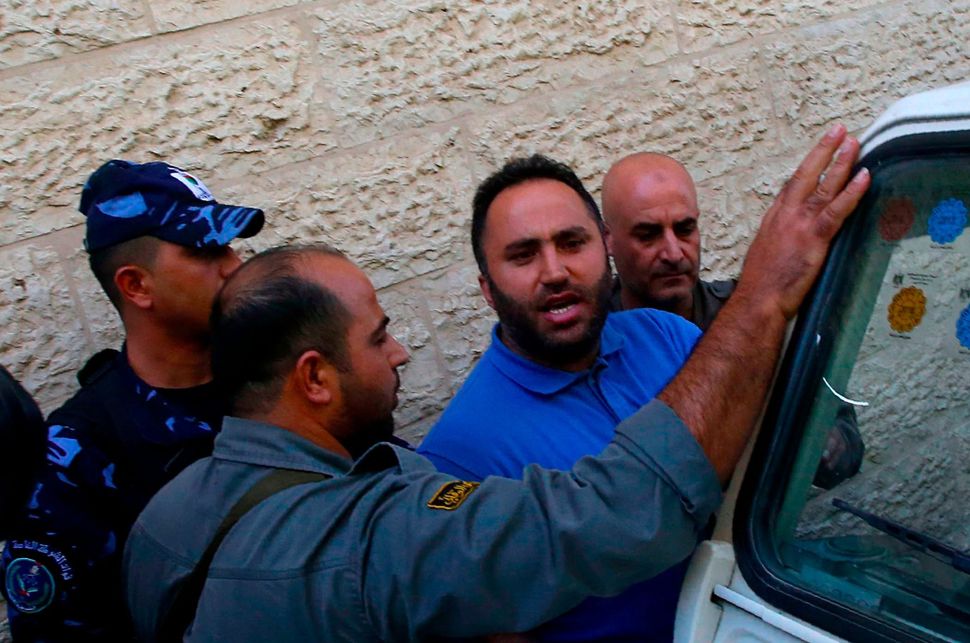 It has been almost a week now that Palestinian nonviolent activist Issa Amro has been imprisoned by the Palestinian Authority (PA). Issa’s crime was a Facebook post criticizing the PA for their arrest of journalist Ayman Qawasmi. Before submitting himself for questioning and likely detainment, Issa prepared a statement: “My arrest will not affect my defense of human rights and the rights of journalists to exercise their work freely and without pressure from the government.”

Issa’s arrest has been covered by news outlets across the world. Amnesty International and the UN Office for Human Rights have put out press releases and statements. Nine US congress members wrote a letter to Palestinian President Abbas calling the charges against Issa baseless and asking for him to be released.

Issa is well known as being one of the first sources of information for journalists reporting on Hebron, where Issa is located. He is the go-to person for diplomats, officials, and politicians when they visit Hebron, the most heavily occupied city in the West Bank. But, what is less spoken about is how essential Issa is to the desperate and suffering Palestinian community of Hebron.

Hebron is the most desperate and struggling of all the Palestinian communities living under Israeli military occupation. The setter movement of Hebron is well known to be violent, extreme and driven in their goal to take the city. Accordingly, Hebron is the only city where settlers have implanted themselves in the heart of the Palestinian population.

The unemployment rate in Hebron’s old city, where illegal Israeli settlers, backed by the Israeli government and military, have forcibly taken up residence in the center of the Palestinian population, is over 70%. Israeli army and police have been placed throughout the streets with numbers assigned to Palestinian residents in order to regulate who may and may not enter. Regularly, families wake to find their water lines have been cut by settlers. This past summer, settlers occupied a Palestinian home and Israeli soldiers responded by setting up a perimeter to safeguard the settlers. Oppression and hinderance are daily sufferings for the Palestinian residents as the settlers and Israeli security forces coordinate and collaborate.

It isn’t a far stretch to say Issa singlehandedly has kept the central Hebron neighborhood of Tel Rumeida from being overtaken by settlers. Issa is known for rushing to houses when they are invaded by soldiers and, in calmer moments, organizing volunteers to repair the cracked walls of houses. When a child, or adult for that matter, is harassed by settlers, Issa stands in the way and ensures safety, even at his own peril, and leads maintenance, rehabilitation and logistical efforts to allow the community of Tel Rumeida to survive the siege that it is enduring.

In any other place you might think a rental agreement with the owner would be enough to take residency of a property, but not in Hebron. The settlers, though they had no legal claim to the house, refused to leave. So, Issa organized Palestinian activists to sleep in the yard of the house. They planned nonviolent actions, went to the courts and asked their Israeli supporters join them. Issa and his supporters were physically attacked and arrested. However with Issa’s leadership they remained undeterred and were justly victorious. Today the house is the center of Tel Rumeida life and Issa’s home. Volunteers from around the world come and stay, children play in the yard, and youth take English lessons and participate in nonviolent trainings.

One of the latest episodes of occupation in Hebron is a fence that encloses the Salayma neighborhood in the center of Hebron. In 2012, the Israeli military placed a fence in the road between the neighborhood and the Ibrahimi mosque. One side of the fence was designated for Jews and the other, a smaller broken pavement side, for Palestinians. In June 2017, this fence was extended to encircle and imprison the neighborhood entirely. A single door was placed for entry and exit. Each night the residents are locked in this prison between 11pm and 6am.

After the fence was extended, Issa began meeting with the families living imprisoned inside the fence. They talked, organized and planned. Last week, under Issa’s leadership, the neighborhood began a campaign of nonviolent protests with children leading the way. The residents held signs and chanted. Families, those who had spent months feeling stripped of their dignity and freedom, felt alive again, motivated with the spirit and drive for self determination.

Community building and the quest for justice and freedom, including the freedom to criticize one’s government on Facebook, is who Issa Amro is. It is why Palestinian families look to him for guidance and safety. It is why progressive Israeli and American Jews, many of them stepping foot on Palestinian soil for the first time in their lives, seek his leadership. It is also why Issa is such a big threat to Israel’s system of occupation and the PA’s insistence on cracking down on freedom of expression. Because of his commitment to his people and his courage against the Occupation, Issa is currently facing 18 charges in Israeli military court and now three charges in PA court.

Issa’s devotion to the struggle for freedom provides inspiration to progressive and resistance movements around the world. It also might find him jailed by one, if not two, governments. While those of us, including myself, fear what we will lose internationally if he is imprisoned, we also must keep in mind that it is the Palestinian community in Hebron that will suffer the the most in his absence.

Ariel Gold is a Jewish-American who works closely with Issa Amro. She is the campaign director for CODEPINK Women for Peace.